Delang district is different than many parts of Central Kalimantan. Namely, on the drive in from Nangabulik, you won’t see large-scale oil palm plantations, and the forest appears to be well maintained. This is because the locals are keenly aware of the importance of their land at the headwaters of the Lamandau River. Where the water leaves their land, it flows clear and is abundant with fish. The forest produces enough fruit to both feed them and provide a source of income. Game is still abundant for occasional hunting. In short, the land is healthy, and they want to keep it that way.

To protect the forest, the community has adopted “hukum adat,” or customary law, which prescribes penalties for damages to the environment based on extent. For example, destroying a sacred site or a honey tree carries more weight, and a heavier penalty, than simply clearing an area of forest. The most severe transgressions may result in someone being expelled from the community. This river in Delang runs clear because it is still surrounded by forest. Photo by Indra Nugraha.

The conservation spirit is largely the result of two local traditional leaders, Repudi Sigun and Silpanus Yamaha. They aggressively educate their neighbors about the importance of community forests, and encourage them to reject mining and oil palm companies that would provide short-term compensation for long-term consequences. In response to their coordinating efforts, nine villages have united to keep the forests intact.

Repudi Sigun, now 64 years old, serves as the chairman of the Delang Alliance of Indigenous Peoples. Several years ago, he traveled to Thailand to study techniques for growing rubber trees. While there, he was impressed by the quality of the forests, and lack of oil palm.

“I didn’t see a single oil palm tree,” he remembers. “At the end of the trip, we met the king of Thailand, and I asked him why. He answered: because in 50 years, he doesn’t want Thailand [to] end up like Somalia—having to become pirates because the environment was destroyed and the land unable to support gardening.” 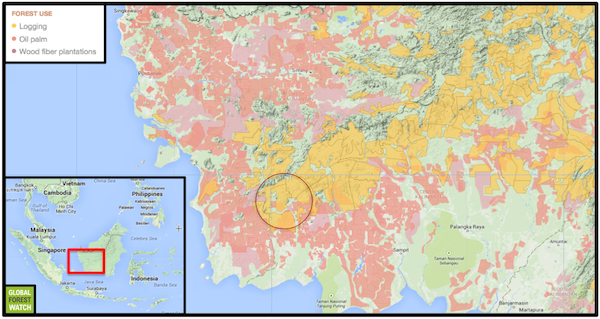 Like most of Indonesian Borneo, the province of Central Kalimantan is rife with timber and plantation concessions. The area comprising Delang District (circled) is particularly affected by logging, according to Global Forest Watch. Data from the forest monitoring site shows the region lost approximately 125,000 hectares–16 percent–of its tree cover from 2001 through 2012. However, some of this may be due to plantation harvesting as oil palm and wood fiber concessions also occupy the area. Click to enlarge.

That bleak prospect for the future affected Repudi deeply. Upon his return home he began educating his community on what he believed to be a more sustainable future.

His role as a leader in community opposition to oil palm has gained the attention of companies hoping to sway public opinion. For several years, investors have come to him offering increasingly larger benefits if only he would help them establish oil palm in the community. The last offer was 25 million rupiah ($2,060) a month, and a house in Jakarta. “I still refused,” he said.

Failing to sway Repudi, the investors approached his younger counterpart, Silpanus, offering him 15 million rupiah ($1,235) per month and a car. He also refused, saying there is no amount of money that could justify disrupting his community and destroying the future of his grandchildren.

“Our forests are still very good. People can still hunt and farm here. The water is still clear an uncontaminated. It supports our health. If the area becomes oil palm, we will no longer be free. If [we] want to enter the forest, we have to check in first with the company. Soon they will think we are thieves,” Silpanus said. 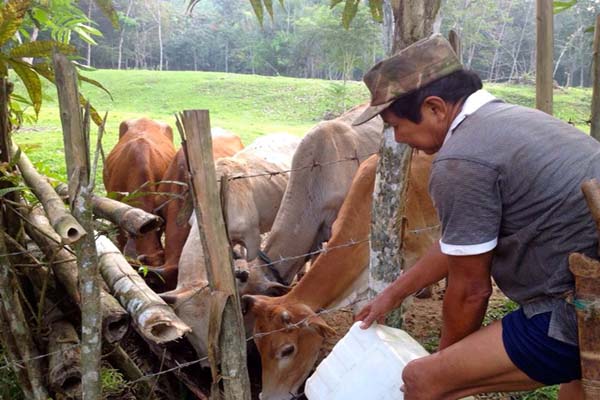 A local man tends to his cattle. In addition to using natural resources of the forest, communities engage in small-scale agriculture. Photo by Indra Nugraha.

However, despite community opposition, the government of Lamandau Regency recently issued a permit to oil palm company PT Sawit Mandiri Lestari to establish a plantation near the village of Riam Penahan.

To prevent plantation development, the residents of Delang must quickly establish proof that the community forests belong to them. They have begun working with Indonesian Friends of the Earth (Walhi) to create a map of customary use forests, which they hope will provide them with some legal standing.