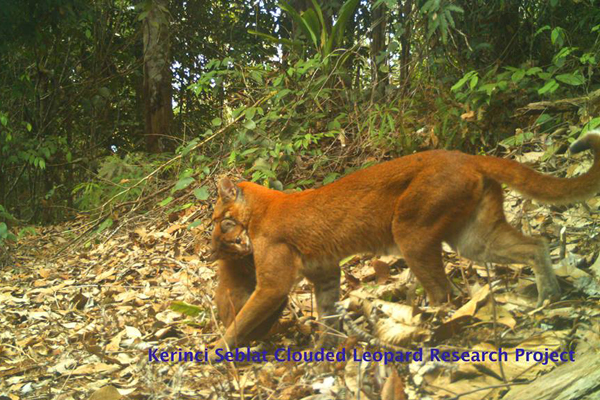 A mother Asian golden cat holding her cub, who was caught on camera trap in the Kerinci Seblat National Park in Sumatra. Photo by: Sumatran Tiger Research Team.

Researchers working in Kerinci Seblat National Park have captured a remarkable image of a mother Asian golden cat (Catopuma temminckii) carrying her young in her mouth. The image was taken in mid-2014 as reported by Mongabay Indonesia by the Sumatran Tiger Research Team.

The Asian golden cat is a medium-sized feline, around two to three times heavier than a domestic cat. It ranges across Southeast Asia and is currently listed as Near Threatened by the IUCN Red List. Like many other predators, the cat is threatened in the region by deforestation, prey decline, snaring, and the illegal trade in cat bones and parts. In Indonesia there is a thriving trade in these wild animals over the Internet, according to Mongabay Indonesia. Worse still, Sumatra has one of the highest deforestation rates on the planet.

Still, Asian golden cats remain much less threatened than Sunda clouded leopard and marbled cat (both listed as Vulnerable), and, of course, Sumatran tigers which are considered Critically Endangered.

Haidir further noted that researchers have found that Asian golden cats and Sunda clouded leopards generally avoid each other, i.e. where there are a lot of Asian golden cats there are few Sunda clouded leopard and vice versa. But in areas with large prey densities, these two species appear to live side-by-side and even share their territory with the island’s top predator, the Sumatran tiger.