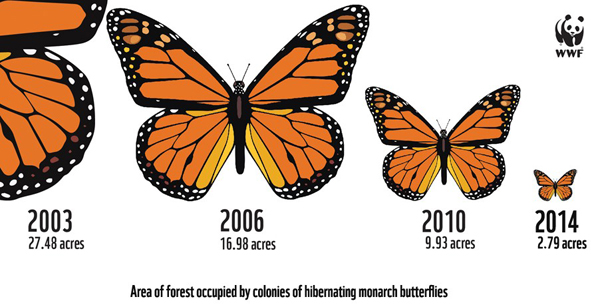 The shrinking of the migrating monarch butterfly population. Image by: WWF.

The world’s migrating monarch butterfly population has bounced back slightly from its record low last year, but the new numbers are still the second smallest on record. According to WWF-Mexico and the Mexican government, butterflies covered 2.79 acres (1.13 hectares) in nine colonies this year in the Mexican forests where the insects overwinter. This is a 69 percent increase from last year’s nadir of just 1.65 acres (0.67 hectares), however, the new numbers remain hugely concerning.

“The population increase is welcome news, but the monarch must reach a much larger population size to be able to bounce back from ups and downs,” said researcher Tierra Curry with the Center for Biological Diversity, adding that “this much-loved butterfly still needs Endangered Species Act protection to ensure that it’s around for future generations.”

Last month, the U.S. Fish and Wildlife Service said it would consider adding the vanishing insect under the country’s Endangered Species Act. Currently, the monarch butterfly (Danaus plexippus) is not at risk of extinction, but its migration is. Monarch butterflies in the Eastern U.S. are famous for their epic migration spanning some 1,900 to 4,500 kilometers (1,200 to 2,800 miles) from Canada to the mountains of central Mexico every year. Each migration takes several monarch generations to complete, often three to four.

In the 1990s—when scientists first started counting the area filled by migrating monarch butterflies in Mexico—the overwintering habitat never dipped below 13 acres (five hectares). The largest population covered 44.95 acres (18.19 hectares) in 1993. But the trend over the last decade has been one of extensive decline, with various rises and falls.

Annual area of monarch butterflies overwintering in Mexico from 1993-2014. Image by: WWF.

A decade ago, conservationists were largely concerned with deforestation and illegal logging in Mexico’s overwintering forests. However, due to work by indigenous groups, locals, and the Mexican government that threat has been largely neutralized, at least for the time being. Today the biggest threat is the loss of food and habitat across the U.S. and Canada due to herbicides and increasingly intensified agriculture.

According to WWF, herbicide use in the U.S. for soy and corn killed off 58 percent of the country’s milkweed from 1999 to 2010, resulting in a monarch decline of 81 percent. The development of genetically modified crops has exacerbated the situation as these crops are resistant to the popular herbicide, Roundup. However, Roundup and other herbicides containing glyphosate decimate milkweed populations. Monarch butterfly caterpillars feed solely on milkweed, meaning the species requires a road of milkweed from Canada through Eastern and Central U.S. down to Mexico in order to survive. But agriculture policy in the last couple decades, especially in the U.S., has resulted in a massively fragmented milkweed route.

“The 2.79 acres occupied by monarchs this winter should serve as additional motivation for the leaders of Canada, Mexico, and the United States to translate the commitment they made in Mexico in February 2014, to concrete and immediate actions,” said Omar Vidal, Director General of WWF-Mexico. “It is crucial that we restore and protect the habitat of this iconic species in all three countries, but above all that we limit the use of herbicide and land conversion in the United States and maintain efforts to avoid deforestation in Mexico.”

Conservationists say that planting milkweed in gardens may benefit the monarch, however gardeners must plant they right variety of milkweed and make sure the milkweed hasn’t been coated with a popular insecticide in the neonicotinoid family. Research has shown that neonicotinoids may harm pollinators, such as bees and butterflies.

Monarch butterflies aren’t the only pollinators in trouble, many of the world’s pollinators have undergone drastic declines in recent decades. Experts point to possible impacts such as pesticides, habitat loss, and disease.