Sorting fish on an Malaysian fishing boat. Photo by Rhett A. Butler / mongabay.com

Climate change is already having a severe impact on the atmosphere and oceans around the world. These changes are also impacting specific economic sectors including the fishing and aquaculture industries. According to a recent report by the European Climate Foundation, the Sustainable Fisheries Partnership and the University of Cambridge, the fishing industry is projected to lose tens-of-billions as the world continues to heat up.

“Current estimates of the total loss of landings to global fisheries by 2050 due to climate change range between USD $17 and $41 billion, based on a global 2°C warming scenario,” the authors concluded “Losses are likely to be highest in East Asia and the Pacific. Acidification is projected to drive a decline in global shellfish production between 2020 and 2060.”

This report, published last year, synthesizes key findings from the Intergovernmental Panel on Climate Change’s (IPCC) Fifth Assessment Report (AR5). It highlights the impacts of climate change on the seafood production with an aim to make IPCC findings more accessible to the fisheries and aquaculture sector.

While the study details the work of the IPCC, it also provides some additional assessments. It concludes that climate change will hurt the fishing industry on a global level, especially impacting the 400 million people who rely on fish as a main food source. Global warming’s impacts are expected to be the most devastating in the tropics and Antarctica where fishing yields are estimated to decease 40 to 60 percent. 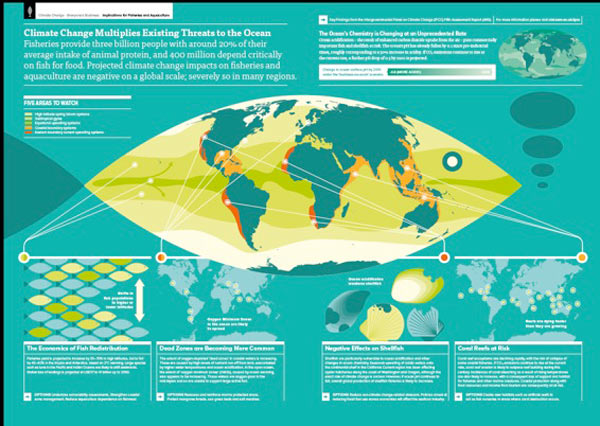 Burning fossil fuels, deforestation, and industrial agriculture has led to a spike in carbon dioxide levels in the atmosphere resulting not just in rising atmospheric and marine temperatures, but also in ocean acidification. According to the study, increased carbon dioxide in the ocean, which decreases Ph levels, has far reaching consequences on tropical and cold water coral reefs. Half of the world’s coral reefs are in jeopardy of being degraded or lost forever due to the combined impacts of rising marine temperatures and ocean acidification. In addition, ocean acidification will negatively impact shellfish populations as they find it more difficult to form shells in acidic waters.

However, even with all the negative effects, climate change could provide some benefits to the aquaculture industry in specific regions. The study asserts that climate change may help fish grow at faster rates, expand habitats for some species, and improve feed conversion rates and increase fishing yields between 30 to60 percent in high latitudes. But overall, the impacts are expected to be dire.

The authors offer some recommendations for adapting to the harmful effects of climate change including reducing carbon pollution, relocating hatcheries, finding new fishing locations, using selective fishing gear, and incorporating improved management polices. Unfortunately, so long as climate change keeps progressing it will be difficult for these adaptation strategies to succeed. On a larger scale, the IPCC says there must be considerable and sustained reductions in greenhouse gas emissions in order to mitigate the negative consequences of climate change.

Overall, the IPCC Fifth Assessment Report provides a grave assessment of the impacts of climate change on the environment stating that “warming of the climate system is unequivocal, and since the 1950’s, many of the observed changes are unprecedented over decades to millennia. The atmosphere and ocean have warmed, the amounts of snow and ice have diminished, and the sea level has risen.”

The IPCC was established in 1988 by the World Meteorological Organization (WMO) and the United Nations Environment Programme (UNEP). The first installment of the AR5 was released in 2013. The final synthesis report was introduced at the UN Climate Change Conference in Copenhagen, Denmark last November. The full document can be found here.