A farmer from the village of Pamulukkang with his cocoa tree. Photo by Revelation Chandra.

Irda tends to his two-hectare timber plantation in Pamulukkang Forest at the base of Tanete Kindo Mountain in West Sulawesi. Unlike some other farmers in Indonesia, he does so without fear of harassment by forest rangers or police. Since 2008, he has been involved in the Community Plantation Forest (HTR) program—an initiative by the Indonesian government to restore degraded lands by encouraging locals to plant and manage commercially sustainable forests.

“Through HTR, the people were given the right to manage the land under the condition that we must plant before harvesting—instead of taking what already exists,” Indra explained to Mongabay-Indonesia. “In addition, we must also plant a wide variety of crops.” 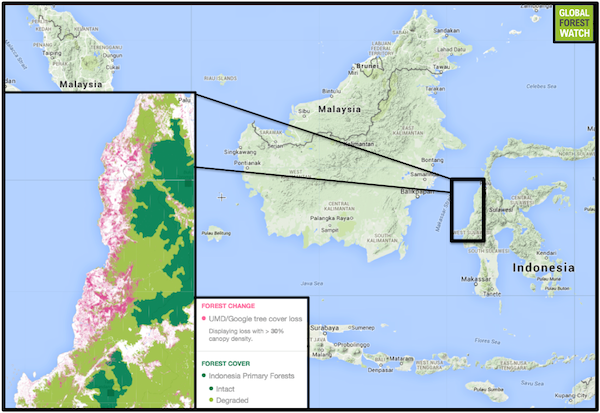 Sulawesi has not been as affected by deforestation as many other parts of Indonesia, but much of its remaining primary forest has still been degraded by human activity. According to Global Forest Watch, West Sulawesi lost approximately 133,000 hectares of tree cover from 2001 through 2012, representing about 13 percent of the province’s total forest cover (however, some of this is likely due to plantation harvesting). Click to enlarge.

Indra’s plantation now contains many species of trees including cocoa, hazelnut, coffee, rubber, and palm sugar—which all serve as a rotating source of income.

“Every day, I’m working in the cocoa trees, while at the same time keeping the fires warm to process sugar,” he says. His garden produces around 150 kilograms (330 pounds) of cocoa per harvest that he sells for 33,000 rupiah ($2.55) per kilogram, netting him up to 4.9 million rupiah ($380) per harvest. But like farmers everywhere, his earnings fluctuate with the fickle changes of nature.

Irda intends to plant more sugar palm in his garden, hoping to increase production. He says a given tree will produce sugar for up to a month with four months between production cycles. Of the 10 trees he currently cultivates, three are usually active at any given time. Coffee is also a consistent producer, which keeps a little income flowing during lean periods. Forest near the village of Pamulukkang that the community maintains while also using for agroforestry. Photo by Revelation Chandra. Palm sugar is made by tapping sap from certain palm species and boiling it down, much like how maple syrup is made in North America. Photo by Revelation Chandra.

As for timber species, Irda prefers to grow white teak, which matures quickly. Currently, a healthy stand of 30 trees he planted five years ago with government assistance provides cool shade for his other crops.

“I can use those trees to build a house. I harvest what I plant, and plant what I harvest,” he says, indicating a cluster of seedlings that waits nearby, ready to planted.

When the HTR program was first established, experts came to the community to teach farmers like Irda how to effectively plant and manage forest species. Although the training has ended, Irda and his neighbors continue to benefit from the knowledge they gained, continually preparing and raising the next batch of seedlings while working with other farmers to improve forest management techniques.

Data from the Forestry Department of West Sulawesi indicates the province recognized 32,860 hectares of HTR as of 2013. Irda serves as the secretary of the Sikari Manangi group, a collective of 27 farmers that manages plots ranging from two to 200 hectares in size. Although the program has official government recognition, their land is not entirely safe. Several groups of illegal loggers from outside the community have been caught harvesting trees in the forest. As development pressures increase from nearby population centers, the residents fear that without proper enforcement, the encroachment eating away at the edges of Pamulukkang forest will only get worse.