When Víctor Zambrano retired from the military and returned to his family’s old homestead outside the fast-growing jungle town of Puerto Maldonado in Peru, he got an unpleasant surprise. Strangers had moved in and cleared the trees to raise cattle.

As Zambrano tells it, he ran up the Peruvian flag, chased the invaders off, and set to work planting 19,000 native tree seedlings.

Today there is no trace of the cow pasture as he strolls the grounds of the place he calls the Refugio K’erenda Homet, a melding of words from the Harakmbut and Ese’eja languages that means “brilliant dawn.” 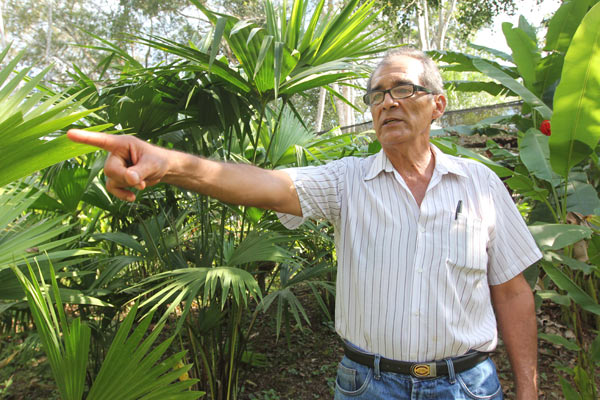 Víctor Zambrano points to one of the many native trees he planted to reforest his family’s homestead after squatters had turned it into cattle pasture. Photo by Barbara Fraser.

The recovery of his property, in the buffer zone of the iconic Tambopata National Reserve, was so successful that it was designated one of the first private conservation areas in Peru’s environmentally embattled Madre de Dios region.

Madre de Dios is best known for the high-end eco-lodges, especially around Tambopata and Manu National Park and Biosphere Reserve, which draw tens of thousands of foreign tourists a year.

Zambrano, and a group of like-minded neighbors along a 12-kilometer stretch of dusty road in the Tambopata Reserve’s buffer zone, also welcome tourists, but what they offer is as much a way of life as it is a business. Many of these new businesses—like Zambrano’s–are run by the grown-up children of families that settled along the Tambopata River toward the end of the last century’s rubber boom.

The landowners originally sought to buffer the urban sprawl they expected to follow the paving of the Interoceanic Highway, a coast-to-coast route that now passes through Madre de Dios. They joined forces through a mitigation program launched by the highway construction companies, a local nature tourism operation, and several environmental organizations.

The result, called the Isuyama Lower Tambopata Tourism Corridor, is a varied array of community tourism options aimed at Peruvians, people spending a few days in Puerto Maldonado for business or pleasure, or foreigners who want to combine nature tourism with a chance to meet local people, says Pierina Zlatar, one of Zambrano’s neighbors.

Tourism statistics suggest they have found a growing niche.

The number of tourists visiting Tambopata more than doubled between 2005 and 2013, from about 15,000 to 39,400. Although the majority are still foreigners, the Peruvian share skyrocketed during that period, from 550 to 6,200.

At Zlatar’s Kapievi Ecovillage, a back-to-the-land B&B that also has some year-round residents, visitors can combine an early-morning yoga session with a trip to a lake or an art session with some local Shipibo women.

Down the road, Magali Salinas takes in injured or abandoned wild animals and nurses them back to health for release, if possible. If not, they become permanent residents of her Amazon Shelter, where visitors who come to work as volunteers help with feeding and other chores.

But, it’s still the Tambopata National Reserve that really draws people to the area.

“The reserve is the area’s main attraction,” confirms Vladimir Ramírez, the head of the protected area. He sees the community tourism operations, which are located in the reserve’s buffer zone, as directly benefiting from the park. Some small operations take advantage of their location by offering excursions into the reserve, while the conservation area serves as a breeding ground for wildlife that also inhabits the buffer zone, Ramírez says.

Landowners in the ecotourism corridor generally agree, but some would like to see the reserve offer more support for small operators, such as joining forces to seek funding.

A bigger issue, they say, is lack of control over illegal activities in the buffer zone, which suffers from illegal logging and illegal gold mining that has left parts of the landscape barren and cratered.

The mining worries Ramírez, too, but he says he lacks complete jurisdiction over the buffer zone. Other government agencies, including national or regional mining, agriculture and development offices, must also agree on policies. 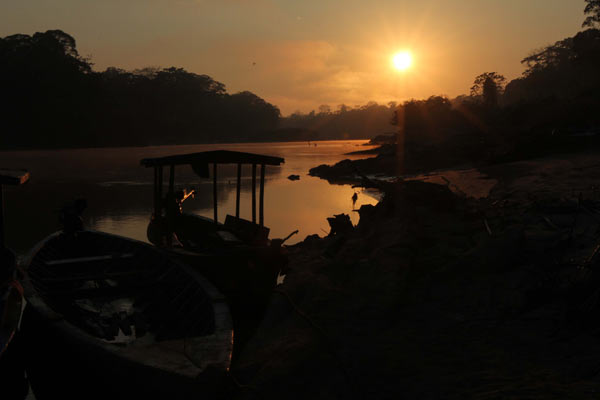 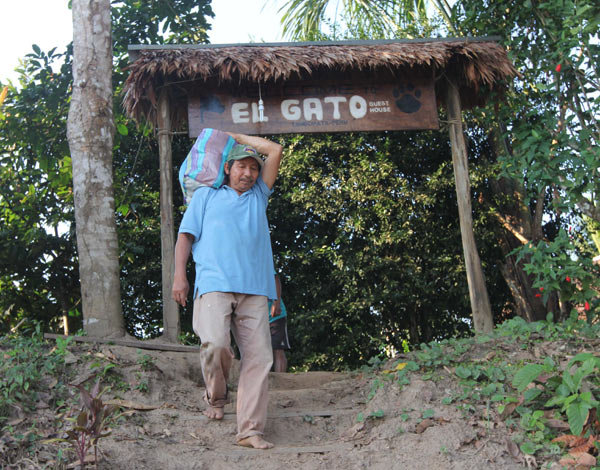 Ramírez praises government efforts to crack down on the mining, but acknowledges persistent reports that miners undermine them by dodging police raids.

Upriver, in the tiny farming community of Baltimore, there is a history of mixed feelings about the reserve. When the protected area was created, residents were angry because authorities limited traditional activities such as hunting, fishing or cutting trees, says Eduardo Ramírez (no relation to Vladimir).

“People felt humiliated, marginalized, abandoned, and they left,” he says.

The population dropped from about 60 families to a low of a dozen at one point, he says. Baltimore also lacked good health care and a school, but Ramírez insists that “most left because they couldn’t keep doing what they had been doing.”

The reserve chief, Vladimir Ramírez, points out that Tambopata is classified as a mixed-use area, precisely because there are communities and a city nearby. Many people depend on the reserve’s resources—from game animals to Brazil nuts—for subsistence or income. People can still hunt or extract other resources from the park, but they must abide by limits or have plans approved by the Peruvian park service.

Better communication when the reserve was created would have helped, but relations have improved over time, Eduardo Ramírez says. 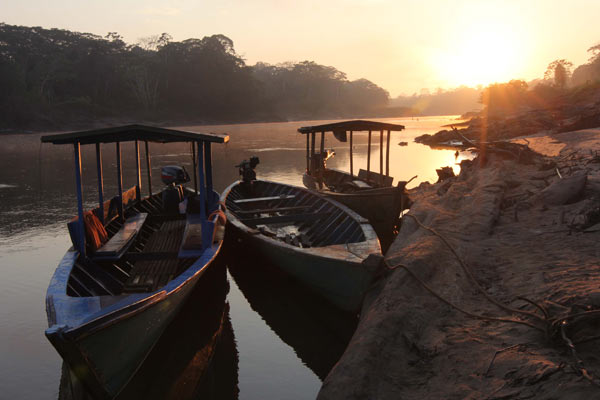 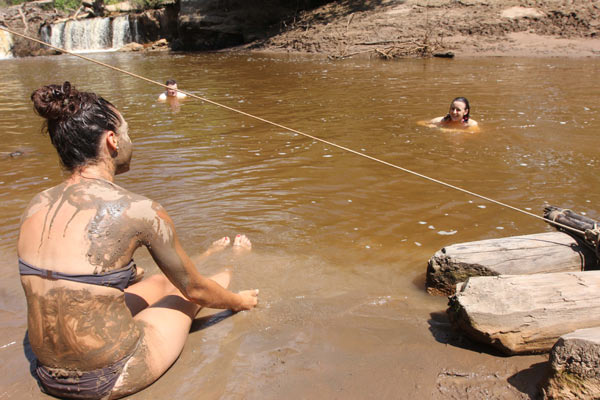 “That’s how people made a living,” he says. “If you’re going to take away people’s source of income, you have to offer them an alternative.”

A handful of the families that stayed in Baltimore opted for tourism. With help from several non-governmental development projects, they capitalized on their novelty, setting up a community-based operation where visitors can pitch in with everyday activities such as harvesting cacao or preparing palm to thatch a roof, along with nature hikes and afternoon dips in a stream. The enterprise is small, partly because of limited capital and partly because of its location.

While visitors can reach the Kapievi Ecovillage, Zambrano’s Refugio, or even Salinas’ animal rescue shelter easily from Puerto Maldonado by taxi or motorized tricycle, traveling to Baltimore means hiking 15 kilometers through farms and forest or taking a boat up the river, which is faster, but more expensive.

The hike and the chance to interact with families appeal especially to younger tourists say Eduardo Ramírez and his brother Víctor, who offer lodging and other activities at their family’s homestead, El Gato.

One advantage, they say, is that their property, which became a private conservation area in 2012, abuts the Tambopata Reserve. This helps ensure that the forest will remain intact as the Interoceanic Highway brings more people into the region, they say.

“Without the reserve, I think this area would be more stripped of resources—fewer animals, more people,” Eduardo Ramírez says. 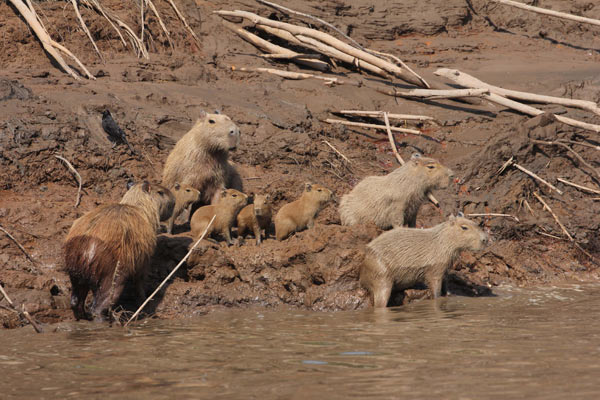 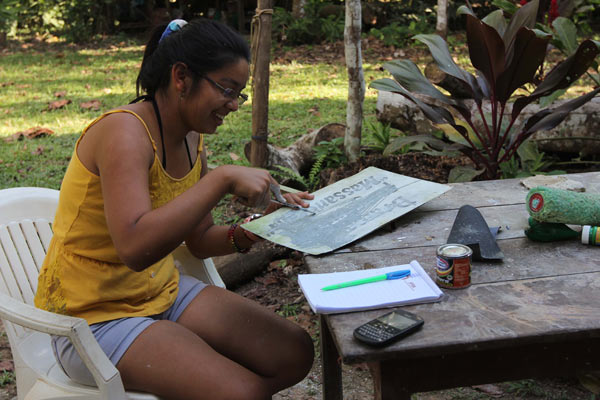 K’erenda Zambrano paints a sign for her family’s private conservation area, which was the first in the region. Photo by Barbara Fraser.

Madre de Dios’ protected areas could anchor more community-based or family-run rural tourism, but such operations face particular hurdles, says Kurt Holle, one of the founders of Rainforest Expeditions. The company operates three lodges along the Tambopata River and provided guidance for setting up the tourism corridor and the enterprise in Baltimore, as part of a project to mitigate impacts of the Interoceanic Highway.

One Rainforest Expeditions tourism initiative began as a partnership with a local community, an arrangement that proved more complicated than expected.

The original plan was to employ community residents, share profits, and turn over operation of the lodge to the mixed Ese’eja-mestizo community of Infierno after 15 years. It took 20 years, with ups and downs along the way, but the community now runs most of the operation, Holle says.

“When we started the project, we didn’t know what tourism was,” says community president Ronald Mishaja.

About 150 of the community’s more than 600 families currently participate in the business and share in the profits, which have grown steadily from less than $100 a year per family at the beginning to more than $1,000 a year now, he says.

A percentage also goes to community projects, which have included a new community building, loans for students, and efforts to keep the Ese’eja culture and language alive.

Infierno’s location—on the Tambopata River, but accessible by road from Puerto Maldonado—has made it a convenient launching point for boats going to lodges upriver, but the goal is to turn the village itself into a tourist destination, Mishaja says.

Tourism is easier and more profitable than eking out a subsistence living in the forest, he says, but it requires a different mindset. 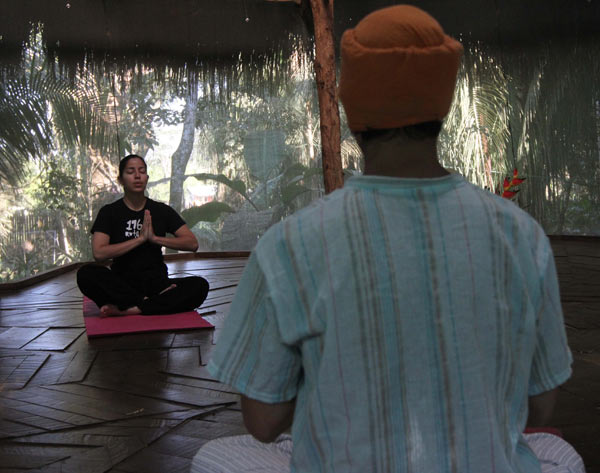 Days at the Kapievi Ecovillage begin with yoga against a backdrop of trees and bird calls. Photo by Barbara Fraser. 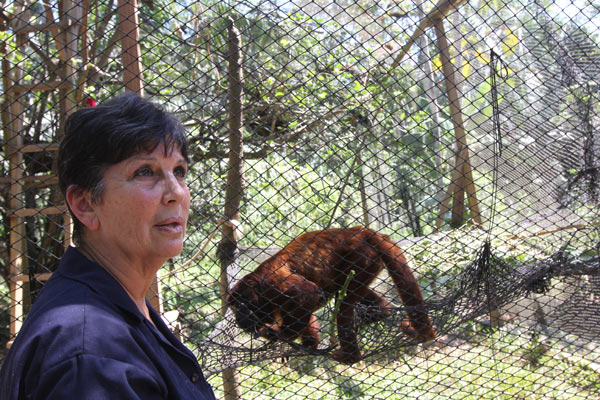 The injured and abandoned animals at Magali Salinas’ rescue center range from monkeys and macaws to deer and peccaries. Photo by Barbara Fraser.

The first key is consistency, says Holle, who believes there is room in the market for both high-end and low-cost tourism services, but they must offer consistent service for the amount they charge.

Then there’s communication with potential customers.

“You have person trying to get to you and you might be out on the farm cutting bananas,” Holle says. “If you don’t answer that phone or email, you’ve lost a sale. One of the principle reasons why community-based tourism doesn’t work is because people aren’t synched into the response time of today.”

That’s the down side of the digital age, but there are advantages, too, as tourist-geared websites geared help start-ups get their first referrals even if they don’t have a booking agency.

The partnership between his company and Infierno taught Holle the importance of building trust, but it also taught him the difficulties of keeping disagreements over business from getting personal in a place where people are both business associates and neighbors.

He sees additional possibilities for community-based tourism in other areas near Madre de Dios’ protected areas, especially Lake Sandoval in Tambopata and the indigenous communities around Manu.

“Anywhere where there’s a community that’s not too far away and has good forest around it, there’s potential,” he says. “It’s not going to be very big, but it might (benefit) hundreds of people a year.” And it might keep the forests standing. 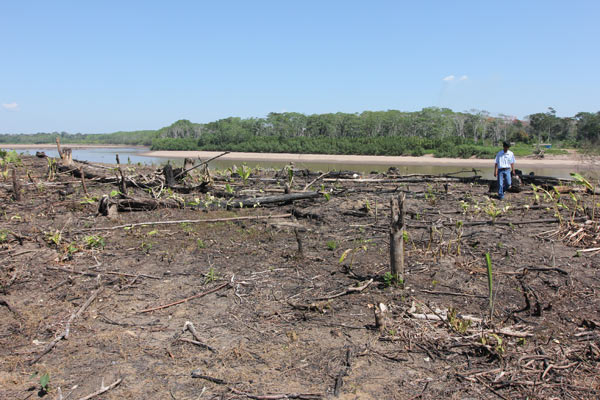 Farmers can plant crops in the Tambopata Reserve buffer zone, but some neighbors in the tourism corridor object to the clearing and burning of fields. Photo by Barbara Fraser.