The rainforests of South America face many threats. The deforestation occurring on the continent is among the highest in the world and results in losses of habitat, biodiversity and massive amounts of sequestered carbon. While the usual culprits such as farming, ranching and logging are well known, gold mining is fast extending its destructive reach into some of the world’s most untouched landscapes, according to research published this week in the journal Environmental Research Letters.

“Although the loss of forest due to mining is smaller in extent compared to deforestation caused by other land uses, such as agriculture or grazing areas, deforestation due to mining is occurring in some of the most biologically diverse regions in the tropics,” said Nora Álvarez-Berríos, a graduate student in environmental sciences at the University of Puerto Rico-Río Piedras, in a press release. She was the lead author of the study.

Huepetuhe goldmine in southern Peru. Mercury, a neurotoxin, is often used to separate ore from substrate. Previous studies have shown high blood levels of mercury in fish and people downstream in the city of Puerto Maldonado. Photo by Rhett A. Butler.

Álvarez-Berríos and her co-author, T. Mitchell Aide, found that between 2001 and 2013, about 1,680 square kilometers (650 square miles) of forest was destroyed in connection with gold mining on 1,600 individual mining sites across South America. The distribution of deforestation, however, was anything but even. The researchers found that more than 90 percent of the forest loss happened in four “hotspots,” including repositories for “some of the most remote and better-conserved old-growth forests in tropical South America,” write the authors in their paper.

What’s more, they connected the trend with the international economic downturn that occurred in 2008. As recessions sent in around the world, people increasingly turned to tangible investments like gold. That demand, combined with rising incomes in places like China and thus more money to spend on gold jewelry, drove the metal’s price per ounce skyward, from $250 in 2000 to more than $1,200 today. The price peaked at more than $1,800 an ounce in 2011.

Álvarez-Berríos and Aide split the time period roughly in half, looking at how the deforestation that occurred from 2001 to 2006 compared with that from 2007 to 2013. In the latter span, 1,303 square kilometers (500 square miles) lost tree cover due to mining. That’s more than 80 percent of the total deforestation that happened over the 13-year span, and a 245 percent increase of the clearing that happened before the global financial crisis.

To find the links between gold mining and deforestation, the scientists first compiled a database of known or potential mines from government and private company records, and by scanning Google Earth images. They then used satellite imagery to examine how the vegetation on and around these mining sites changed over time. Additionally, they also looked at whether the mining sites infringed upon protected areas such as parks and refuges.

The largest portion of deforestation – some 40 percent – occurred in the Guianan forest, found in the three Guianas – Guyana, French Guiana, and Suriname – and Venezuela. Mining has been on the rise in this region since the 1990s, as it’s rich in iron, diamonds, and bauxite, as well as gold. The authors cite a statistic from the Guyana Forestry Commission that 68 percent of deforestation in Guyana between 2001 and 2010 was the result of mining. The study also revealed the frequent incursion of mining into “areas of high conservation priority” and that most mines in the Guianan forest are small or mid-sized. 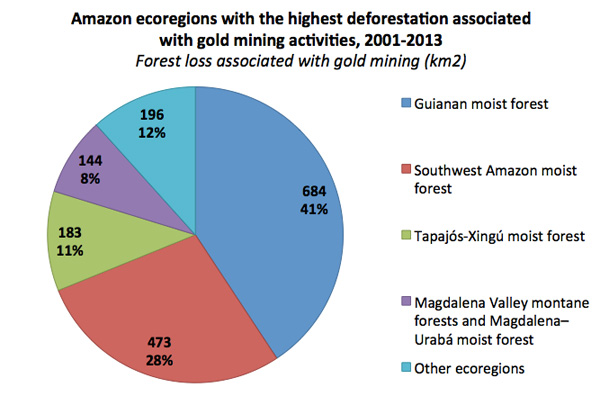 Brazil has seen a spike in mining as the price of gold has risen, with 10 times the number of small-scale miners in 2010 as in 1990. More than 200,000 are estimated to be operating in the Brazilian Amazon, especially in the Tapajós–Xingú ecoregion forest. The authors point out that grazing in the same areas as the mines often compounds deforestation.

Mining in the Magdalena Valley-Urabá region of Colombia has been a noteworthy driver of deforestation, along with oil exploration, ranching and farming, according to the authors. Nearly all of the mining in Colombia is illegal, they write, and this specific region is home to guerrilla and militia groups, including the FARC and the ELN, that use mining to support their activities.

The fourth deforestation hotspot mentioned by the authors is in southwest Peru, in the Department of Madre de Dios. They cite previous research that found that mining was the greatest force for change in the landscape between 2008 and 2012, even though before that agriculture had caused the majority of deforestation. Álvarez-Berríos and Aide point out that the jump in the price of gold has meant that miners have the potential to make more than 12 times more than the average farm laborer in the region – up to $230 a day as a miner, compared to $15 to 18 a day to work on a farm.

Data from Global Forest Watch illustrates the deforestation occurring in the region. FORMA alerts show instances of likely forest loss in near-real time. Since 2006, the majority of alerts have occurred along waterways, suggesting deforestation may be happening alongside attempts to mine the alluvial gold found in rivers and streams. 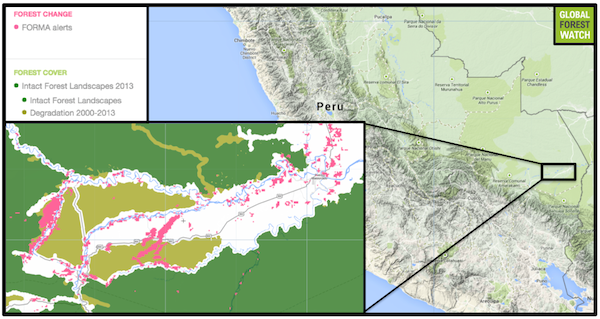 Mining is rampant along the upper reaches of the Madre de Dios River in southern Peru. According to Global Forest Watch, there have been more than 3,000 FORMA alerts in the region shown since 2006, with more than 57,000 hectares of tree cover lost from 2001 through 2012. Click to enlarge.

As the incentives to mine gold persist, the authors note that deforestation is not the only negative result. Mining increases sedimentation in rivers, bush meat hunting, and noise pollution, write the researchers. And the chemicals used in the process can affect populations far from the mining sites themselves: “Elevated mercury concentrations have been found in humans hundreds of kilometers away from gold mining centers,” they add.

In the paper, the scientists call for the need to tackle both the supply and demand sides of the issue. “To decrease the amount of deforestation that is occurring as a result of gold mining in the tropical forests, it is important that awareness is raised among gold consumers to understand the environmental and social impacts of buying gold jewelry or investing in gold,” said Álvarez-Berríos in the release.

She added, “It is important to also encourage more responsible ways of extracting gold by helping miners to extract in a more efficient way to reduce deeper encroachment into the forests.”