by Nicholas Weiler on 8 December 2014

It all went to hell when Jane Goodall started handing out bananas. Within a few years, the previously peaceful chimpanzees she was studying split into two warring tribes. Gangs of males from the larger faction systematically slaughtered their former tribemates. All over the bananas. Or so the argument goes.

The idea that feeding the chimps had triggered the killings surfaced as soon as Goodall published her observations from Tanzania’s Gombe National Park in 1979. However, in the following decades, other researchers reported similar killings among chimpanzees hardly touched by human contact. Even so, the debate has persisted. Is tribal violence a normal part of chimpanzee behavior or an unnatural consequence of human interference?

A new analysis of five decades of chimpanzee research, published in the journal Nature, supports the idea that chimpanzees kill members of other tribes for their own ecological reasons and not because of human influence.

The international team of authors—hailing from 18 chimpanzee research sites—pooled hundreds of combined years of observations to create a comprehensive database of known or suspected chimpanzee killings. The 30 researchers, led by anthropologist Michael Wilson of the University of Minnesota, found that measures of human impact, such as habitat disturbance and the history of feeding by researchers, had no bearing on how many killings occurred at a given research site. Instead, killings were more common in chimpanzee groups with more males and higher population densities, ecological factors that connect tribal violence to competition over resources.

Chimpanzees are highly territorial. When groups of chimpanzees meet, “it’s pretty much always hostile,” Wilson told mongabay.com. Usually they just holler and posture, he said. But if a large group of males encounters a lone chimpanzee from another community, it can get ugly. They will chase the loner down, pin him, and beat him viciously.

The new paper is a “pretty conclusive” rebuttal to advocates of the human impacts hypothesis, said primatologist Frans de Waal of Yerkes National Primate Research Center at Emory University in Atlanta, who was not involved in the study. 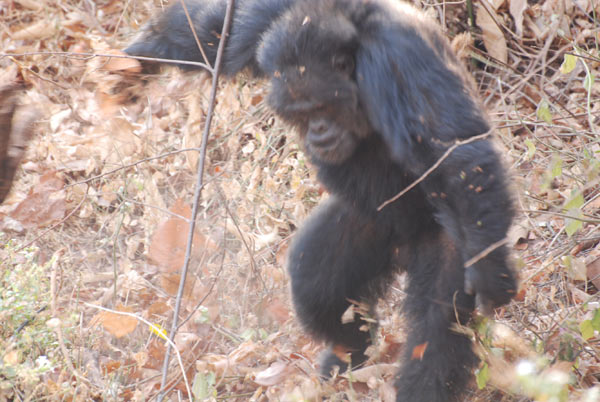 Ferdinand, alpha male of the Kasekela community, stands bipedally in the midst of a charge display. Credit: Ian Gilby.

“They have lost the argument,” de Waal wrote in an email to mongabay.com. “But don’t expect any admission after half a century of battle.”

Indeed, anthropologist Brian Ferguson of Rutgers University has publicly disputed the team’s conclusions. Ferguson, who is writing a book exploring the origins of chimpanzee violence, fundamentally disagrees with the new study’s approach, he told mongabay.com. Applying the same simple measures of impact across very different chimpanzee communities doesn’t capture the sometimes subtle history of human influence, he said, noting that “you have to look at things in their detailed, local specifics.”

This debate is incendiary, in part, because it is not just about chimpanzees, said de Waal. It is also about us. 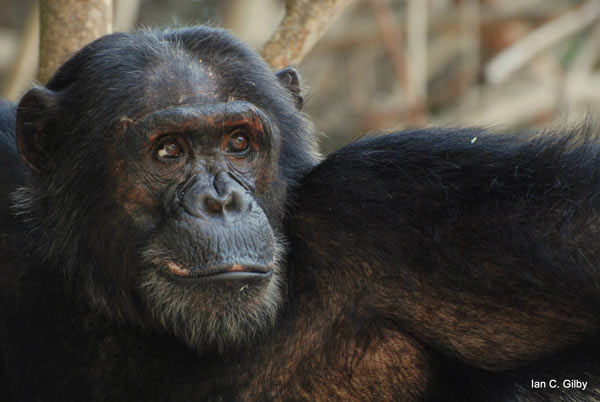 Ferguson and others, such as Robert Sussman of the Washington University in St. Louis, argue that human warfare is a relatively recent cultural invention. The earliest archeological evidence of war crops up at different times for different cultures, Ferguson said. But to date traces of warfare are completely absent before the agricultural revolution of around 12,000 years ago.

On the other hand, Richard Wrangham of Harvard University, the senior author of the new paper, has long argued that chimpanzee violence suggests a biological drive to war deeply rooted in millions of years of human evolution. Chimpanzees are among humanity’s closest relatives. If they are wired to fight and kill one another, perhaps war is our destiny, too.

But a second facet of the new study presents a more hopeful picture, de Waal wrote. The authors also examined violence among bonobos, close cousins of the chimpanzee. In 92 combined years of observations, they reported only one suspected killing. 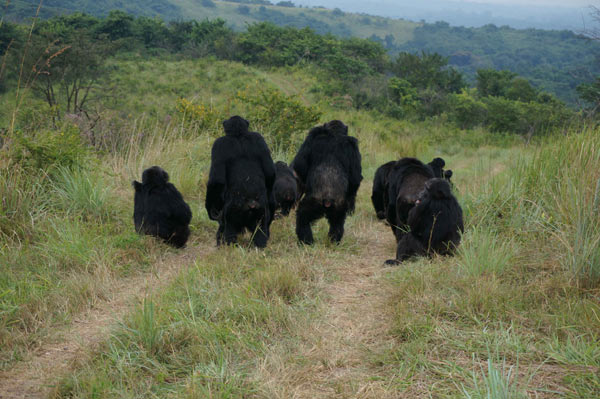 The bonobo mingles peacefully across territorial borders, de Waal said. “Humans, too, are most of the time, in most locations, peaceful, marry their neighbors, have parties with them, exchange goods, let them travel across to the river, etc.” he wrote.

The new research is solid evidence that chimpanzees are violent by nature, de Waal wrote. But the peaceful bonobo is just as closely related to us as the warlike chimpanzee. So far it’s not clear which cousin humanity takes after.

Nicholas Weiler is a graduate student in the Science Communication Program at the University of California, Santa Cruz.

New calendar celebrates primates and raises money for their survival

(11/26/2014) Humans, or Homo sapiens sapiens, are really just upright apes with big brains. We may have traded actual jungles for gleaming concrete and steel ones, but we are still primates, merely one member of an order consisting of sixteen families. We may have removed ourselves from our wilder beginnings, but our extant relatives—the world’s wonderful primates—serve as a gentle living reminder of those days.

(10/31/2014) Brazil has reserved about 17.6 percent of its land (1.5 million square kilometers) to receive protection from unauthorized exploitation of resources. However, despite significant expansions in protected areas since the mid-2000s, the formation of Protected Areas has stagnated in the country since 2009, and many have had their protections completely revoked.

When cute turns deadly – the story of a wildlife biologist who was bit by a venomous slow loris, and lived to tell the tale

(10/24/2014) Slow lorises are YouTube stars. A quick search on the website will greet you with several videos of these endearing little primates–from a slow loris nibbling on rice cakes and bananas, to a loris holding a tiny umbrella. Lady Gaga, too, tried to feature a slow loris in one of her music videos. But the loris nipped her hard, and she dropped her plans. This was probably for the best, because the bite of a slow loris is no joke. Being the only known venomous primate in the world, its bite can quickly turn deadly.