Scientists reintroduce agoutis in rainforest in city of 12 million 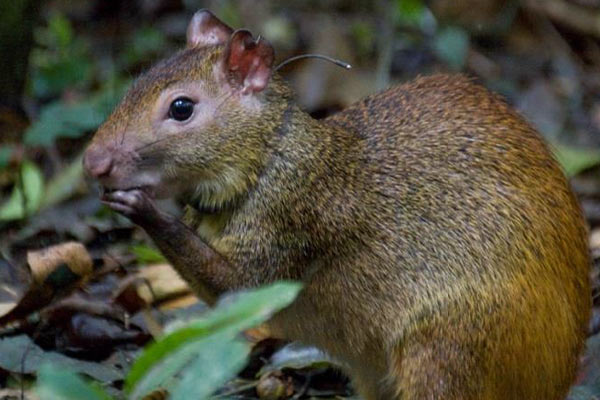 One of the female reintroduced agoutis with a radio collar. Photo by: Rui Salaverry.

When one thinks of Rio de Janeiro, one usually doesn’t think: rainforest. However, in the heart of the city sits a massive rainforest sprung over long-gone sugar and coffee plantations. The forest—protected today as the Tijuca National Park—is home to hundreds of threatened species, but no agoutis, a common ground mammal in Latin America. That changed when a group of conservationists reintroduced 21 red-humped agoutis (Dasyprocta leporina) into the park, an endeavor that is described in a new paper in mongabay.com’s open-access journal Tropical Conservation Science.

“Agoutis had not been seen in the area for at least two decades prior to the start of our project in 2010, leading to the assumption that they were locally extinct,” the authors write. “The probable causes of extinction were hunting and intense habitat loss and fragmentation from the sixteenth to the nineteenth century due to replacement of forest by sugarcane, coffee plantations, and pastureland.”

But when considering reintroducing species to a forest, why pick agoutis? Easy: these medium-sized, ground rodents play an outsized role in the forest by hoarding seeds and nuts much like squirrels. When a nut is forgotten, it might become a new tree, eventually invigorating the forest.

“Agoutis are among the most important large-seed dispersers,” explain the researchers. “These scatter-hoarding rodents hide seeds in widely spaced caches in the soil surface as food reserves to be retrieved and eaten later.The reintroduction of [red-humped agoutis] is therefore an important tool for restoring animal-plant interactions in Brazilian Atlantic Forest areas where these animals are absent.” 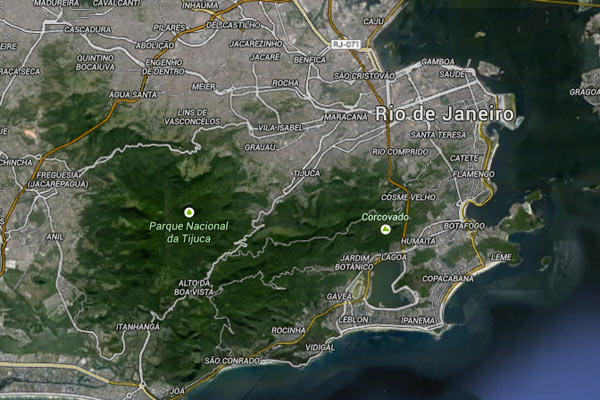 While animal reintroductions are notoriously difficult and usually end in failure, the researchers cite at least the short term success of their adventure.

The agoutis in questions came from a semi-wild state, dwelling in city park in Rio de Janeiro where they were fed daily. The researchers trapped the agoutis and then quarantined them for a time in the local zoo. When the animals were found to be free of diseases they were brought to a small pen in Tijuca National Park to have time to acclimatize themselves to their new, much bigger, ecosystem. During this process, ten animals perished, mostly due to fighting amongst themselves but also to stray dogs that broke into the acclimatization pen in Tijuca National Park.

“For future agouti reintroduction programs, we recommend a shorter quarantine than the period we used,” the researchers write. “Also, the agoutis should be separated into smaller groups of no more than five individuals (ideally with a single male per group) in each enclosure. With these precautions, the stress and fighting can be minimized during the quarantine, reducing the mortality in this stage.”

Still, the researchers not that the acclimatization period shouldn’t be shorter, since it’s important for the agoutis to gain back any weight they lost before full release into the wild.

After several months, the eleven survivors were released—complete with tracking tags—into their new home. For thirty days, scientists left food out at the pen and then finally all contact—except the tracking tags—ceased. Five months, after their release, two more agoutis were dead, but the final nine are believed to alive. More importantly, though, was confirmation that this pioneer population was breeding.

“Altogether, 10 cubs were observed with four reintroduced female agoutis in five reproductive events during the study period, providing evidence of successful reproduction in the reintroduced population,” the authors write.

Research on other reintroduction efforts have found that the first population often suffer high mortality rates, yet the next generation—those born into the new environment—often fare better.

By tracking the agoutis, the researchers were also able to spy on what seeds and nuts they ate and hoarded, including locally-threatened species and trees with large nuts that require animal dispersal.

“Contrary to what was thought, it was shown that the agoutis can and do disperse large seeds to great distances,” the researchers write. “Moreover, these rodents carry seeds towards locations with lower conspecific [i.e of the same species] tree densities. These characteristics combined make the seed dispersal by agoutis highly effective, enhancing the chances of a given seed to become a seedling.”

The Atlantic Forest, also known as the Mata Atlântica, is one of the most imperiled biomes on the planet. Once stretching along the bulk of the Brazilian coastline–including parts of Paraguay, Uruguay, and Argentina–the forest now covers less than seven percent of its historical and range. And the vast bulk of what survives are just small, disconnected patches of forests–like Tijuca National Park–that have lost many of their key species.

The authors conclude that “the short-term success of the reintroduction and the interactions of the agoutis with the large-seeded trees show that this conservation tool has much potential to restore seed dispersal in Neotropical forests such as the Brazilian Atlantic Forest.” 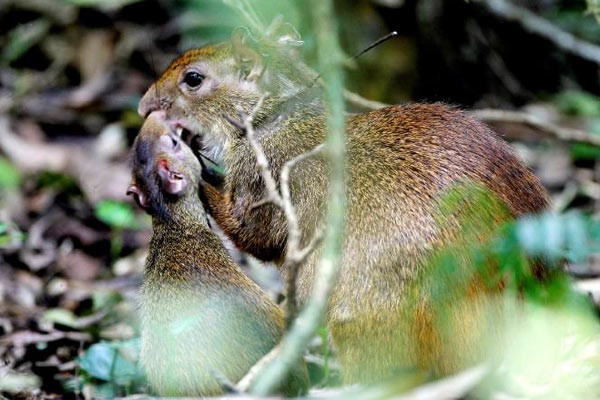 (11/04/2014) Over 70 years since the last gray wolf was killed in Grand Canyon National Park, the top predator may be back. Tourists have reported numerous sightings—and taken photos—of a wolf-like animal roaming federal forest land just north of the park. Agents with the U.S. Fish and Wildlife Service now intend to capture the animal to determine if it is indeed a wolf or perhaps a wolf-dog hybrid.

(01/06/2014) Local extinctions have occurred across a variety of habitats on every continent, affecting a gamut of species from large predators such as the wolves of North America, to tiny amphibians like the Kihansi spray toad of Tanzania. The long trek toward reversing such extinctions has begun, but it is not without its challenges, both ethical and logistical.

(12/02/2013) The northern bald ibis (Geronticus eremita), also called the hermit ibis or waldrapp, is a migratory bird. Once, the bald ibis lived in the Middle East, northern Africa and southern and central Europe, but due to hunting, loss of habitat and pesticide-use, the birds disappeared from most of these areas and is currently considered Critically Endangered. It became extinct in Europe 300 years ago; the bird is almost gone in Syria, with only a single individual recorded at the country’s lone breeding site in 2013; and the only stronghold left is a small population of around 500 birds in Morocco. But now, a team of scientists from Austria is working to reestablish a self-sustaining, migratory population of bald ibis in Europe.