by Shreya Dasgupta on 9 December 2014

In October this year, CAMAC Energy, an oil and gas exploration and production company, announced that they would conduct seismic surveys for oil and gas within Arabuko-Sokoke Forest, one of the last remaining fragments of coastal forests in East Africa. This bit of news created uproar. Conservationists and community groups got together, sent letters of protest to the Kenyan government, and started online petitions. Following immense pressure from the environmental front, CAMAC Energy, on 21 November, sent out a letter to various stakeholders announcing that they had cancelled their plans to conduct surveys inside the forest.

“This is a great step by CAMAC Energy,” Raphael Magambo, the National Director of A Rocha, a conservation NGO that was one of the protestors, told mongabay.com. “It is good that they were able to listen to communities and conservation organizations.” 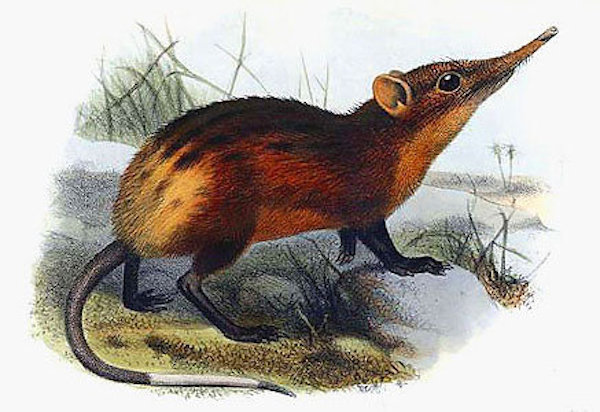 The golden-rumped shrew (Rhynchocyon chrysopygus) is listed by the IUCN as Endangered, and may now only exist in Arabuko-Sokoke Forest as other coastal forests have been degraded.

Magambo, however, is miffed with the Kenyan government and other agencies responsible for protection of habitats and wildlife in the country.

“It is a huge shock that these agencies still cannot see the value of conservation sites like Arabuko-Sokoke Forest. Not only does the forest have value in maintaining rare biodiversity, it also has value in what communities gain from the forest today and will be gaining in future,” he said. “Maintaining Arabuko-Sokoke Forest as a conservation site makes economic sense!”

So what makes the Arabuko-Sokoke Forest special?

Arabuko-Sokoke lies between the towns of Kilifi and Malindi in Kenya, and is an Important Bird and Biodiversity Area, according to BirdLife International. It is also a part of the Eastern Arc Mountains and Coastal Forests biodiversity hotspot. The forest is home to more than 230 species of birds, including rare species like the Clarke’s weaver bird, Sokoke scops owl, Pemba sunbird, Fischer’s tauraco, and the Tana River cisticola. 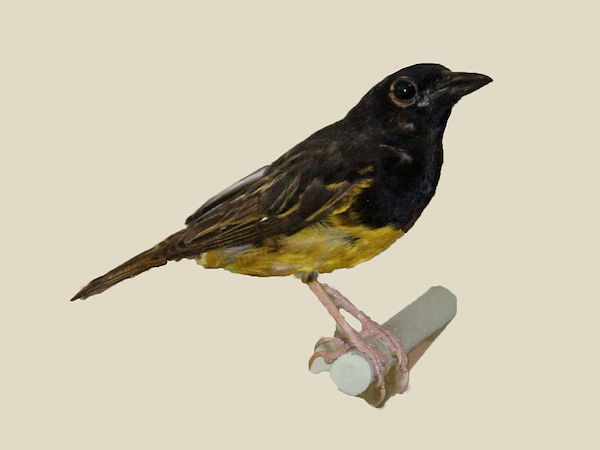 Clarke’s weaver bird (Ploceus golandi) is listed by the IUCN as Endangered, with most records occurring form within Arabuko-Sokoke forest. Photo by Dick Daniels.

Numerous threatened mammals occur within Arabuko-Sokoke, such as the African elephant, golden-rumped elephant shrew, Ader’s duiker, Sokoke bushy-tailed Mongoose and the African golden cat. The forest also has more than 200 known species of butterflies. In fact, the Kipepeo Butterfly Project, set up in 1993, is a successful butterfly farming project for farmers living around Arabuko-Sokoke that provides them with an alternate source of income.

Like many other conserved forests in Kenya, Arabuko-Sokoke has been facing pressure due to unsustainable exploitation by communities, Magambo said.

But past investments in capacity building and livelihoods have reduced illegal activities inside the forest by 40 percent, and some sections of the forest by over 80 percent, Paul Matiku, Executive Director of Nature Kenya, told mongabay.com.

Between 2001 and 2012, Arabuko-Sokoke lost only about 200 hectares of tree cover according to Global Forest Watch. However, the area adjacent to the forest appears to have suffered considerable tree cover loss of about 3,000 hectares within the same time span. So it was not surprising when CAMAC Energy’s announcement jolted conservationists. 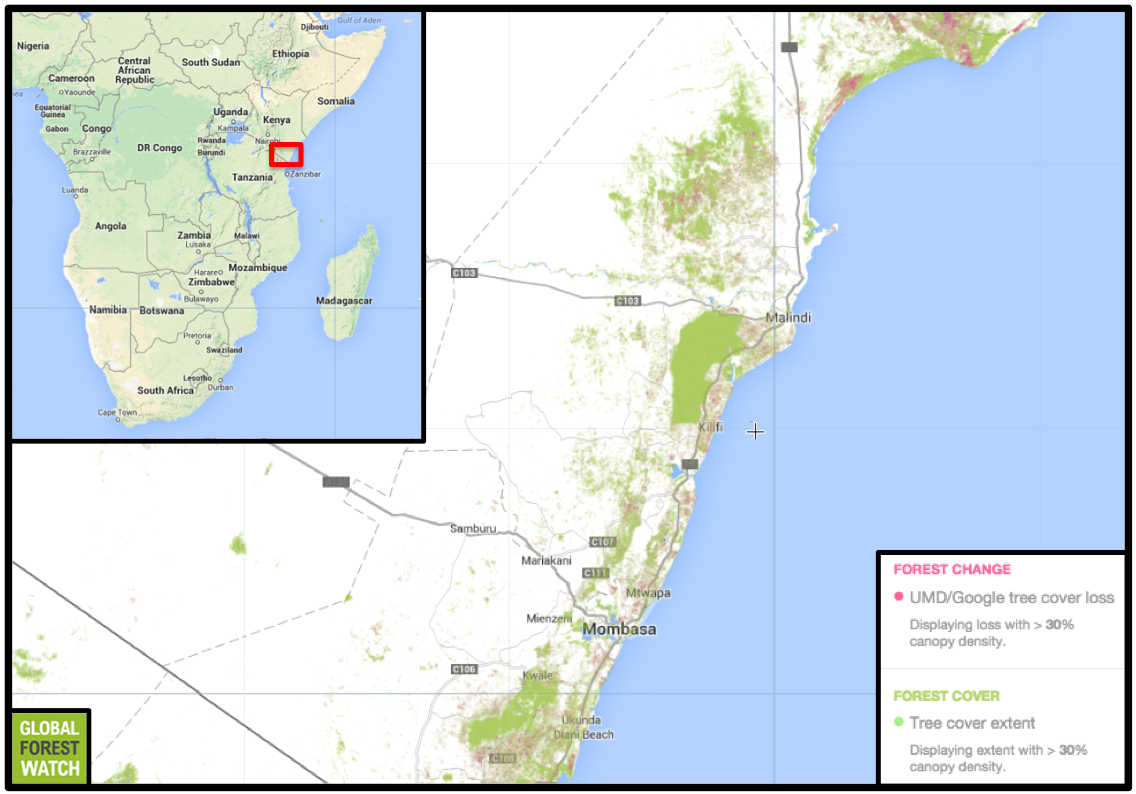 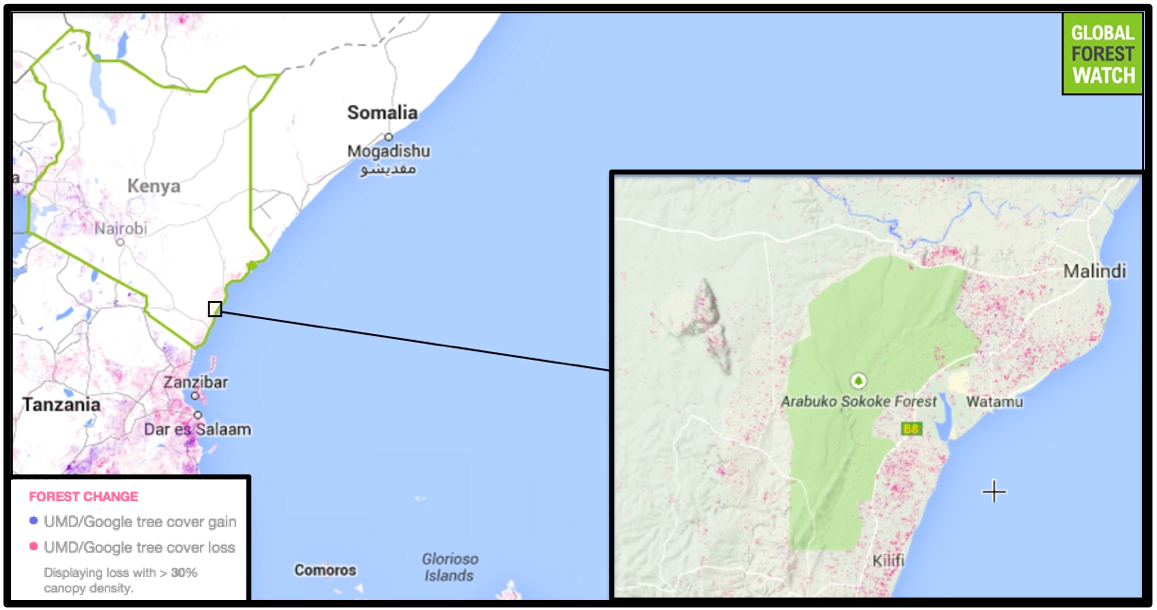 According to Global Forest Watch, Arabuko-Sokoke lost 200 hectares of dense tree cover from 2001 through 2012, which pales in comparison to the forest loss outside of its boundaries. Map courtesy of Global Forest Watch.
Click to enlarge.

Arabuko-Sokoke falls within Oil Block L16 allocated to CAMAC Energy by the Kenyan Government, and covers about 900,000 acres.

“The forest is located in the middle of the block and remote sensing shows that the area covered by the forest overlies a structure that is favorable for the accumulation of hydrocarbons,” Augustin Nkuba, Managing Director of CAMAC Energy Kenya Ltd., told mongabay.com.

The initial seismic surveys, as planned by CAMAC Energy, would be conducted on two short lines or transects within Arabuko-Sokoke, which would help define structures and identify areas with potential for oil or gas. On each of these lines they would drill small holes, six to ten meters deep, every kilometer, in which they would then detonate explosives and measure the signal, he told the Star in an interview.

These surveys would have been done in an environmentally and socially responsible manner, Nkuba told mongabay.com.

“We had comprehensive plans to use existing roads and trails everywhere possible. In fact, one of the two lines would have been entirely acquired over an existing road,” Nkuba said. “In areas where there were no existing roads or trails the crew would go through the forest on foot and lay-out the receiving cables by hand. Further, the entire process was going to be conducted under the watch of Kenya Forest Service to ensure compliance.”

According to Nkuba, an Environmental and Social Impact Study (ESIA) was conducted by a local company called EarthView Geoconsultants Ltd in 2013-2014 to assess the impact of their seismic surveys on both the environment and surrounding communities.

“The report for Block L16 is in-depth and over 496 pages long,” Nkuba said. “It covers topics ranging from biodiversity to the impact of air and noise emissions…It was thoroughly reviewed and approved by the National Environment Management Authority; and a license to acquire seismic was issued to CAMAC in May 2014. To suggest that there is anything improper is unfounded and insulting to both CAMAC and Earthview.”

Conservationists, however, claim that the ESIA was not done properly. For instance, according to Matiku, no one from the mandated government agencies or local conservation organizations remember any public consultation, a requirement under the Environmental Management and Coordination Act.

Magambo, too, agreed. “I will not confirm or disapprove that an EIA was done,” he said. “Reason being that I haven’t seen a copy of the document. I haven’t gotten a single actor who says that they got the complete EIA documents.”

But under the ESIA approved by the National Environment Management Authority, CAMAC would have to get access permits from mandated agencies before undertaking their Seismic surveys in areas under their jurisdiction, Matiku said. “This has been very helpful since the Kenya Forest Service did not issue permit[s] for CAMAC to access Arabuko-Sokoke Forest.”

Pressure from the community finally forced CAMAC Energy to cancel its seismic surveying plans. As part of their protests, organizations sent petitions to the Kilifi County Government, letters to the Kenya Government ministries including Energy and Petroleum, Environment and Wildlife and Forests, as well as CAMAC offices in Kenya and Texas in the U.S. The organizations also started an online petition.

“Although [the online petition] was alive for less than 48 hours, over 600 petitioners signed it,” Matiku said.

Canceling the seismic lines through Arabuko-Sokoke is a setback to getting a good spatial distribution of seismic data, Nkuba said. “However, we are compensating by adjusting our seismic programme in other areas and acquiring additional lines outside of the Forest.”

Matiku said CAMAC has set a good example in Arabuko-Sokoke, one that other oil and gas companies should follow. “However, there are many ecologically sensitive sites inside CAMAC’s Block L16 in Kilifi County,” he said.

Several seismic lines outside the forest pass through community farms too, Magambo pointed out. “We do urge them to respect the rights of these communities even as they negotiate their appropriate compensation for this exercise.”

(12/03/2014) Lush mountains speckle East Africa’s grasslands and desert, from Mozambique to Ethiopia. These isolated habitats are home to a plethora of species, and are considered by scientists to be some of the most biodiverse regions in the world. However, their forests are being cut down for farmland and are threatened by global warming, putting at risk multitudes of species that have nowhere else to go.

(11/11/2014) Four years after over a quarter of a million people perished in a famine in Somalia, the East African country is again on the verge of a possible humanitarian disaster. Flooding in southern Somalia, following months of little rain, has just exacerbated an already-precarious situation according to the Food and Agricultural Organization (FAO).

(11/06/2014) Corruption in Tanzania is enabling large volumes of illegal elephant ivory to be smuggled out of the country, alleges a new report from the Environmental Investigation Agency (EIA).