Reefs reduce 97 percent of wave energy, could be better than artificial barriers 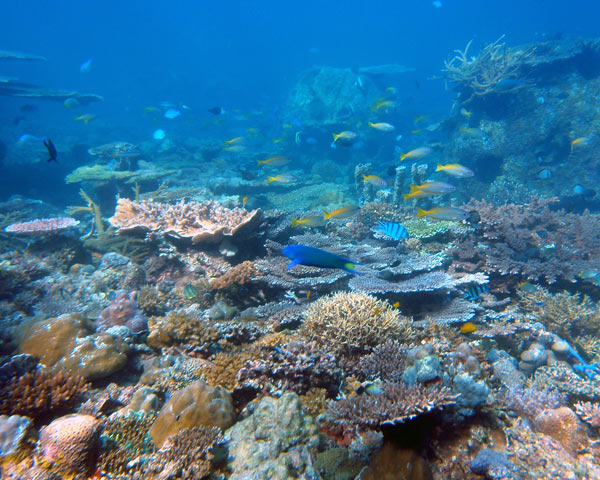 Many species, not just human beings, depend on coral reefs for sustenance and protection. Photo credit: Curt Storlazzi.

We have a lot of stake in the coast. Coastal waters are where we host fisheries, build homes and turn to for tourism and recreation. So how should coastal communities, which comprise nearly 40 percent of the world’s population, safeguard against flooding, erosion and violent weather? Marine scientist Michael Beck suggests the solution is growing right beneath some waves and, in many cases, it has been waiting there for thousands of years.

Beck, who leads the coastal defense research group of Science for Nature and People and the Nature Conservancy’s Global Marine Team, coauthored a study with lead author Filippo Ferrario of the University of Bologna, Italy, and several other scientists, in which they assessed coral reefs’ ability to reduce ocean wave energy. They discovered that, on average, coral reefs can reduce wave energy by 97 percent. Their study holds broad implications for the 200 million people who live within 31 miles of coral reefs.

“We knew that reefs break waves and reduce their energy,” said Beck, who was surprised by the findings. “We were not expecting to see a 97 percent reduction, though. But it really is that consistent and that strong across all the data.” The team of scientists analyzed more than 255 studies on coral reefs and the buffering effect they have on waves that pass through them. When reefs break waves, they found, the process begins at the reef crest. 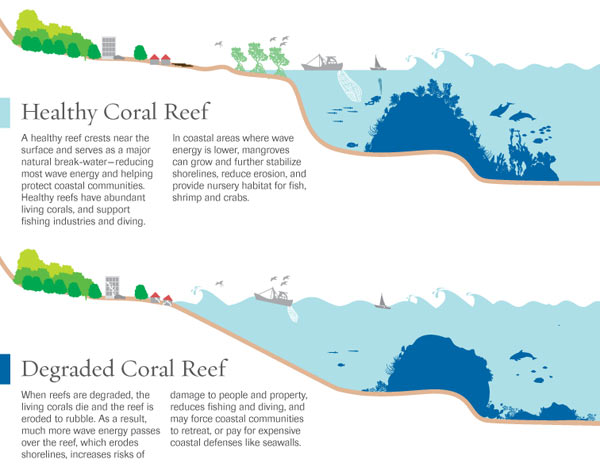 Coral reefs are composed of two parts: the crest and the flat. The crest is the tallest part of the reef, and it sees the most wave action. The study found that the majority (86 percent) of wave energy is reduced at the reef crest alone. The rest of the work is handled by the sprawling, broad flat, the part of the reef you sometimes see at low tide. After the crest, the first 150 meters (500 feet) of the flat mitigates half of the wave’s remaining energy.

The reef’s ability to dampen waves also depends on two physical qualities: height and roughness. Taller crests can handle taller waves, and coral species with rough texture can reduce wave energy more than ones with smooth texture. With the reef’s important qualities identified and their wave-reducing abilities properly measured, coastal engineers can begin looking at reefs as honest defenses against natural hazards, and even compare them with artificial structures.

The study found that coral reefs reduced wave height by 51 to 74 percent, while artificial structures like breakwaters reduced wave height by 30 to 70 percent. The study also estimated that reefs cost less than artificial structures. The authors compared the price of coral restoration projects with the price of building breakwaters and found that the latter, on average, costs 15 times more than restoration projects.

However, coral reefs around the world are threatened by ocean acidification, global warming, and other human-caused phenomena. As more CO2 enters the atmosphere, it’s absorbed by the ocean, which makes the water more acidic and dissolves the calcium carbonate corals use to build their structures. Rising ocean temperatures can kill the symbiotic algae corals depend on to photosynthesize and make food, which may lead to “coral bleaching.” Their ability to photosynthesize is also dependent on water depth. If sea levels rise faster than corals can grow, they run the risk of getting lost in the depths where it’s too dark for them to produce energy. Coal mining and overfishing are also taking a toll on coral reefs around the world.

So, can coral reefs be considered affective barriers in the long term if they’re dissolving from acidification and sinking in rising seas? Beck addressed this concern by claiming that artificial structures have their own weaknesses.

“We have the same concerns about hard infrastructure as well,” he said. “A little bit of sea level rise has huge effects on our sea walls and breakwaters, making them less viable. Let’s look at this all on fair footing.”

Beck also suggested that reefs are more resilient than many believe. “We do have grave concerns for reef health in the future,” he said, “but we aren’t nearly as doom and gloom as you might read.” Many of the reefs that were damaged during the major El Niño bleaching event of 1998, for example, have since recovered.

Before engineers and governments can begin seriously investing in coral restoration as a coastal defense, they will need to understand which reefs bestow the greatest impact, and thus which reefs warrant the most attention. Scientists like Beck are working now to uncover that information, and may soon provide policy makers with greater reason to consider coral reefs as a feasible defense to natural hazards.

Nearly 200 million people live within 31 miles of a reef; their homes and much of their livelihood depends on the health of coral reefs. Photo credit: The Nature Conservancy Click to enlarge.

Elephants under the sea: awkward-looking fish modify the coral-reef ecosystem in mixed ways

(08/06/2014) Bumphead parrotfish are noisy feeders. They break off large branches of corals using their powerful beaks, grind them up in their bodies to extract nutrients, and expel the undigested material in large cloudy plumes of feces. Their voracious feeding is, however, not just a loud, messy affair. During the course of their feeding, they also change the coral reef ecosystem in numerous ways.