Although only a nuisance in your home, on an isolated island chain (archipelago) off the northeastern coast of Brazil, rats pose a threat to the red-billed tropicbird (Phaethon aethereus). The seabird nests in the remote Abrolhos National Park, but two species of invasive rats prey on its eggs and young: the house rat (Rattus rattus) and the brown rat (Rattus norvegicus).

Colonial seabirds, i.e. seabirds that live in high-density colonies, are of particular importance to conservation because many of their characteristics are risk factors for extinction. This is especially true of the red-billed tropicbird. This bird’s breeding is restricted to several sites across the tropics and reaches reproductive age late. Brazilian researchers recently conducted a population viability analyses (PVAs) on the southernmost breeding colony of red-billed tropicbirds located in Abrolhos National Park and published their results in mongabay.com’s open-access Tropical Conservation Science. 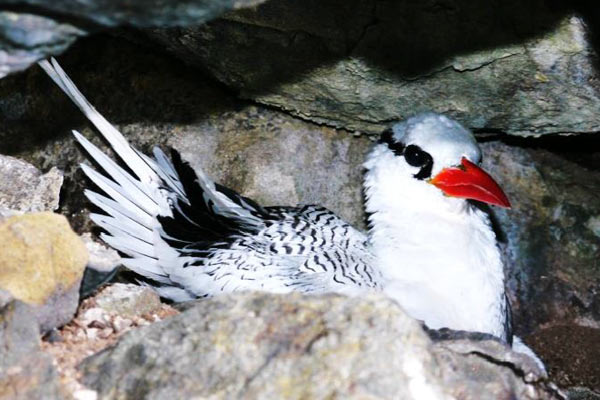 Nest site of a red-billed tropicbird (Phaethon aethereus) in the Abrolhos archipelago. Photo by: Cesar Musso.

This particular colony is significant because of its isolation. Potentially, this remote population of tropicbird is morphologically, genetically, or ecologically different from other colonies.

“This [colony] represents the southernmost population in the western Atlantic, and is one of the most southerly sub-populations in its entire distribution,” the researchers write. Thus, they regard this colony as especially important targets for conservation.

The researchers determined that the future of this breeding colony is uncertain. Currently, the predation pressure from rats is so great that this population faces extinction in as little as 75 years. Given this, the researchers suggest two means of safe guarding the red-billed tropic bird from rats: control and eradication.

The researchers found that cutting down the rat population by 40 percent would likely be enough to keep the red-billed tropicbird from extinction. But human factors, such as poor waste management, can prevent adequately controlling the rat population. According to the researchers, the best route to follow is eradication. 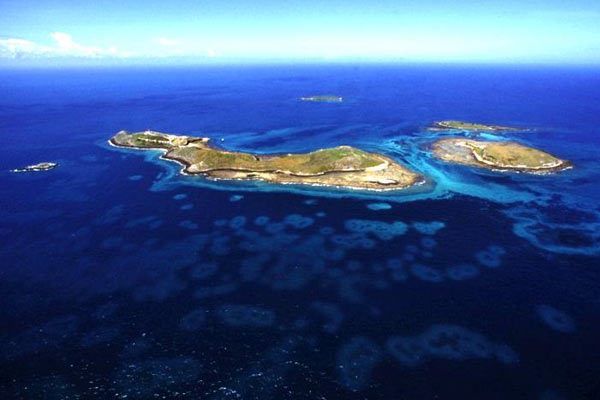 Complete view of the five small islands of the Abrolhos archipelago. Photo by: Marcello Lourenço,

However, eradication comes with its own difficulties. The researchers say complete eradication is not necessarily probable and the method is expensive. Financially such an undertaking would require a great deal of political willpower. Additionally, continued success requires a long term program of quarantine procedures to ensure the Abrolhos National Park isn’t invaded by rats again.

Despite such potential difficulties, the researchers note that the size of the island chain, its small human population and discreet tourism practices all favor an eradication strategy.

“We strongly recommend the development and implementation of a management program to completely eradicate rats from Abrolhos National Park,” the researchers write. “Although such a program should be implemented as quickly as possible, it will be necessary to perform further research to identify optimal strategies for eradificaton.”