Pollinators puzzle to find flowers amidst natural and human fumes

The study, published in Science, measured how hawk moths (Manduca sexta) pick out the sacred datura flower scent (Datura wrightii) amidst all the other smells that waft through the environment. Datura’s brilliant 15-centimeter trumpets leap from dark, heart-shaped leaves, sending smelly signals into the arid sky of the southwestern deserts where they grow.

“When you look at these flowers, they’re wonderful—almost like sensory billboards or advertisements,” said neurobiologist and lead author Jeffrey Riffell from the University of Washington in an interview with mongabay.com.

The moths navigate over a sea of brush, following the datura aromas among flower patches separated by kilometers. The task is difficult. The blossoming bugles grow in dense stands of creosote (Larrea tridentata), flowers with the Mexican nickname hediondilla, or “the little stinker.” The stinker’s smell can overwhelm the moth, masking the datura scent.

The researchers spent the sweltering summer in Arizona’s desert in a mobile laboratory within a shipping container, sampling the environment’s volatile recipe. The team is the first to use a mass spectrometer to measure plant aromatics; the instrument usually measures atmospheric chemistry.

“These chemicals are messages. They are signals moving back and forth,” environmental chemist and co-author Leif Abrell from the University of Arizona told mongabay.com. “We took the portable mass spectrometer out into the natural environment in the desert, where the moth would normally experience its life—finding flowers, finding mates, looking for food, looking for places to lay its eggs.” 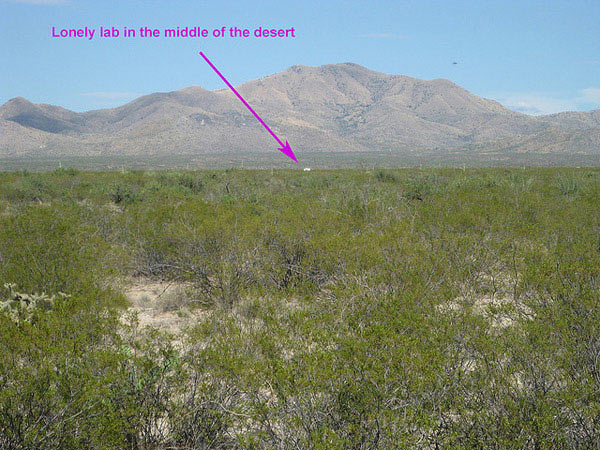 Researchers used a portable laboratory in this shipping container in the Arizona desert to test the aromatic composition of the natural environment where hawk moths find their preferred datura flowers amidst other odors. Photo by Leif Abrell.

Once the scientists decoded the smells, they recreated the complex wafting of datura’s scent in a wind tunnel in the lab, where artificial “breezes” made the pungent plumes curl and diffuse as they do in the desert. The moths flew freely amidst the flower scent for three minutes while the scientists noted each flutter, hover, and final sip of nectar. Then they recorded how increasing the datura scent’s frequency and adding background scents affected the moths’ ability to find the flower. Scientists used creosote, the background odor present in the desert environment, and exhaust fumes—similar in chemical composition to the natural odors from creosote and datura.

The study also measured how the background odors affected the moth’s ability to recognize the flower’s scent. Moths smell with the lobes at the bases of their antennae. Different chemical odors stimulate neurons; each scent fires up a special pattern that Riffell measured by inserting an electrode into the antennae lobe. For both the moth’s behavior and its brain patterns, the background odors significantly compromised its ability to recognize and find the desert flower. 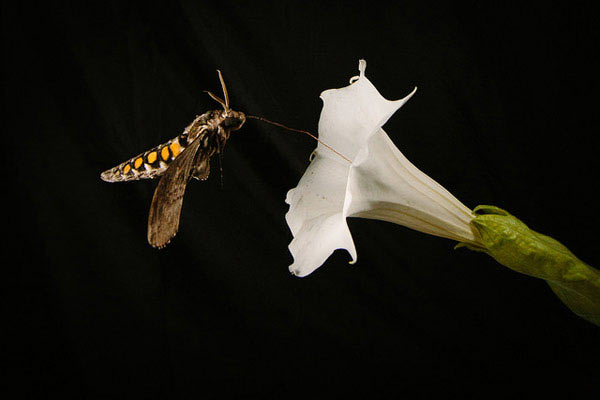 The hawk moth sips nectar from the Sacred Datura. Photo by Kiley Riffell.

Although he found the experiment compelling, neurobiologist Paul Szyszka from the University of Konstanz in Germany cautions that the team should test the results in a natural environment. He argues that in nature, background odors are less consistent than in the wind tunnel and may not affect pollinators.

“Everybody who observes bees on a meadow [sees that] when they go to a flower, they go there straight. They are not irritated by other flowers, even though they all smell,” said Szyszka in an interview with mongabay.com.

Riffell notes that the next step is to go into the field to see whether their results hold up under more natural conditions and for other pollinators.

“We’re really interested in seeing if the same thing is occurring in bees going to crop plants, for instance, or more native pollinators, like bumblebees,” he said. “How does the chemical environment really impact these interactions for these native pollinators?”

Lisa Marie Potter is a graduate student at the Science Communication Program at the University of California, Santa Cruz.

(10/31/2014) Bumblebees exposed to pesticides suffered adverse effects to their foraging behavior, according to a new study co-authored by Nigel Raine and Richard Gill in the journal Functional Ecology. Bumblebees are essential insect pollinators that are vital to healthy crop yields and biodiversity, but their populations have been in decline.

(09/25/2014) Ants appear more resilient to forest degradation than termites. Scientists have long studied how birds, mammals, and amphibians respond to forest degradation, but what about the most abundant animals in the forest? Insects. A new study in Biodiversity and Conservation looks at how ants and termites reacted to forest changes in Malaysian Borneo.

(09/08/2014) Monarch butterflies were once a common sight throughout the North American heartland. But declines in milkweed – their caterpillars’ only source of food – have led to a 90 percent decline in monarch numbers. Now, the U.S. Fish and Wildlife Service is reviewing a petition that would grant the iconic species protection through the Endangered Species Act.