by Morgan Erickson-Davis on 3 December 2014

A recent study examines the evolution of viper species in East Africa, highlighting the region’s mountaintop forests as among the most biodiverse in the world and calling for their protection. 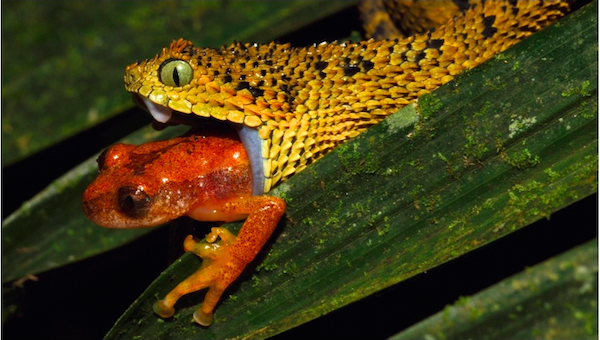 East Africa is famous for its dry savannahs, sparse woodlands, and its “Big Five” animals: elephants, buffalo, lions, leopards, and rhinos. Lesser known are its lush mountains that speckle the grasslands and desert from Mozambique to Ethiopia. These isolated habitats are home to a plethora of species, and are considered by scientists to be some of the most biodiverse regions in the world. However, their forests are being cut down for farmland and are threatened by global warming, putting at risk multitudes of species that have nowhere else to go.

East Africa’s climate is heavily influenced by the Great Rift Valley, a gigantic trench stretching 6,000 kilometers (3,700 miles) from western Asia down through eastern Africa. It started forming millions of years ago as the two major tectonic plates that comprise Africa started drifting away from one another, and continues to widen to this day, “rifting” at an average rate of an inch per year. In addition to creating a valley, this rifting process caused the uplifting of mountains along its sides, which dry out the air that passes over them from the east. The rift also created lake basins that are sensitive to “climate pulses,” sometimes filling with water and sometimes emptying in response to changes in Earth’s orbit. Over millions of years, the gradual shift of East Africa from rainforest to dry savannah punctuated with climatic hiccups influenced the evolution of many species, including our own. 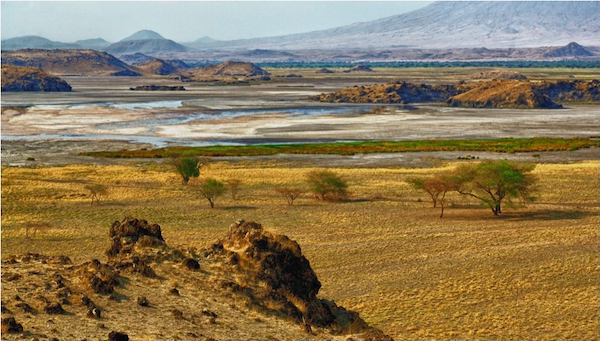 During the climatic upheavals of East Africa, its mountaintop forests remained relatively stable and moist, acting as oases for many species. Today, they are hotbeds of biodiversity. For instance, the Eastern Arc Mountains, which span eastern Tanzania and extend a bit up into Kenya, have some of the highest concentrations of endemic plants and animals in the world. To study how climatic and geologic processes influence the evolution of animal life, researchers from around the world focused on the Atheris genus of vipers, a group comprised of 15 species in East Africa, many of which are endemic. Their study was recently published in the journal Molecular Phytogenetics and Evolution. 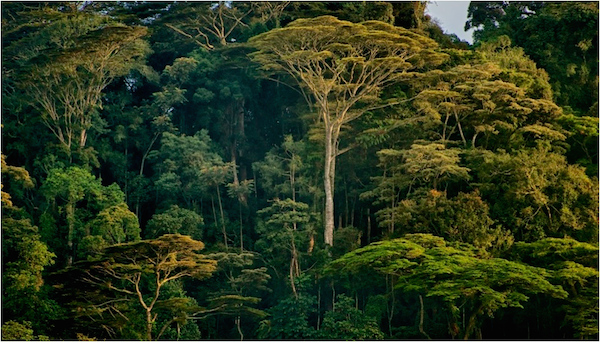 Rainforest habitat, as it was across most of Africa during Atheris early radiation in Miocene and the present day habitat of most of the Atheris species. Photo by Michele Menegon. 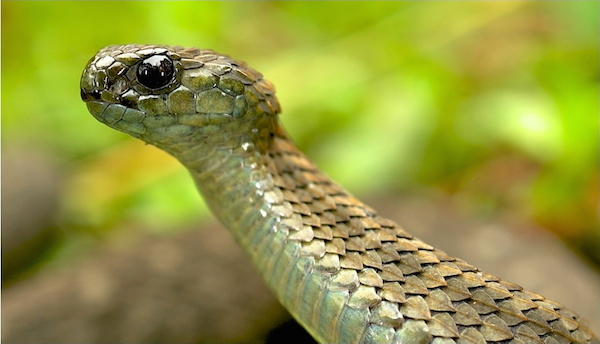 “All but one Atheris species are arboreal snakes, with long muscular body and prehensile tails, probably ambushing preys while sitting on branches,” co-author Michele Menegon told mongabay.com. “Atheris barbouri is an interesting anomaly probably, again, due to changes in local climate at the time of its diversification. It lives in the leaf litter and, despite being closely related to arboreal species, it lost the elongated body and the prehensile tail, typical of the other species, and became a terrestrial, short and stout small viper, probably feeding on terrestrial arthropods.

Because of their naturally fragmented habitat, many Atheris vipers are restricted to tiny habitats. One has been found only in a game reserve in Uganda, another on two isolated mountains in northern Mozambique.

“The most recently described species, Atheris matildae, is known only from a tiny fragment of forest in southern Tanzania, the locality is kept secret by scientists to avoid illegal harvesting– given the popularity of vipers in pet trade,” Menegon said, adding that viper range sizes in general are still poorly understood. 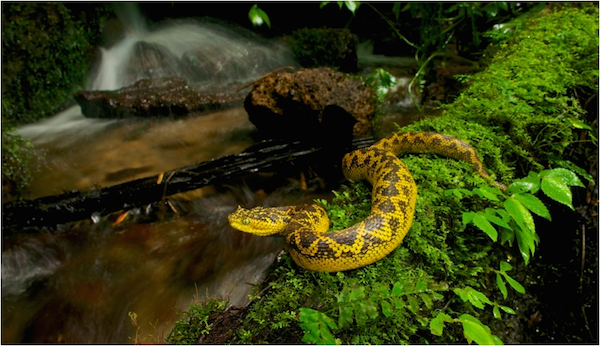 Atheris matildae, a recently discovered species in the Livingstone Mountains of Tanzania. Photo by Michele Menegon.

Surprisingly, the Eastern Arc Mountains, while being one of the oldest ranges in the region, has some of the youngest Atheris species. The researchers suggest this may be because the range simply wasn’t colonized by vipers until relatively recently. This resulted in a C-shaped movement to Atheris evolution, with the Eastern Arcs representing the last stop for the snakes.

The Eastern Arc Mountains are also one of the vipers’ last refuges, with lowland forest disappearing at a quick rate. Already naturally fragmented and scattered due to the region’s climate – only higher elevations are cool and moist enough to support forests – the mountains’ rainforests are being deforested away evermore by clearing of forest primarily for farmland. According to data from Global Forest Watch, the area comprising these mountains lost 179,000 hectares of forest from 2001 through 2012—even in places demarcated as Protected Areas. 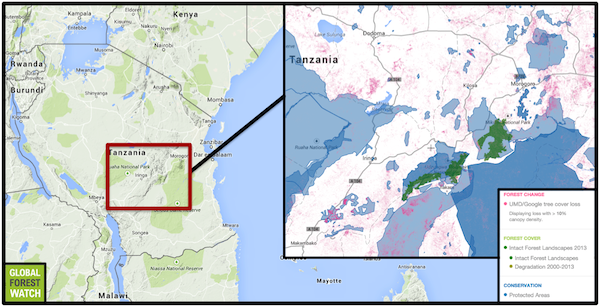 The Eastern Arc Mountains are the site of the las radiation of Atheris viper species. The region has lost 179,000 hectares since 2001. Map courtesy of Global Forest Watch. Click to enlarge. 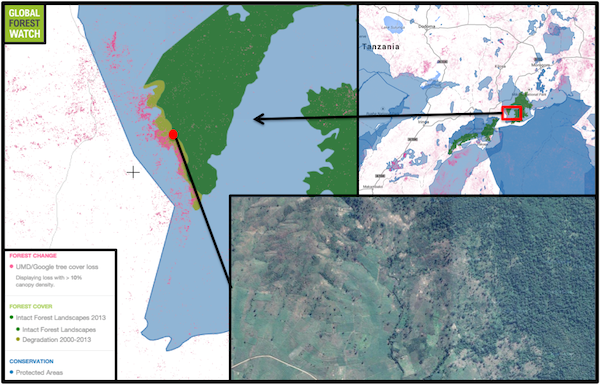 Even Mikumi National Park is not immune to deforestation, with sub-montane forest cleared for farmland within park boundaries. Map courtesy of Global Forest Watch. Click to enlarge.

According to Menegon, direct forest clearing will likely be exacerbated by global warming. As carbon emissions crank up atmospheric temperatures worldwide, the oases at the tops of the rift mountains will be especially vulnerable, and their wildlife that evolved to live in a cool, wet climate will have nowhere else to go.

Surprisingly, collection for the exotic animal trade is another big threat to these vipers. Because who wouldn’t want a pet that lies in wait at face-level to strike with teeth filled with deadly venom to which there is no known antidote?

“Not much is known about Atheris venom except that it is strongly hemotoxic, causing pain, swelling, and blood clotting problems,” Menegon said. “There are a number of reports of bites that have led to severe hemorrhaging and at least one case was fatal. An antivenin specific for an Atheris bite does not exist.” 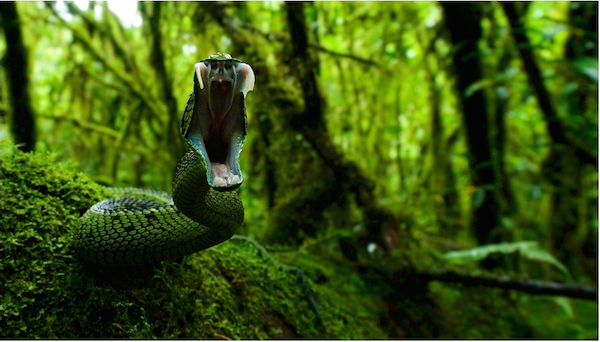 But if these species naturally evolved amidst upheavals that changed their habitat, can’t they cope with the changes facing them today? According to Menegon, the answer is no. The climatic shifts brought about by the formation of the rift happened on a geologic time scale of thousands to millions of years. Today, changes are happening much more rapidly, at a rate that does not allow a grace period for evolution—only decline and extinction.

“Today the main threat is habitat destruction and in specific cases, individual over-collection for the pet market. Range restricted species could be brought to the brink of extinction in few decades by the combination of these two factors,” Menegon said. “Many species of Atheris are montane cold-adapted organisms and they tend to escape rising temperatures by altitudinal range shifts. Given that they often occur in isolated forest remnants at, or close mountain summits, altitudinal range shifts due to climate change could represent a real threat on a long-term perspective.

“It will be difficult to resolve such a problem, and the creation of ex-situ conservation strategies such as translocation to other suitable sites might be the only solution.” 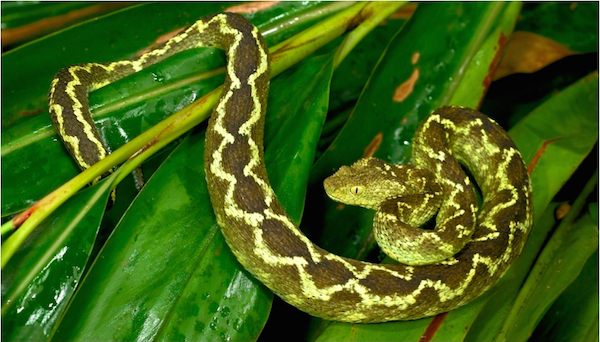