An ocelot in Colombia. Photo by: Brodie Ferguson.

By comparing camera trapping findings with genetic samples taken from feces, biologists have determined that the density of ocelots on Barro Colorado Island in Panama is the highest yet recorded. There are over three ocelots per every two square kilometers (0.77 square miles) on the island, according to a new study published in mongabay.com open-access journal of Tropical Conservation Science.

“Even our density estimates based on minimum number known alive…are 1.6 times greater than the densest ocelot population previously reported from the northwestern Amazon of Peru,” the researchers write.

Overall, the study estimated a density between 1.59-1.74 ocelots per square kilometer. Meaning, the island—which covers 15.43 square kilometers-could house between 24 and 27 ocelots. One of the most studied forests in the tropics, Barro Colorado Island is a nature reserve that was created when the Chagres River was damned in 1914.

But, why so many ocelots on the island? The scientists put forward a number of theories: ocelot density might be so high due to high prey availability, the difficult of moving off the island (which involves swimming across a man made lake), and the high level of protection on the island from poaching. 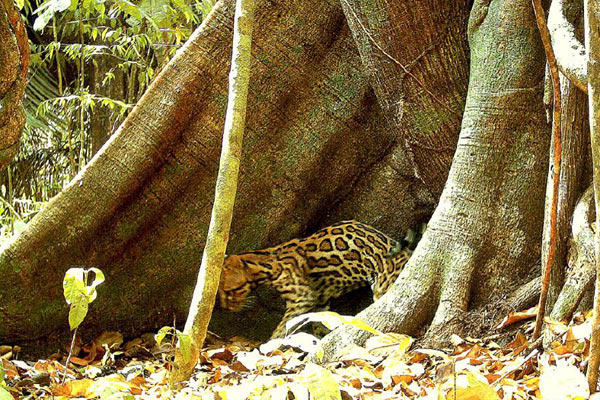 Ocelot using latrine on Barro Colorado Island caught on camera traps. In order to collect ocelot feces, the researchers had to find and then regularly visit the cats’ communal latrines. Photo by: Rodgers et al.

But it could also be due to a general lack of top predators on the island, such as as jaguars (Panthera onca) and pumas (Puma concolor). Known as mesopredator release, this process means that when top predators largely disappear, medium-sized predators, i.e. the ocelots, see a sudden boost in populations, due to decreased competition and less harassment from the top felines.

Jaguars and pumas occasionally visit the island by swimming across the lake, but appear to stay on the island only temporarily. It’s likely the island is too small for these big cats.

Although the study recorded the remarkable ocelot density on the island, it was actually conducted to test how reliable estimating density is from genetic information collected from feces compared to camera trapping. The biologists found that both methods produce similar results when using the modeling software, DENSITY, a finding that makes collecting scat a possible viable option for estimating densities of other animals.

Ocelots (Leopardus pardalis), a medium-sized cat, ranges from Argentina north to the very southern U.S., including sightings in Texas and Arizona. The cat is listed as Least Concern by the IUCN Red List, yet remains imperiled by habitat destruction, the pet trade, and killing—often illegally—for its coat or as revenge for attacks on poultry.