Is captive breeding the final resort for the Sumatran rhino?

No more than 75 Sumatran rhinos remaining in wild

Nearing extinction, the Sumatran rhino (Dicerorhinus sumatrensis) is running out of options. A native of Indonesia and Malaysia, the Sumatran rhino has declined in the past 30 years from an estimated 800 individuals to no more than 75 remaining today. So far there have been three ad hoc meetings held in 1984, 1993, and 2013, each attempting to develop policies that would potentially save this critical species. But these policies have failed and, according to a new paper, an aggressive strategy is needed if the Sumatran rhino is to have any chance of avoiding extinction.

In a new paper entitled, “The last chance for the Sumatran rhinoceros?”, Francesco Nardelli calls for an intensified breeding plan in the hopes of saving this declining species. Nardelli, an Italian naturalist and founder of the Sumatran Rhino Project, believes that such a breeding project–which would take place ex-situ or on a conservation site monitored by humans–is the last remaining hope for the Sumatran rhino.

Even though Nardelli admits biodiversity is best preserved through in-situ methods, ex-situ breeding is the only way the Sumatran rhino will be able to multiply adequately. He recommends that conservationists capture isolated rhinos and bring them together for breeding purposes.

The Sumatran rhino has been driven to dismal numbers due to poaching and habitat destruction. The current low population density means male and female rhinos rarely meet, and even more rarely, successfully breed. This situation has led to “no induced ovulation, tumor development in the reproductive tract of females, and low sperm activity in males,” Nardelli told mongabay.com.

Only through ex-situ tactics could isolated rhinos found in wild conditions be brought together with members of the opposite sex in the hopes of increasing reproduction, argues Nardelli.

Today, only nine rhino’s are held in ex-situ conditions, five in Sumatra in Indonesia, three in the state of Sabah in Malaysian Borneo, and one in the Cincinnati Zoo. According to the article, these rhinos are held in “large, natural fenced areas” and are “carefully monitored and protected.” In the past 13 years, four rhinos have been successfully born in captivity, but three of these were all born to the same pair.

Ex-situ conditions are the final resort for many endangered species, since it is not ideal to remove animals from the wild. However, the Sumatran rhino is so close to extinction that human intervention is necessary, argues Nardelli. Furthermore, according to Nardelli, the information and knowledge surrounding the care of the Sumatran rhino is only getting better, allowing researchers to avoid mistakes made in the past.

“Breeding Sumatran rhinos is a lengthy course of action, so time is of the essence,” Nardelli writes, who argues that the process needs to move as quickly as possible to ensure the recovery of the rhino population. But for this to go forward, the Indonesian government must authorize a conservation project plan. Once this is approved, new ex-situ breeding tactics may commence. However, as Nardelli explains, this is a very sensitive issue in Indonesia, “the Government is reluctant to make new moves with a critically endangered flagship species, so a dialogue must be initiated very tactfully to renovate their confidence.”

According to Nardelli, who notes that his views do not necessarily represent those of the IUCN or Save the Rhino International, conservationists must employ a collaborative and steadfast ex-situ preservation program to keep the Sumatran rhino from ultimate extinction.

“Only stopping habitat destruction, inbreeding depression and poaching would save the Sumatran rhino. Are these options possible? Unfortunately not,” Nardelli concludes in his paper. “We have to look at the situation from a realistic perspective: the Sumatran rhino needs essential action, NOW.” 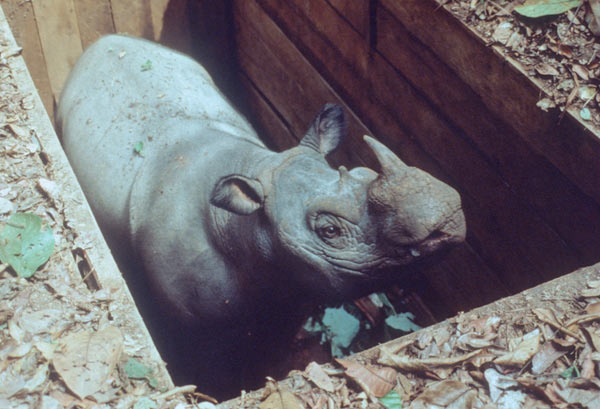 Pit fall traps are the current safe method of capturing these animals. Courtesy of Alain Compost 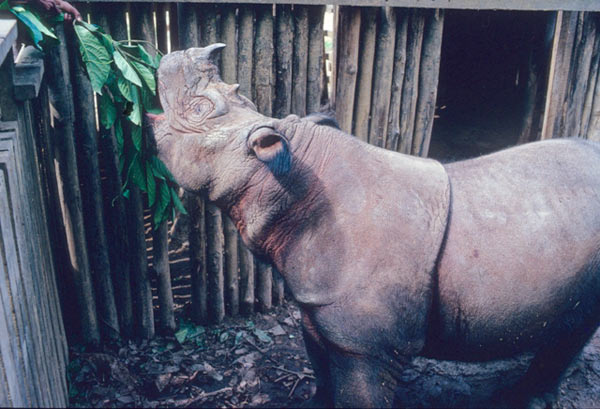 A Sumatran rhino held in captivity being fed. Courtesy of Alain Compost 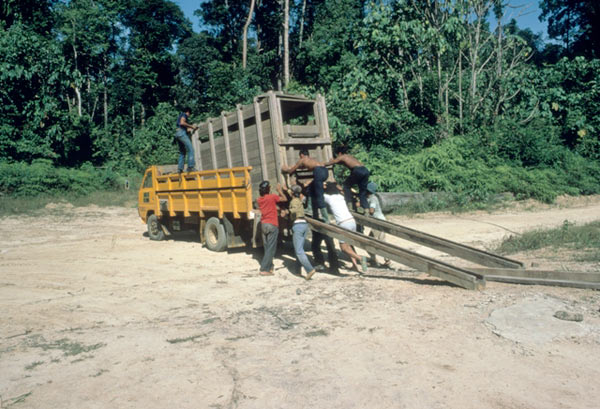 A captured Sumatran rhino being loaded onto a transport truck. Courtesy of Alain Compost

(11/26/2014) In keeping with recent efforts to ramp up action against environmental crime, INTERPOL has highlighted nine fugitives for breaking laws related to illegal logging, poaching and the wildlife trade, illegal fishing, and waste dumping, among other crimes.

(11/24/2014) South Africa has surpassed last year’s grisly record for slaughtered rhinos—1,004—more than a month before the year ends. In an announcement on November 20th, the South African Department of Environmental Affairs said that 1,020 rhinos had been killed to date.

(11/19/2014) Northeastern India boasts nearly 44 percent of the country’s dense forests, and contains one of the most biodiverse areas in the world. However, the region lost approximately 548,440 hectares of tree cover—more than 3 percent—from 2001 through 2012. Sonitpur, Assam, has been particularly hard hit as people flooded into the area and cleared forest.