The views of the people who live in forests around the world often get swamped in the debate about how to make the best use of forest resources. Debates include the preservation of carbon stocks and biodiversity as well as encouraging economic development, often through resource extraction and exploitation, often leaving little room for the perspective of indigenous communities.

But a new report aims to change that dialogue and was presented December 5 at United Nations Climate Change conference (known as COP) in Lima, Peru, titled “Revealing the Hidden: Indigenous Perspectives on Deforestation in the Peruvian Amazon.” Published by the Forest Peoples Programme, an international advocacy group that works to protect the rights of forest communities, and the Peruvian indigenous organization AIDESEP, the report examines the effects of timber harvesting, gold mining, agriculture, and oil and natural gas drilling that have been on the rise recently in the Peruvian Amazon. 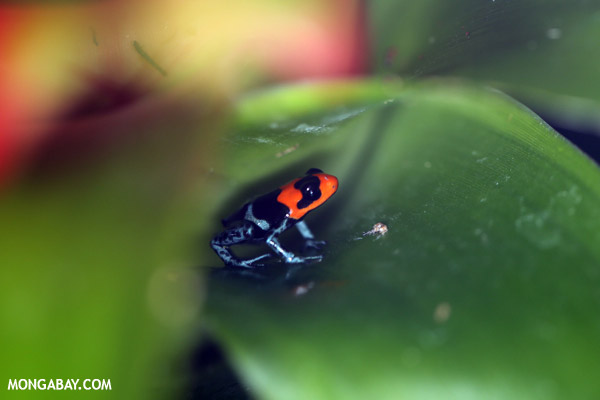 The Peruvian Amazon is home to a vast array of species, such as this Ranitomeya benedicta dart frog. Photo by Rhett A. Butler.

The authors of the FPP paper found that Peru’s laws protecting its forest aren’t always followed, especially as investors intent on profits from palm oil, gold, fossil fuels, and cacao have come to view the South American country as an ideal staging ground for business opportunities.

“The loggers aren’t just cutting our timber: they’re cutting our ancestral territories too,” said Alfonso López, president of ACODECOSPAT, a federation of 57 indigenous communities, who was quoted in the report. According to the report, 80 percent of Peru’s timber exports have been harvested illegally.

The authors also voiced concerns that deforestation in Peru is increasing, even as the country has pledged to stop net deforestation entirely by 2020. The report points out that these communities who have depended on the forests for so long might also represent a key to saving them.

“There have been some good studies that show a lot of the titled indigenous lands, at least in Brazil, do fairly well at preventing deforestation, sometimes better than the official protected areas,” said Clinton Jenkins, a visiting professor at the Institute of Ecological Research in Nazaré Paulista, Brazil. Jenkins, who was not involved in the FPP study, also has experience working in Peru.

Problems may arise when the government fails to recognize indigenous claims to the land and allows outsiders to set up extractive industries. About 15 million hectares of the Peruvian Amazon are titled, meaning that some legal recognition of indigenous control in those areas exists. According to the report, however, the government has yet to title another 20 million hectares that, in FPP’s view, should be titled to these communities.

Titling land isn’t a panacea, though. The report points out that oil and gas concessions – which are often coupled with deforestation, water contamination and road building that spurs further forest destruction, said Jenkins – cover 80 percent of the Peruvian Amazon, overlapping in many places with titled indigenous lands. The authors write that they found little evidence that the communities had a say in the establishment of these concessions under a principle known as “free, prior, and informed consent.”

In countries like Peru, “You have a real issue with balance of power,” Jenkins said. “These industries are so wealthy and have so much more power and influence with the government compared with the people who are actually on the land, it’s not a fair fight.”
Marcial Mudarra, president of the indigenous organization CORPI based in San Lorenzo, was quoted in the report as saying, “We see that instead when it’s a multinational company everything gets sorted out quickly and in their favor.”

National policies based on economic development priorities shape what happens to the forest. “The government wants to do business with the jungle,” Mudarra said. “That’s why they don’t title indigenous territories.”

Still, the authors argue that titling is necessary for indigenous communities to establish a legal foothold.

“As long as we don’t have land title, the loggers won’t respect our property,” said Edwin Chota, a forest campaigner and representative of the Ashéninka people of the Ucayali Region. “They threaten us. They intimidate us. And they’re armed.” Chota was assassinated in September 2014 near Peru’s border with Brazil. His supporters fear his death was retribution by illegal loggers.

In addition to documented cases of violence against indigenous communities, extractive industries adversely affect the environment, write the report’s authors. Gold mining has recently surged in some areas of Peru. In the Madre de Dios region, where an estimated 97 percent of gold mining is done so illegally, deforestation rates are three times what they were before 2008. And mining can be particularly deleterious to rivers, on which so many forest communities depend.

“We used to fish in the River Puquiri, but it’s not a river anymore due to the tailings and sediment,” said an indigenous leader from Madre de Dios. “The miners work there now and there’s no fish. It’s all mud.” 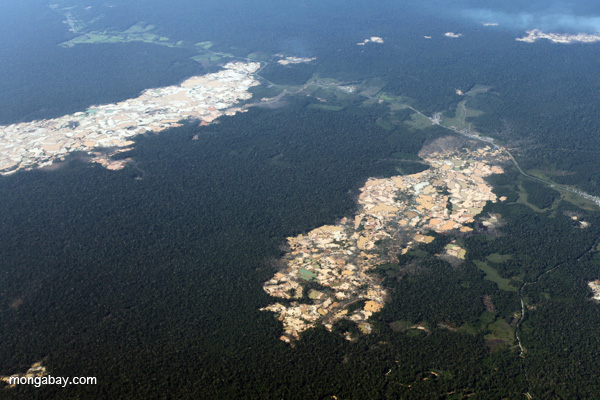 Small-scale gold mining often involves the use of mercury, a neurotoxin, to separate ore from substrate. In 2011 alone, nearly 1,400 tons of mercury was used for gold mining, making it the world’s largest source of environmental mercury pollution. Oil and natural gas extraction, too, often releases dangerously high levels of heavy metals into rivers, according to the report.

And the roads that these industries build, while a boon for commerce, tend to perpetuate a cycle of forest destruction. “A huge impact of the roads is the migration it causes,” said Robert Guimaraes, vice president of FECONAU, an indigenous federation in Ucayali in the report. “With them comes a cocktail of problems: illegal logging, coca cultivation and illegal mining.”

In fact, the report states “75 percent of all deforestation occurs within 20 kilometers of a road.” Data from Global Forest Watch data supports this, showing much of recent deforestation has happened along highways. Maps of the regions of Loreto and Ucayali in Peru show concentrations of FORMA alerts, which show areas of likely forest loss in near-real time, tracking major thoroughfares through the Amazon. 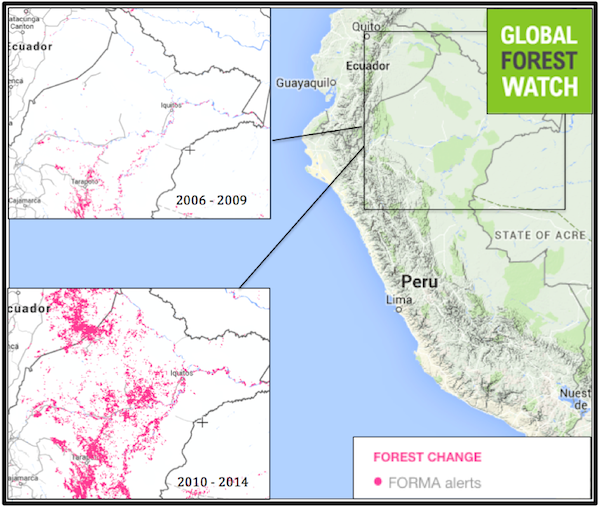 The two maps of the Loreto Region in Peru show a marked increase in FORMA alerts, which identify areas of probable forest loss on a semi-monthly basis. As part of the government’s oil palm development plan, Peru’s leaders propose opening up 100,000 hectares of land for palm oil production. Map courtesy of Global Forest Watch. Click to enlarge. 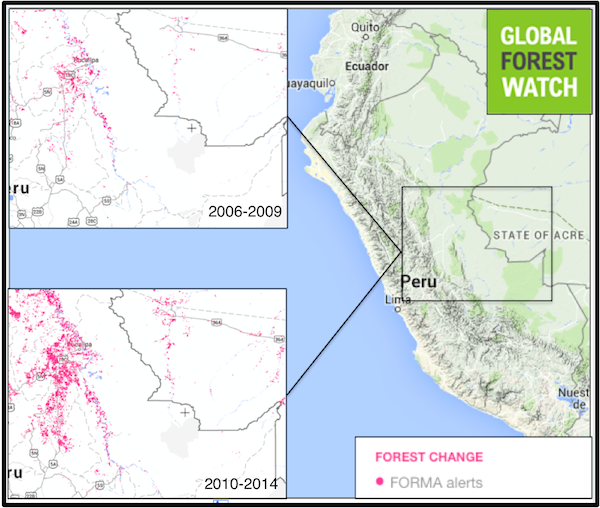 The two maps of the Ucayali Region in Peru show a marked increase in FORMA alerts, which identify areas of probable forest loss on a semi-monthly basis. Forest campaigner Edwin Chota was killed in Ucayali in September 2014, and his assassination has been linked to “logging mafias” in Peru. The region has become a target for investors interested in timber and oil palm. Map courtesy of Global Forest Watch. Click to enlarge.

Along with illicit gold mining, industrial agriculture investments, especially oil palm, have contributed to recent land degradation and clearing. The authors figure that 20 percent of all deforestation in Peru’s piece of the Amazon resulted from these two sources in 2013. According to the report, the government plans to develop palm oil plantations on more than 1.4 million hectares of Peruvian land.

This makes the need for land titling all the more pressing, write the paper’s authors. They assert indigenous communities should be given the rights to control what happens on their land – and not just for the sake of their own livelihoods. Legally recognized indigenous lands have deforestation rates that are 20 percent lower than the average rate in the Peruvian Amazon, and more than 95 percent lower than that of privately held land, according to the report.

Not only do indigenous communities protect Peru’s swath of the world’s largest rainforest, but in doing so they safeguard the massive amount of carbon it contains. “Evidence gathered from Brazil’s indigenous territories strongly suggests that these lands are far more carbon-protective compared with neighboring forms of land use,” writes ecologist Greg Asner of the Carnegie Institution for Science in Stanford, California, and his colleagues in a paper on high-resolution mapping of carbon stocks that he presented at the conference.

In an email to mongabay.com, Asner, who was not involved in the FPP report, put it more unequivocally: “The indigenous lands are among the very few best protectors of Peru’s forests.”