Impacts of deforestation on Amazonian river ecosystems could be far-reaching A soy field abuts a forest surrounding a river in Mato Grosso, Brazil. Photo by Rhett A. Butler.

Vast areas of the Amazon forest are being destroyed for agricultural uses, mainly industrial-scale soybean crops, and turned into pasture land for livestock. The riparian forests surrounding streams have not been exempt from this trend. And though headwater streams in the Brazilian Amazon are valuable aquatic ecosystems, little research has been done to determine how deforestation is impacting the streams’ environmental integrity and ability to function as natural habitats.

That is, until now. A study by researchers in Brazil published this week in mongabay.com’s open-access journal Tropical Conservation Science has found that “altered streams” in the Southern Amazon–i.e., those located in forests that have been degraded or destroyed–have lower oxygen concentrations, an average increase in water temperature of 1 degree Celsius, and less available organic material.

In other words: deforestation is degrading the habitability of Amazonian streams, and this could have impacts beyond just riparian zones. Cattle ranching is a primary driver of deforestation in the Brazilian Amazon. Photo taken in Mato Grosso by Rhett A. Butler.

The study’s lead author, Monica Bleich of the National Institute of Amazonian Research, told mongabay.com that she was surprised by the severity of the impacts of deforestation on the 10 Amazonian sites her team studied, and that these effects could certainly be felt more widely. “Considering the high density of headwater streams in the Amazon,” Bleich said, “the degradation of these ecosystems may impair significantly the structure and function of large [Amazonian] rivers.”

Bleich and her team of researchers studied 10 sites in Mato Grosso state in Brazil. At each site, they selected one pristine headwater stream and one with riparian deforestation and took three sets of samples between July 2010 and May 2011.

Amazonian aquatic ecosystems vary throughout the dry and rainy seasons, so the researchers tracked habitat conditions at different stages of the water cycle. What the study found was that partial or total deforestation of Southern Amazonian riparian forest leads to “loss of variability in headwater stream habitat structure across hydrological periods, making habitat conditions more homogeneous and simplified throughout the year.” A simplified habitat is less capable of sustaining an abundance of life.

Bleich says that these results not only show that it is necessary to preserve riparian forests, but also that the rehabilitation of degraded riparian areas is essential to ensure that aquatic ecosystems provide a suitable habitat structure for wildlife that rely on headwater streams for food and shelter.

According to the study, however, there are significant hurdles to accomplishing the necessary conservation and rehabilitation measures: “a paradigm shift is necessary to conserve the Amazon, one that expands the focus beyond the forest to aquatic ecosystems,” the authors write. “Restoring the structural complexity of altered streams is a great challenge, as it requires more than simply introducing physical elements into stream channels or planting tree species in the riparian zone.”

According to Global Forest Watch data, Mato Grosso lost 7.9 million hectares of forest—nearly 14 percent of its forest cover—between 2001 and 2012. The study states mining and logging have been damaging rivers in the area since the 1970s, with cattle ranching becoming a primary driver of deforestation in the 1990s. 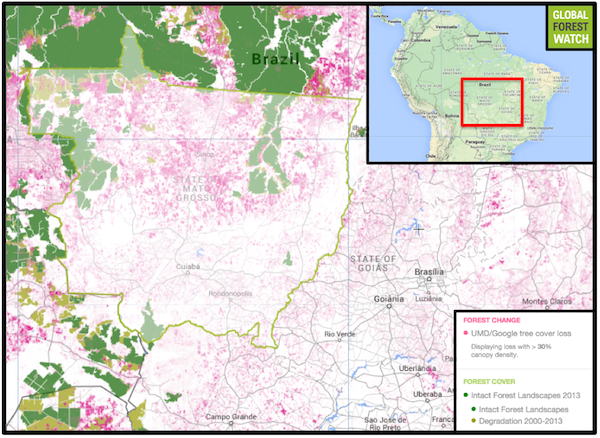 With 7.9 million hectares of tree cover lost from 2001 through 2012, Mato Grosso has only a relatively small portion of intact forest left. Map courtesy of Global Forest Watch. Click to enlarge. 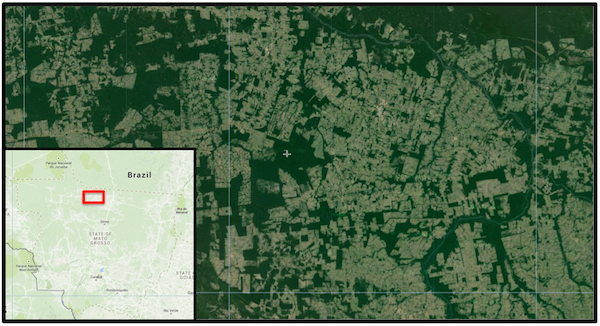