Greenpeace: zero deforestation pioneer makes progress, but still has work to do

PT Buana Adhitama, Indonesia , 13 November 2013. New oil palm plantation development amid evidence of recent forest clearance in PT Buana Adhitama (BAT). The area had been identified as HCS forest and as belonging to the local community. PT BAT is a GAR subsidiary in Central Kalimantan. Image and caption ©Jufri/Greenpeace

Half a decade ago, Golden-Agri Resources (GAR) was losing customers right and left in the midst of a Greenpeace campaign that blamed the Singapore-based palm oil giant for destroying forests in Indonesia. Then in February 2011, GAR surprised the world when it announced it would no longer clear rainforests or peatlands for new plantations. The company also committed to resolving social conflicts and respecting the right of local communities to reject plantation development on their traditional lands. Observers thought it could be mark the beginning a transformation in how palm oil was produced.

Nearly four years later, the palm oil sector is indeed being transformed. A raft of companies have pledged to eliminate deforestation from their supply chains based on the safeguards established in GAR’s policy. GAR has also moved to strengthen its commitment, extending the policy beyond its own plantations to its suppliers.

But a report released today by Greenpeace shows that while GAR’s commitment appears genuine, the company still faces implementation challenges, showing the the road to zero deforestation is long and complex.

“After three and half years, the record in Indonesia and Liberia is mixed,” states the report. “GAR still has much work to do if it is to ensure that its palm oil is truly responsible.”

“Important progress has been made to end deforestation within GAR’s supply chain. As a result of the company’s policy, a method has been developed to identify forest for conservation. Known as the High Carbon Stock (HCS) Approach, this is now being adopted across the palm oil sector and beyond,” states the report.

Greenpeace adds that GAR has used its position to press for government reforms to support forest conservation. It has also excluded 30,000 ha of potential HCS forest from planned conversion and agreed to restore areas that were cleared in breach of its commitment. 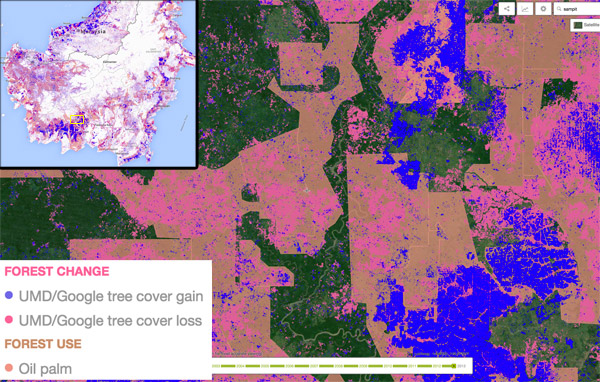 Areas where Greenpeace says GAR needs to improve including resolving conflicts and implementing Free, Prior, and Informed Consent when engaging with local communities. It notes that social issues remain a problem in Liberia and that GAR continues to do business with companies involved in deforestation and peatlands conversion.

“[GAR must] improve social performance – ensuring Free, Prior and Informed Consent (FPIC) and conflict resolution in dealings with local communities,” says the report. “There is also a need to make additional progress in the quality of HCV assessment, in transparency, and in the application of responsible practices across its supply chain.”

Greenpeace says that despite these issues, GAR can continue to play a critical role in transforming global commodities supply chains.

“GAR should join other companies in pressing for the transformation of the industry through the introduction of appropriate legislation. Specifically, and in line with its recent KADIN pledge, GAR and the other signatories need to urge full legal protection for peatlands and HCS/HCV forests. Finally, the company must transform its relationship with local communities. Their rights and livelihoods have to be respected, as part of a process of incentives and partnerships intended to achieve the long-term conservation of HCS forests.”

In response, GAR said it welcomed the “constructive” feedback and is working to “improve our operational procedures to ensure effective implementation of our
policies.”

“Golden Agri-Resources (GAR) is aware of challenges in the implementation of our pioneering Forest Conservation Policy (FCP), which was launched in 2011. As part of our policy, we have set aside around 30,000 hectares of potential high carbon stock forests in Indonesia for conservation,” GAR said in a statement. “The contribution and guidance from Greenpeace and The Forest Trust (TFT) over the years have helped us stay focused in our efforts to deliver traceable, deforestation-free palm oil. We believe that Greenpeace’s suggestions will benefit stakeholders and strengthen our commitments to sustainable palm oil.”