A member of the Furnariidae family, the small brown and beige bird possesses rusty “spine-like” tail feathers and inhabits densely vegetated areas. Scientists estimate the total population to range from 140 to 500 individuals. In 2012 the IUCN declared the Masafuera Rayadito to be a Critically Endangered species. With a distribution limited to a single island—Alejandro Selkirk—in the Juan Fernandez Archipelago off of Chile’s Pacific coast, the species is particularly vulnerable to extinction. 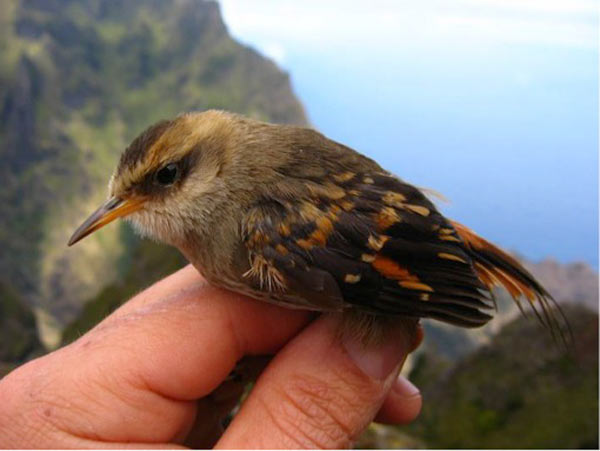 While closely related taxa, including sister species, Thorn-tailed Rayadito (Aphrastura spinicauda), have previously undergone genetic study, Gonzalez conducts the first such investigation into the divergence of the Masafuera Rayadito from its mainland relatives.

The results of this study confirm that the Masafuera Rayadito and the thorn-tailed Rayadito are close relatives and estimate that the species diverged between 0.38 and 0.76 million years ago. These estimates are consistent with the geological age and origin of the Juan Fernandez Archipelago. “The level of genetic divergence between Aphrastura masafuerae and A. spinicuada supports a recent colonization of the Juan Fernandez Archipelago by the Masafuera Rayadito in the South Pacific Ocean, approximately 0.65 [million years] ago,” states Gonzalez in the study.

Due to its biogeographically remote location, Alejandro Selkirk Island harbors a notably high level of avian endemism—species found nowhere else in the world. In the case of the Masafuera Rayadito, uncertainty lingers about original colonization of the island. Gonzalez explains, “… [I]t remains unclear whether this avian species arrived at Alejandro Selkirk by a direct colonization from the mainland or from neighboring islands…”

According to Gonzalez’s study, the Masafuera Rayadito should remain a top conservation priority, as it represents a “taxonomically distinct” species and contributes critical phylogenetic diversity. Despite presumed population increases in the past decade, habitat loss by way of conversion to livestock grazing lands continues to threaten the existence of the Masafuera Rayadito. Increasing predator populations, natural—Masafuera Hawk—and invasive—feral cats and rats, also exert pressure on the Masafuera Rayadito.

Gonzalez advises additional investigation of intraspecific genetic variability to understand how the founding population has survived in isolation for approximately 600,000 years.

(12/20/2014) Seemingly every year scientists set a new record with the number of species they describe. 2014 will be no exception. Below are some of the ‘new species’ highlights from the past year. The list includes species whose descriptions were first published in 2014. Some of the ‘discoveries’ occurred in years prior.

(12/17/2014) The tropical montane forests of the Cameroon mountain ranges boast fertile volcanic soils, high biodiversity of grasses and non-woody plants, as well as many endemic bird species that can be found only in this high-altitude region. Yet, many of these endemic bird species may be at risk due to increased nest predation linked with human-induced forest degradation, according to a new study.

To collect or not to collect? Experts debate the need for specimens

(12/10/2014) In 1912, a group of intrepid explorers led by Rollo and Ida Beck, widely acknowledged to be the foremost marine bird collectors of their time, embarked on a most remarkable effort to catalogue South America’s oceanic birds. Museums of the day held opportunistically collected specimens from scattered sources, but rarely did these include ocean-bound birds that spent little time near the coast.