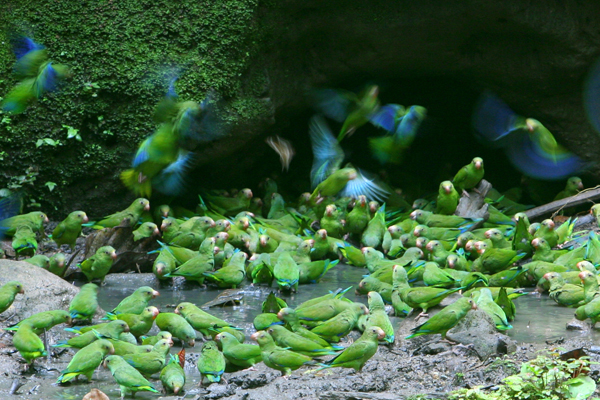 Cobalt-winged parakeets (Brotogeris cyanoptera) at a clay lick in Yasuni National Park in the Ecuadorian Amazon. Photo by: Jeremy Hance.

A visit to a rainforest slated for oil drilling has blown up into a diplomatic row between Ecuador and Germany. Ecuador has said it will no longer partner with Germany on environmental issues and will return aid money, after the South American government discovered that German legislators were attempting to visit the much-embattled Yasuni National Park.

“If they think they had the right to doubt the word of Ecuador’s government on the issue of Yasuni because they were providing funds, we’ll give them their money back with interest,” Ecuador’s Foreign Minister, Ricardo Patino, said. “Ecuador unilaterally ends all cooperation with Germany on environmental issues.”

Ecuador has said it will return around $9 million in funds from Germany for environmental projects around the country. The country cancelled the visas of the visiting German legislators and did not allow them to visit Yasuni National Park as planned. The German legislators were set to meet with groups opposed to oil drilling in the park—which scientists say may be the most biodiverse on the planet—and to see on the ground the impacts of fossil fuel extraction.

For her part, German Environmental Minister, Barbara Hendricks, said that canceling the visas was “completely unacceptable,” and called Ecuador’s action “an unfriendly way to treat the delegation.”

Oil drilling has been ongoing inside and at the edges of Yasuni National Park since the 1970s, yet the issue took on new urgency when Ecuador announced plans to drill inside the park’s most remote blocs, known as the Ishpingo-Tambococha-Tiputini blocs or ITT. The announcement came after Ecuador first attempted to raise $3.6 billion from the international community to not drill inside the park. When the money didn’t come fast enough, however, Ecuador dropped the bold initiative. Activists tried to spare the park through a national referendum, but the government’s National Electoral Council thew out the majority of the activist’s signatures.

He told Germany that Ecuador ““stopped being a colony 200 years ago.”

Correa’s government has been cracking down on environmental groups as criticism over Yasuni National Park and other environmental issues mounted. A year ago, the government shut down one of the country’s biggest environmental NGOs, Fundación Pachamama, over actions regarding the oil issue.