Children ‘clean’ oil spill with kitchen utensils in the Sundarbans 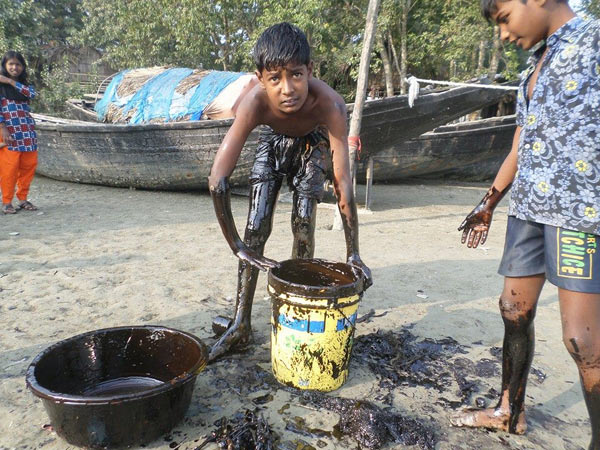 Government inaction has pushed local children and families to attempt to clean up the oil spill with little more than household items and no protective gear. Photo by: Kallol Mustafa.

On December 9th, a tanker slammed into another vessel along the Shela River in the world’s largest mangrove forest: the Sundarbans in Bangladesh. The tanker sank, spilling an estimated 75,000 gallons (350,000 liters) of fuel oil into waterways that are a part of a reserve for threatened Ganges river dolphins (Platanista gangetica) and Irrawaddy dolphins (Orcaella brevirostris). Activists and experts say the devastating spill is a sign of what’s to come as Bangladesh builds two coal power plants at the edge of the UNESCO World Heritage Site, prompting greater infrastructure, deforestation, and boat traffic inside the forest.

In the past few days, the oil has spread to cover about 350 square kilometers of the delicate ecosystem—including staining the Passur River—according to the Bangladeshi forest department. Yet, measures to contain and clean-up the oil spill have been crude at best.

“Local children and youngsters begun removing the already spilled oil from the Shela River using kitchen utensils like bowls, plates, and other cooking pots,” Mohammad Tanzimuddin Khan, a professor at Dhaka University, told mongabay.com. “They are doing it bare-handed without any protective gear. The local administration has declared cash incentive for the oil collectors. They have now opened three-four collection centers to purchase the furnace oil from them at the rate of BDT 30 ($0.38 US dollars) per litre.”

Clean up efforts fall on locals

Regional authorities have indeed depended almost wholly on locals in the area to deal with the oil spill without any equipment, training, or protection whatsoever. In addition to kitchen utensils, locals have been seen “cleaning” up the spill with sponges and shovels. 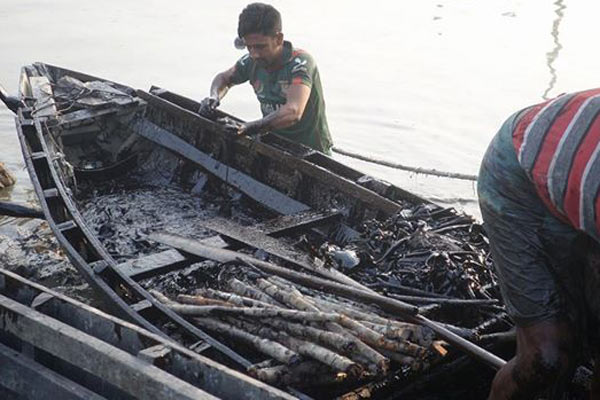 Locals land with a boat full of collected oil as well as branches coated in oil. The state-owned Padma Oil Company is paying locals for all the oil brought in. Photo by: Kallol Mustafa.

The Sundarbans, which extends across southern Bangladesh and into India, is home to around four million people, most of whom make their living directly from the great forest and it’s labyrinthine waterways.

Khan said the various managing authorities—including the forest department, the navy, the coast guard, and the port authority—”could not even decide on who would be the lead agency.”

He added that these authorities “absolutely did nothing other than watching oil consistently getting dispersed all around! A privately hired small vessel salvaged the sunken ship after two days of the oil spill in the Shela River! It could have been done immediately after the incident. The concerned authorities do not have even a single equipment to tackle such an oil spill.”

Footage of the oil spill shows waterbirds covered in oil and both children and elderly attempting to pull oil out of the water, while eyewitnesses report dead fish, crabs, mudskippers, monitor lizards, and otters. In addition, an Irrawaddy dolphin has been found dead in the area, although authorities aren’t yet sure if the oil pollution was the cause of its death and are planning a postmortem on the animal. 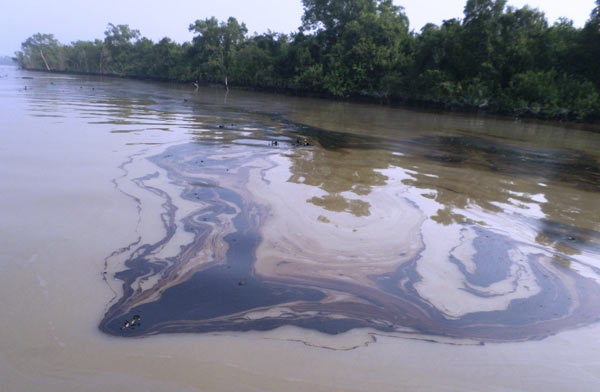 Oil from the spill seeps along the waterways of the Sundarbans. Photo by: Kallol Mustafa.

Amir Hosain, chief forest official of the Sundarbans, admitted that the authorities were unprepared.

“This catastrophe is unprecedented in the Sundarbans and we don’t know how to tackle this,” he told the AF, adding that “the oil spill has already blackened the shoreline, threatening trees, plankton, vast populations of small fishes and dolphins.”

Yet, Bangladesh’s shipping minister declared on Saturday that the oil spill “won’t cause serious damage.”

“The damage would’ve been far greater if it was diesel or petrol instead of furnace oil,” Shajahan Khan told reporters. “The chemical impact of furnace oil is minimal. It would have been worse during rains because the oil would have spread further. But now there won’t be any major damage.”

But experts disagree with the minister’s optimistic assessment. The impacts of the oil spill are likely to be many and long-lasting, according to Abdullah Harun Chowdhury, an environmental scientist with Khulna University. 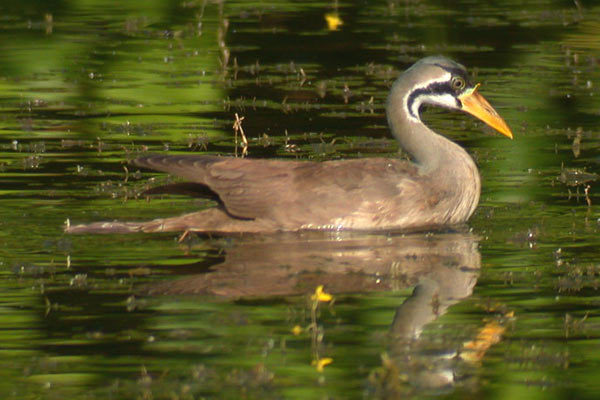 The masked finfoot is considered Endangered. Photo by: Tunpin.ong/Creative Commons 3.0.

Chowdhury told mongabay.com that the spill could hit phytoplankton in the area as sunlight won’t be able to penetrate the oil sheen causing negative impacts across the region’s food chain. Chowdhury also predicts a long-term impacts on animals beyond immediate mortalities, “like loss of breeding capacity, habitat loss, injury of respiratory organs, hearts and skins.”

The oil spill also came at a bad time: it’s breeding season for many of the native species caught by local fishers. Chowdhury said the spill is likely to hurt breeding for vital fish and shrimp populations.

“Intertidal zone and shallow creeks, canals and rivers sides are the ideal places of the eggs, larva…but these areas have been polluted by the thick oil layer,” he noted.

“So, there is no possibility of natural washing of the oil within short time,” said Chowdhury. 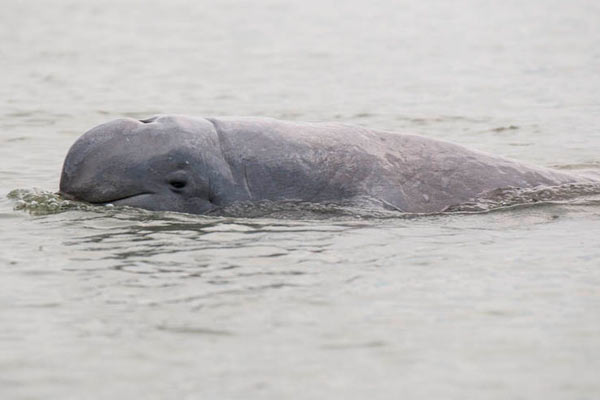 An Irrawaddy dolphin in Cambodia. Photo by: Stefan Brending/Creative Commons 3.0.

He further argued that an ecological adaptation of mangroves may make them particularly vulnerable. Many mangrove species have roots that are “air-breathing,” i.e. they sit above the water line and take in oxygen from the air. When the roots are coated in oil, it could damage and even kill some of the trees.

“Seedlings and some other plants will have died out,” he added. “Soil of the forest floor will absorb this polluted oil, and microorganisms of the soil and rooting systems of the plants will be affected by decomposition.”

In addition to threatening Ganges river dolphins and Irrawaddy dolphins—listed as Endangered and Vulnerable respectively—the oil spill could also impact a significant population of the masked finfoot (Heliopais personata), a shorebird listed as Endangered with an estimated population globally of only 1,000 individuals. The Sundarbans is also the only forest in the country that still houses Bengal tigers (Panthera tigris tigris), a subspecies also considered Endangered.

Mangrove forests are arguably one of the world’s most important ecosystems. They are vital nurseries for many species of fish and aquatic invertebrates, store tremendous amounts of carbon, and improve water quality. Moreover, as buffers against extreme weather and tidal waves, mangroves have been shown to save lives and decrease damages when disaster strikes. Yet, global society continues to destroy mangroves at staggering rates: 35 percent of the world’s mangrove forests were lost between just 1990 and 2010.

Environmentalists say this current disaster will likely be repeated in the future, if the government goes ahead with plans to build two large coal plants on the edge of Bangladesh’s largest forest. Construction is already occurring on the hugely-controversial 1,320 megawatt Rampal coal plant, which will sit just 14 kilometers from the edge of the forest. 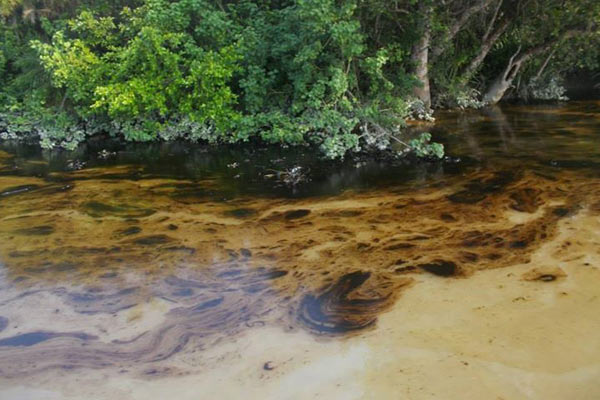 Oil stains the waters of the Sundarbans. Photo by: Mowgliz Elisabeth Rubaiyat.

“Ongoing construction of Rampal power plant triggered to initiate other so called development in that area,” said Mowdud Rahman an engineer with Southeast Asia Renewable Energy People’s Assembly (SEAREPA). “For instance, [the] Orion Group has already managed to get permission to build another power plant even nearer than the Rampal plant. Forest dependent local people are now forced to sell their land to land developers and other business groups who are there to make profit out of development activity.”

The push for coal plants in the Sundarbans has led to massive civil outcry, including a five day march that brought together thousands last year. Yet, the government has not been swayed to change course on its embrace of coal power.

“The recent accident is just an example that how sloppy the governmental management is in managing this world largest mangrove forest,” Rahman said.

He noted that the waterway through the Sundarbans where the spill occurred has only been used for three years and likely was created by the government to get ready for daily shipments of coal going through the mangrove forest to the planned coal stations. Environmentalists say that toxic coal spills will become likely in the future, as well as air pollution and water shortages due to demand from the plants. 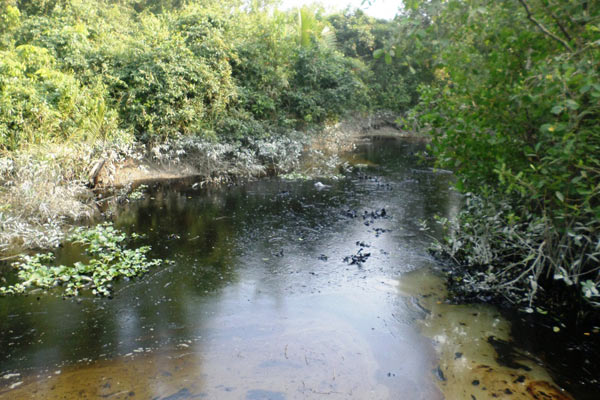 With the government doing little to stop it, the oil has spread around 350 square kilometers. Photo by: Kallol Mustafa.

Rahman said the oil spill should be a wake-up call for the Bangladeshi government—as this is exactly what environmentalists predicted when the coal plants were announced.

“Due to growing demand both from national and international level…[the] government can immediately stop and cancel all sorts of disastrous activity surrounding Sundarbans including Rampal plant and take steps to increase its regenerative capacity,” he said.

The UNESCO World Heritage Center has already put the Bangladeshi government on notice that it could strip the Sundarbans of UNESCO status if the forest isn’t better protected. UNESCO specifically cited concerns over the Rampal coal plant.

Climate experts have consistently rated Bangladesh as among the most vulnerable countries to global warming, making the government’s rush to coal even more controversial. The country recently released a master plan that pledges to install 15,000 megawatts of coal energy by 2030. This could potentially increase the nation’s total carbon dioxide emissions by 160 percent by 2030 at a time when many developing nations are setting eyes on having emissions peak in the near-term.

Rahman said if the government continued to pursue coal plants in the Sundarbans it would “ensure the extinction of this mighty forest in the name of development.”

If the country loses the forest—an apocalyptic prediction—the low-lying nation of Bangladesh will have little left to keep rising sea levels at bay,