While Toba Pulp Lestari (TPL) has made some strides towards becoming more environmentally conscious, conservation organizations are still concerned about continued deforestation as demand for dissolving pulp grows. 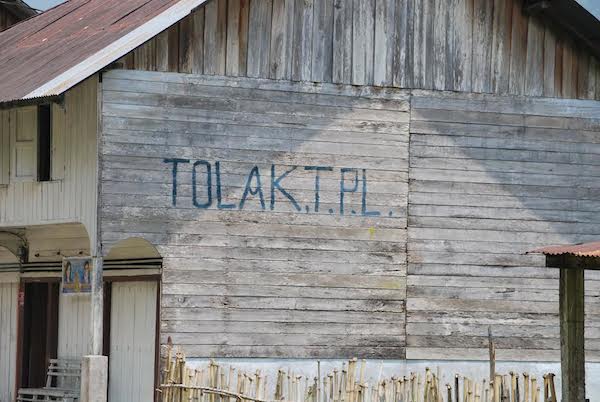 Graffiti on the side of a building not far from TPL’s switch mill in North Sumatra. It translates to “REJECT TPL,” according to Canopy Executive Director Nicole Rycroft. Photo by Canopy.

The owner of the only mill in Indonesia equipped to produce dissolving pulp, Toba Pulp Lestari (TPL), is being held out as emblematic of the risks the industry’s massive recent growth pose to endangered forests.

Indonesia is not the world’s biggest producer of dissolving pulp, but TPL’s increasing presence in the dissolving pulp market is seen as a major threat to the forests of North Sumatra, where it has a forest concession area of nearly 200,000 hectares just south of the Leuser Ecosystem. The company is also accused of labor abuse practices and human rights violations on its plantation, which provides the lumber for its mill.

Vertical integration is a common feature in the industry. Some 54 percent of the global dissolving pulp trade is handled by just five companies. This is not just a result of business acumen, however; the production of dissolving pulp is a highly inefficient process, with some publications alleging it converts a mere 35 percent of the lumber fed into the mill into dissolving pulp, so it makes sense for companies to have their mills close to their source of lumber, thereby cutting down on transportation costs. 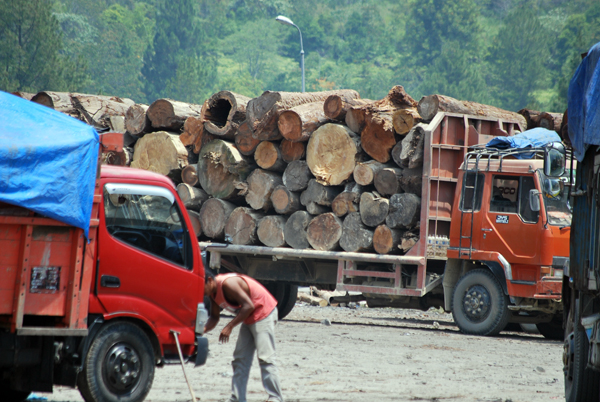 Given how inefficient the dissolving pulp production process is and the fact that global demand is on the rise, it’s no surprise activists are setting their sights on the industry. And to many, Toba Pulp Lestari deserves special scrutiny.

Toba Pulp Lestari is part of what Rainforest Action Network (RAN) has called “a rogue cartel of companies” controlled by Sukanto Tanoto, who is better known as the owner of Asia Pacific Resources International Ltd. (commonly referred to as APRIL), also a company that has received heavy criticism for its environmental and labor practices.

Rainforest Action Network, which calls TPL “one of the worst actors in pulp and paper,” says that more than 17,000 hectares of natural forest have been destroyed by the company, “impacting or displacing over 13,000 Indigenous people,” according to the group’s on-the-ground partner, Kelompok Studi dan Pengembangan Prakarsa Masyarakat.

Since founding its mill in North Sumatra in 1989, TPL has often been at the center of social conflict and the target of numerous protests by local indigenous and other forest-dependent people who claim the company has stolen their traditional lands and that its operations are polluting their air and water. “The mill has meant toxic effluent has polluted the area and has driven deforestation,” RAN’s Brihannala Morgan told mongabay.com.

Canopy Executive Director Nicole Rycroft said she has seen firsthand the impacts TPL’s operations have had on the local environment and its inhabitants. The vast monocrop plantation of eucalyptus that TPL uses to feed its mill is an image that has stayed with her. “I’m from Australia, I like Eucalyptus,” Rycroft said. “But that’s not what you should be seeing in Northern Sumatra, that’s for sure.”

According to Rycroft, workers on the plantation are paid just $5 a day and confrontations between TPL and the communities it is displacing have led to violence and arrests. She said runoff of fertilizers and pesticides is so bad that rice is becoming difficult to grow and the water buffalo the locals rely on are dying off in alarming numbers. “TPL’s plantation has a long history of both egregious environmental practices and social conflict,” Rycroft said.

Benjamin Joseph Mitai, Managing Director of TPL, told mongabay.com in an email that his company produces 175,000 tons of dissolving pulp annually at its North Sumatra mill, which is what’s known as a “switch mill,” meaning it can produce both pulp for paper and dissolving pulp. Mitai says that the company decides which type of pulp to produce at the mill “after considering market conditions, amongst other factors.”

He vehemently denies allegations that the toxic chemicals used in the dissolving pulp production process have leached into the surrounding environment.
“TPL goes beyond legal compliance, which is reflected in achieving for the 6th year Green PROPER rating by the Indonesian Government,” Mitai said. 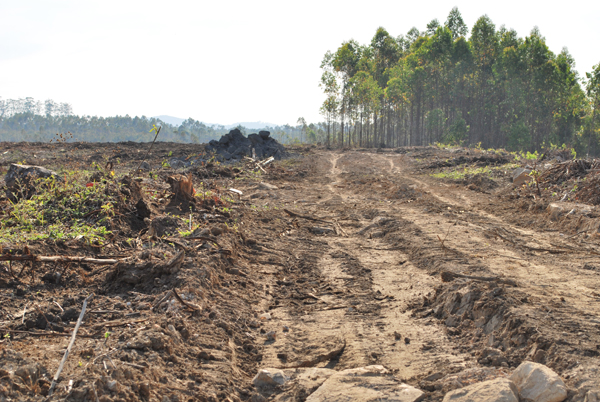 Mitai also disputes the 35 percent efficiency figure. “TPL has a policy of waste minimization and utilizes 100% of the eucalyptus fiber – why would a company spend money to grow a forest and only utilize 35%; [it] is not good business sense,” he said.

RAN’s Morgan concedes that TPL has made some improvements in its pulping technology, allowing the company to forego the use of organochlorines, for instance. But she stresses that does not let the company off the hook.

“TPL must take responsibility for the legacy of its use of toxics, violations of community rights, and destruction of the forest,” Morgan said. “TPL must now focus on ensuring that it is not violating the rights of the communities who live in and near their plantations, and must immediately halt the clearing of natural forest.”

Both RAN and Canopy have launched campaigns urging the fashion industry to adopt the necessary supply chain safeguards to ensure the dissolving pulp being made into clothing does not come from problematic suppliers like TPL.

Indonesia is a net importer of dissolving pulp due to its domestic textile industry, with431,432 tons imported in 2012, according to data from the Food and Agriculture Organization of the UN (FAO). But that could change if current trends hold.

Dissolving pulp is a good substitute for cotton, which is why production of DP took off from 2010 to 2011, when cotton prices went through the roof due to crop failures in Pakistan and India. But global production has gotten back on track, so much so that today the price of cotton is at a five-year low as concerns have grown that production is outpacing demand. 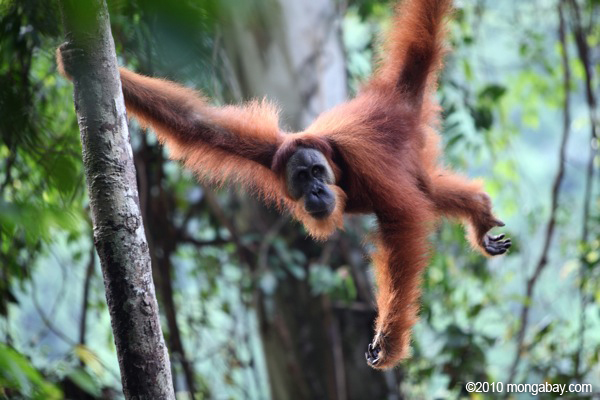 Sumatran orangutans (Pongo abelii) have declined heavily as their forest habitat has been cleared and replaced by plantations. Photo by Rhett A. Butler.

Indonesia lost two million hectares of tree cover in 2012 alone, per Global Forest Watch data. Of this, some 840,000 hectares was primary forest, according to a study by researchers at the University of Maryland, despite commitments by the Indonesian government and commodity companies to reduce deforestation.

North Sumatra, where TPL’s switch mill produces dissolving and paper pulp, has little intact forest left, with Global Forest Watch showing much of the province taken up by commodity concessions like wood fiber and oil palm plantations. Yet, the forests that still stand are home to many unique species, such as the critically endangered Sumatran orangutan (Pongo abelii), which has declined 80 percent in 75 years primarily due to massive clearing of the island’s forests. 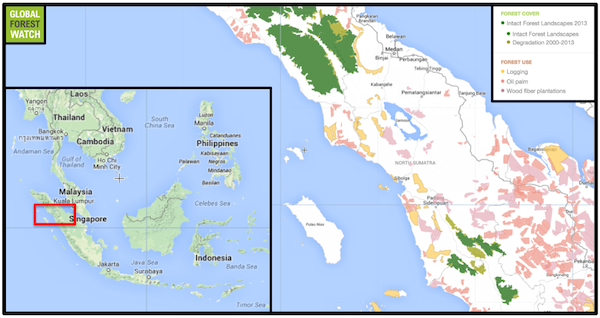 Large tracts of intact forest survive only at the northern and southern peripheries of North Sumatra, with those in the south heavily degraded since 2000. Map courtesy of Global Forest Watch. Click to enlarge.