Rediscovered in 2010, rare Indian frog surprises by breeding in bamboo 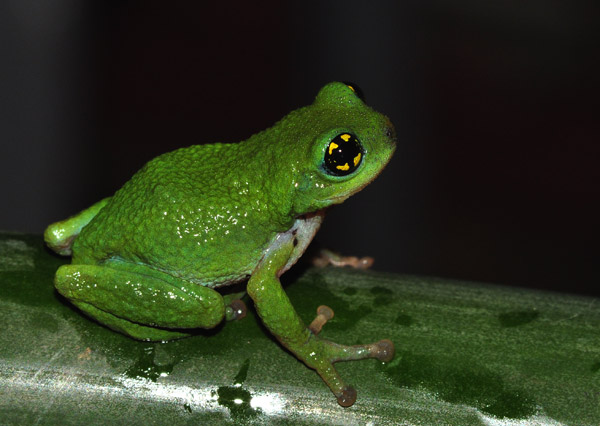 For a long time, this rare white spotted bush frog lived a secretive life: the Critically Endangered Chalazodes bubble-nest frog (Raorchestes chalazodes) was last seen in 1874 and presumed to be extinct. That is until 2010 when a
year-long expedition
to try and locate ‘lost’ amphibians in India found the elusive frog in the wet evergreen forests of the Western Ghats, after more than 130 years.

Now, Seshadri K.S., one of the discoverers, and his colleagues from the National University of Singapore (NUS) and the Indian Institute of Science in Bengaluru, India, have discovered an unusual breeding behavior in these frogs. The frogs breed inside hollow, living shoots of bamboo, and the fathers look after the eggs, which hatch directly into froglets. This mode of reproduction is the latest discovery of direct development in frogs, where they circumvent the water-requiring tadpole stage.

This was a serendipitous finding, said Seshadri, a doctoral candidate at NUS. A few years after the expedition, when researchers re-discovered the frog on a clump of bamboo in the forests of South India, Seshadri and his colleagues observed the tiny fluorescent-green frog with ash-blue thighs enter a living bamboo shoot through a narrow slit-like opening.

“After taking this footage, I went ‘Gosh! This is so awesome. If I do a PhD, I want to study this group of frogs,’” Seshadri told mongabay.com. “This opens up a plethora of questions in evolutionary ecology.”

Following this discovery, the team began examining openings on bamboo stems, and eventually found a few hiding frogs within. Between 2009 and 2012, the researchers cut open 20 bamboo stems to observe and photograph adult frogs and eggs inside. The adult male frogs were mostly docile, Seshadri said, and would try to hide or protect the eggs.

While the researchers do not have the frog’s mating strategy completely figured out yet, they have used bits of their observations to paint this picture: under the cover of dark, adult male frogs call out loudly from the bamboo to attract females. The adult male and female breed inside the bamboo, where the female then lays about five to eight eggs close to the slit or opening. The female leaves, and the male continues to care for its progeny, first for the eggs, and then for the tiny froglets that hatch out of them. 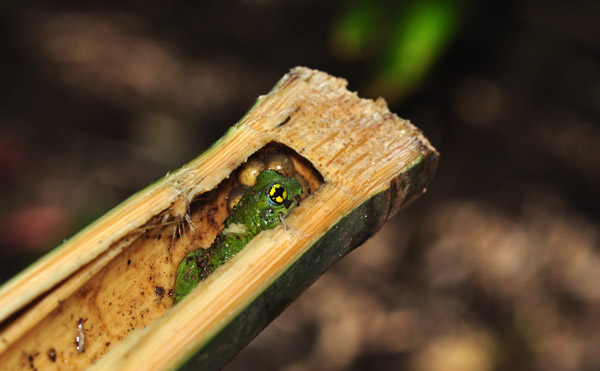 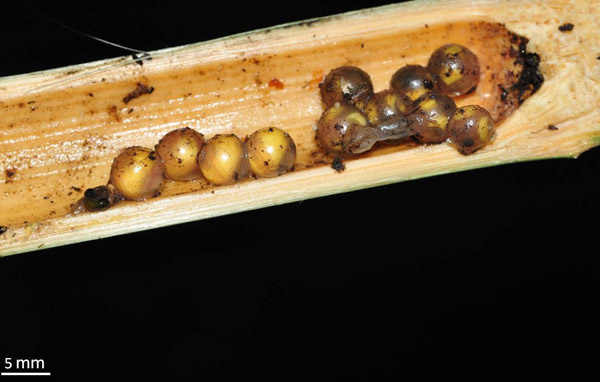 Another bush frog, the Olchandra reed frog (Raorchestes ochlandrae), also found in the Western Ghats, is the only other frog known to display similar breeding behavior. This frog was only discovered in 2007 and is currently listed as Data Deficient, since little is known about it.

“For now, it appears they both [species of frogs] follow the same mode of reproduction. The species of bamboo in which they breed, however, are different,” Seshadri said. “If we look harder and carry out extensive surveys, we might find many more species in this group of bush frogs.”

The discovery of this rare frog’s breeding behavior also highlights its vulnerability to extinction. Bamboo is a valuable resource for numerous industries. Harvesting bamboo during the frogs’ breeding season could have long lasting impacts on their population viability, according to Seshadri. 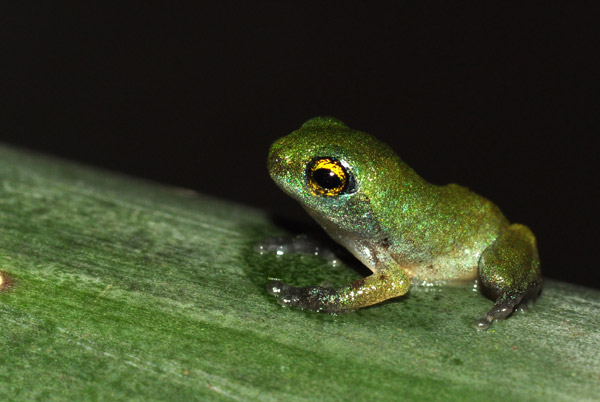 “The new study once again suggests that the diversity in reproductive modes of the Western Ghats frogs is still poorly known and that many such discoveries may be expected,” SD Biju, an amphibian expert from the University of Delhi not involved in this study, but one of the re-discoverers of the Chalazodes bubble-nest frog, told mongabay.com.

Scientists honor missing activist by naming a spider after him

(08/25/2014) Swiss researchers have honored the memory of a missing indigenous peoples activist by naming an undescribed species of spider after him, reports the Bruno Manser Fund, the group he founded.