Only place where rhinos, tigers, elephants, and orangutans coexist is under threat A forest that is the only place where rhinos, tigers, elephants, and orangutans coexist is under threat from planned infrastructure, mining, logging, and plantation projects, warns a new report from the Rainforest Action Network (RAN).

The report, issued Monday, looks at one of the last vestiges of wilderness on the island of Sumatra, which for the past three decades has been heavily ravaged by logging, fires, and conversion to industrial timber and oil palm plantations. This area, known as the Leuser Ecosystem, is today a battleground between business-as-usual interests seeking to mine its forests and a collection of conservationists, local communities, and a collection of companies seeking to steward its resources. RAN’s report details many of the threats to Leuser’s ecosystems, including a proposed zoning law that could open up large swathes of forest to deforestation, new road projects that could bisect protected areas, and ongoing encroachment by plantation developers and illegal loggers. RAN focuses specifically on industrial drivers of deforestation in the 2.6 million ha area, namely palm oil, mining, logging, and pulp plantations. It calls on the Indonesian government — both Indonesia’s central government and the Aceh government — to adopt measures that protect Leuser’s natural ecosystems.

“The Leuser Ecosystem is now an epicenter of palm oil plantation expansion and combined with unchecked mining, logging, industrial pulp plantations and poaching in the region, this vital ecosystem is facing a perfect storm of destruction,” states the report. “President Joko Widodo must uphold Indonesian national law and ensure that these protections remain in place for this global treasure. But the Indonesian government cannot secure the fate of this critical ecosystem alone. The fact is that in order to protect our precious remaining rainforests—in the Leuser Ecosystem and across the globe—and to respect the rights of Indigenous Peoples and rural communities we must fundamentally transform the way that palm oil is produced.” 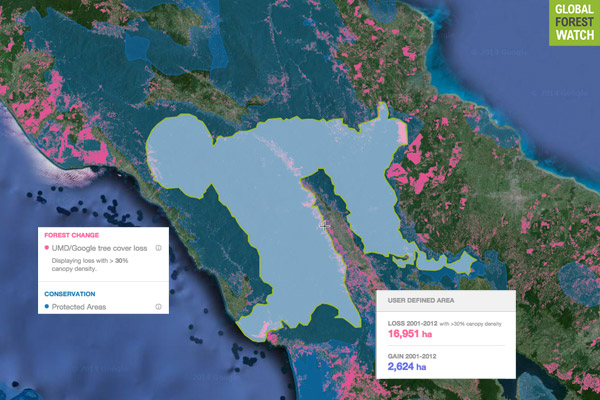 According to Global Forest Watch, the Leuser Ecosystem has lost roughly 200,000 hectares of tree cover since 2001, or about 8 percent of its forest. Gunung Leuser National Park (highlighted in the map above), one of the most well-protected parks in Indonesia and the anchor of the broader Leuser Ecosystem, lost only 17,000 hectares during that period. But much of the Leuser Ecosystem remains unprotected and could be auctioned off for mining and plantations if proposed changes to Aceh Province’s spatial plan move forward. Click to enlarge.

The report points to some companies that have established “zero-deforestation, zero-conflict” policies which aim to do just this. But it also lists more than two dozen plantations that have been established within the boundaries of the Leuser Ecosystem.

RAN says that some of the “conflict palm oil” produced within Leuser ends up in international markets, potentially posing a risk for companies that lack social and environmental safeguards in the sourcing policies.

“Palm oil growers, processors, traders, financiers, consumer goods manufacturers, the Indonesian and Aceh government and communities all have important roles to play in protecting the Leuser Ecosystem as the decisions they make will determine if this area is protected for future generations or opened up to new and destructive developments,” RAN says.

(10/14/2014) Oil palm company PT. Kallista Alam has filed an appeal with the Supreme Court continuing the closely-watched legal battle set to redefine Indonesia’s commitment to environmental justice. Lawyers for the company filed the new appeal on October 6, claiming the initial case is invalid because it failed to include all relevant parties as defendants—including the governor of Aceh, who issued the concession permit in 2011.

(09/17/2014) Activists have launched an urgent appeal calling upon outgoing Indonesian President Susilo Bambang Yudhoyono to step up protection of the only ecosystem that houses Sumatran orangutans, rhinos, elephants and tigers.

(08/22/2014) In the wake of massive fish die-offs and repeated calls from environmental groups to do more than just talk about the issue, the government of Aceh has called for the closure of all illegal gold mines throughout the province. Several members of the Regional Leadership Coordination Forum signed a written appeal for illegal miners to immediately stop

(08/11/2014) Oil palm plantations and other developments are threatening Rawa Singkil Wildlife Preserve—Aceh’s largest peat swamp, and home to the densest population of Sumatran orangutan in the Leuser Ecosystem. The lack of clear boundaries, and construction of roads bisecting the area has fostered encroachment by local and outside entrepreneurs, including some former local officials, reports Abu Hanifah Lubis, Program Manager of Yayasan Leuser Internasional (YLI).