by Morgan Erickson-Davis on 7 November 2014

With the world’s largest system of protected areas and a 70 percent drop in the deforestation rate of the Amazon over the past decade, Brazil has made huge strides in safeguarding what’s left of its wilderness. However, this progress now hangs in the balance, with new laws threatening to turn many of the country’s protected areas into mines and dams.

A report released today in Science details the impacts of the legislation, which is currently under debate by the Brazilian Congress. One proposal is calling for 10 percent of the country’s most stringently protected areas (PAs) to be developed for mining, which would affect an area the size of Switzerland encompassing national parks, biological reserves, and wildlife refuges. Brazil’s indigenous-held land would be even more impacted, with 281,000 square kilometers —an area bigger than the UK—at risk of mining development. Proposed hydroelectric dams stand to disturb downstream PAs, limiting the movement of aquatic species and flooding out terrestrial ones. A jaguar (Panthera onca) rises out of the Pantanal. Photo by Rhett A. Butler.

The proposals include plans for mitigating and reducing environmental damage from development. However, the authors of the report caution these plans do not go far enough to address the scope of impact.

“Our concern is that even if the proposed mitigation actions were put in place they are oversimplified because they fail to take account of the indirect effects of mega-projects,” said coauthor Dr. Luiz Aragão. “These projects can involve thousands of workers and lead to rapid local population growth. This, combined with new roads and access routes, is a recipe for the emergence of new deforestation frontiers.”

Brazil boasts more than 12 percent of the world’s PAs, with 17.6 percent of its land granted federal, state, or municipal protection. However, since 2008, Brazil had already reduced safeguards for 44,100 square kilometers of PAs to facilitate development, calling into question the efficacy of such “protection.”

Brazil has had great success in reducing deforestation in the past decade, effectively sparing 86,000 square kilometers of rainforest from the chainsaw and thereby preserving wildlife habitat and preventing the release of 3.2 billion tons of carbon dioxide emissions, according to a study published in Science earlier this year. However, while forest loss has been stymied in the country, it definitely has not been stopped. The state of Pará, for example, lost nearly 8.1 hectares—more than 7 percent—of its forests from 2001 through 2012, according to data from Global Forest Watch. This, despite an abundance of protected areas occupying almost half the state’s land area.

While most of Pará’s forest loss occurred outside its PAs, deforestation happened within them in several places. For instance, Global Forest Watch shows the Triunfo do Xingu Environmental Protection Area in the middle of the state experienced more than 361,000 hectares of deforestation from 2001 through 2012.

Most of Brazil’s protected areas occur in the northern part of the country, in and around the Amazon Basin. Map courtesy of Global Forest Watch. Click to enlarge. 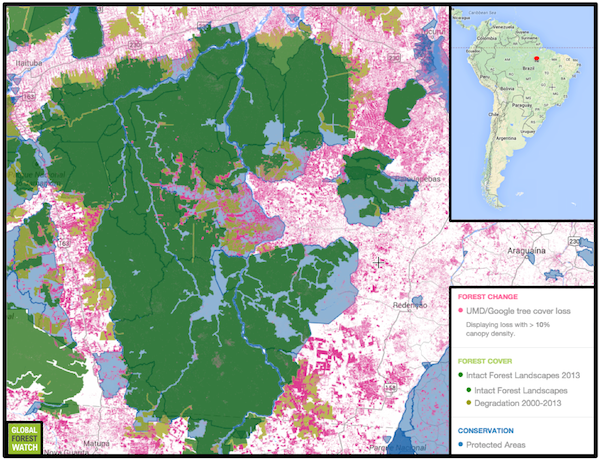 Para, which borders the Amazon River at its northern periphery, lost almost 8.1 million hectares of forest cover from 2001 through 2012. Intact forest has also been degraded since 2000, even in official protected areas. Map courtesy of Global Forest Watch. Click to enlarge.

Triunfo do Xingo, a protected area in Para (indicated by yellow arrow) is pockmarked with tracts of cleared land. Image courtesy of Global Forest Watch. Click to enlarge.

In addition to threatening its own biodiversity and resources, the authors of the report worry Brazil’s PA reductions may have global repercussions.

“Beyond the conservation and stewardship of its own biodiversity and environmental resources, so vital to the wellbeing of its citizens, Brazil plays a vital role in motivating and supporting the adoption of more sustainable development trajectories around the world,” said coauthor Toby Gardner. “Yet this standing is now in jeopardy.”

The population of Brazil nearly quadrupled in 60 years, from 54 million in 1950 to 195 million in 2010. Balancing the needs of a growing human populace with those of the environment can be a tricky issue, one the authors of the report say Brazil’s government should address more thoughtfully.

“The purpose of this analysis is not to say that Brazil´s development should not benefit from its abundant natural resources,” said Dr. Joice Ferreira, lead author of the report, “but that we should not squander our hard-won record of success and leadership in favor of fast-tracked and poorly planned development projects that leave a long legacy of environmental damage.

“It is possible to manage our development in a more sustainable way.”