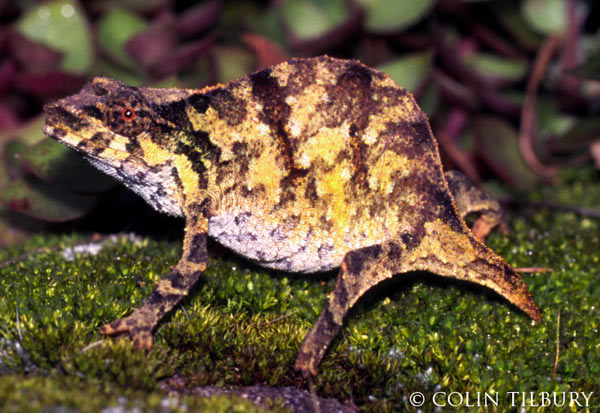 A female Chapman’s pygmy chameleon (Rhampholeon chapmanorum<). Scientists fear the species may be extinct, but only a field expedition will tell. Photo by: Colin Tilbury.

In just two forest patches may dwell a tiny, little-known chameleon that researchers have dubbed the world’s most endangered. Chapman’s pygmy chameleon (Rhampholeon chapmanorum) from Malawi hasn’t been seen in 16 years. In that time, its habitat has been whittled down to an area about the size of just 100 American football fields. Given this, scientists are now scrambling to raise funds to conduct an expedition to its last stand, Malawi Hill, to determine if Chapman’s pygmy chameleon still survives.

“The assessment of [Chapman’s pygmy chameleon] shed light on the fact that this species has not been observed in over 15 years and that its habitat has been reduced to approximately 0.6 square kilometers of remaining uncleared forest!” Christopher V. Anderson with Brown University and a member of the CSG told mongabay.com. “This remaining habitat is divided into two small fragments that are approximately 1.7 kilometers apart.”

The researchers used satellite images to see how the chameleon’s forest has been cut down for agriculture and fuel wood during the last couple decades, identifying two forest patches where the species may still hang on.

“Given the limited remaining habitat and the intense pressure on these forest patches as potential agricultural land by the surrounding community, we felt that this chameleon species was in the most extreme risk of extinction,” said Anderson.

The district of Nsanje, where the chameleon lives, has seen high forest loss in the last decade. According to the Global Forest Watch, Nsanje lost 1,715 hectares out of 30,000 hectares of tree cover from 2001 to 2012. This means tree cover in the district dropped 5.7 percent during the same time period.

Nsanje is one of the poorest districts in Malawi, which is already numbered among one of the least-developed countries in the world and one of the most densely-populated. Around eighty percent of people work in agriculture in the East African country and researchers believe the chameleon’s forests are being largely cut for small-scale agriculture.

Chapman’s pygmy chameleon is largely a ground-dwelling animal, climbing into low bushes at night. Not much is known about the species, which was only discovered in 1992. 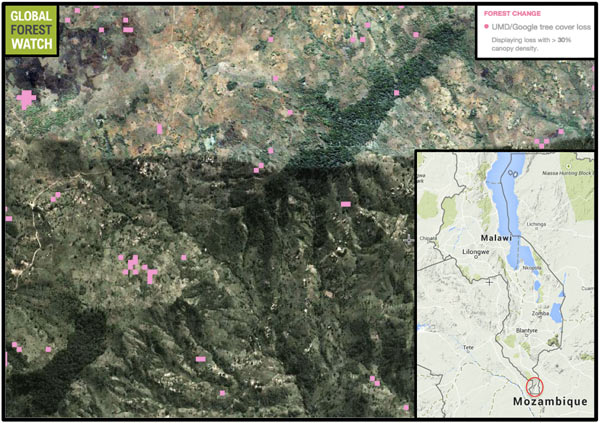 The two forest patches in Malawi that may still be home to Chapman’s pygmy chameleon: the bigger near the top right, the smaller near the bottom left. Pink blocks show forest loss from 2001-2012 when analyzing tree cover at 30 percent. Image courtesy of Global Forest Watch. Click to enlarge.

“Chapman’s pygmy chameleon is a relatively small species with a body type that allows it to mimic leaves,” Anderson told mongabay.com. “These species forage in leaf litter during the day, and by night perch in trees and bushes to sleep…Chapman’s pygmy chameleon also is known to produce a low frequency sound vibration, which is perceived as a ‘buzzing’ and it transmitted through the twigs and other substrates they sit on. These vibrations are used as a means of communicating with each other, particularly during courtship and territorial displays, and possibly also for startling predators.”

“While most leaf mimics perch fairly close to the ground at night, Chapman’s pygmy chameleon tends to perch higher on average than other similar species. As a result, it is unlikely that forest patches with open canopy and those that lack a forest floor would be able to sustain the species,” Anderson said, who added that “unfortunately it is possible that Chapman’s pygmy chameleon is already extinct. Given just how small we estimate the remaining uncleared forest patches to be, it is entirely possible that these fragments have lost ecological function and are too small to support populations.”

Still, Anderson and his colleagues haven’t given up hope. They are currently raising funds through the crowdsource website, RocketHub, to conduct an expedition to Malawi Hill to see if they can find any Chapman’s pygmy chameleons still hiding out in the leaf litter, still clinging to a branch—and existence.

“The IUCN/SSC Chameleon Specialist Group is a small group of experts from around the world who volunteer their time, energy and expertise to the conservation of chameleons,” Anderson said. “Our activities are not funded, so we are holding a fundraiser to enable us to send a small team of experts to Malawi in search of this species.” 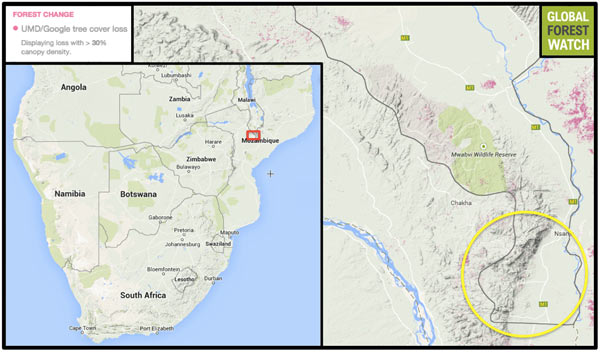 Nsanje District has lost around 5.7 percent of its forest cover from 2001-2012 when analyzing 30 percent tree cover. The pink shows forest loss. Image courtesy of Global Forest Watch.Click to enlarge.

If the money is raised, Anderson says the “team will conduct a survey of the remaining habitat to determine if the species still survives there, and if the forest is healthy enough to support the population. The team will also survey nearby healthy forests to determine whether any of these areas may be suitable relocation sites.”

Depending on what they find, the conservationists will come up with a set of recommendations which could include reforestation efforts of the degraded forests; translocating the chameleons to nearby, more-intact forests; or even captive breeding if that’s determined to be the only way to keep the species from oblivion.

The plight of Chapman’s pygmy chameleon is reminiscent of a number of the world’s less high-profile endangered species. For many threatened species, there is so little targeted research (and so little funding) that scientists aren’t even sure the true status of the species. Such species live in the scientific haze between endangered and possibly extinct. The lucky ones will be re-discovered and, hopefully, saved, but many have vanished without a fight. Hopefully, that will not be the case for Chapman’s pygmy chameleon.

(08/04/2014) As of this year, scientists have named and described over 10,000 reptiles, marking a new milestone in cataloging one of the most diverse vertebrate groups. Last week, the Reptile Database, an online catalog of all the world’s living reptiles, announced it had passed 10,000 species.