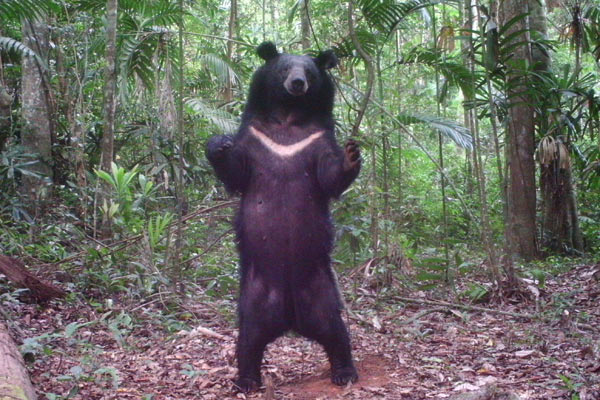 The Asian black bear (Ursus thibetanus), also known as the moon bear, is a key seed dispersal species for Miliusa horsfieldii and other trees in Thailand. This individual was caught on a camera trap. A new study finds that when species like these are hunted out, tropical trees face extinction. Photo by: Dusit Ngoprasert, Conservation Ecology Program, King Mongkut’s University of Technology Thonburi.

A new paper confirms what ecologists have long feared: hunting birds and mammals drastically raises the risk of extinction for tropical trees. Following the long-lifespan of a single canopy tree, Miliusa horsfieldii, researchers discovered that overhunting of animals could increase the chances of extinction for the species fourteen times over a century, from 0.5 percent to seven percent.

“Our study is the first to quantify the decades-long effects of animal seed dispersal across the entire tree life cycle, from seeds to seedlings to adult trees,” said co-author Jeremy Lichstein with the University of Florida.

But how could hunting birds and mammals impact trees? The vast majority of trees in rainforests are not dispersed by wind, like those in temperate areas, but by animals, which eat the fruit and spread the seeds far-and-wide when they defecate. These “seed dispersers,” as they are known, include a wide-variety of species from birds to bats to bigger mammals like monkeys, civet cats, bears, and even rhinos and elephants. In fact, some tree species in the tropics depend on just a few animal species for dispersal. Given this, scientists have long suspected that overhunting of mammals and birds would lead to a decline in some tree populations.

“Past studies have mostly shown short-term effects of hunting on communities of small trees and seedlings,” lead author Trevor Caughlin, also with the University of Florida, told mongabay.com. “Many of these studies reveal a shift in species composition in hunted areas from tree species that are dispersed by animals to tree species that are wind-dispersed. What’s been missing is a way to predict the long-term consequences of these changes for tropical forests.” 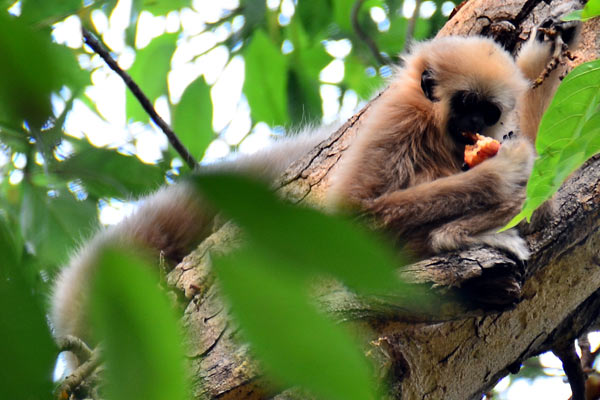 While some research had even predicted little impact on tree populations over the longterm, Caughlin’s paper, published today in the Proceedings of the Royal Society B, finds the opposite. In order to determine this, Caughlin and his colleagues looked at 15 years of data from populations of Miliusa horsfieldii in Huai Kha Khaeng Wildlife Sanctuary, a protected area in Thailand which is still home to many seed dispersing animals. The team focused on something called “negative density dependence,” or NDD, which basically means that seeds spread further from the parent tree—by a mammal or bird—fare better than those that fall and grow up near the parent tree.

Working in the park for three years—and armed with 15 years of data—Caughlin found that when Miliusa horsfieldii were crowded-in by others of their own kind, they faced increased challenges, and not just at the beginning of life. This crowding has “long term effects that go far beyond the seed stage to affect survival of seedlings, saplings and adults,” explained Caughlin, including reducing seedling and tree growth. Ultimately, tree survival suffered.

“Studying all life stages in a tree is important due to the long, complex life cycle of a tree,” noted Caughlin. “A single tree can live for hundreds of years and produce hundreds of thousands of seeds, most of which will die long before reaching adulthood. Yet, trees only move a single time during their entire life cycle: during seed dispersal. Understanding the importance of seed dispersal for tree population requires measuring the importance of the spatial pattern established by seed dispersal for all life stages.”

Once the team had established how crowding impacted the species, they modeled how this would decrease longterm survival in an environment where seed dispersers had been hunted out. This isn’t a theoretical scenario: many forests in the tropics have become known as “empty forests” where even though trees are standing, nearly all medium and large-bodied birds and mammals have been wiped out by relentless hunting and trapping. No-where is the problem more severe than in Southeast Asia where the study took place. The computer model found that extinction became 14 times more likely for Miliusa horsfieldii when its seed dispersers were killed off.

While the study focused on a single canopy tree, Caughlin said he expected results to be similar for other animal-dispersed tree species in the region. 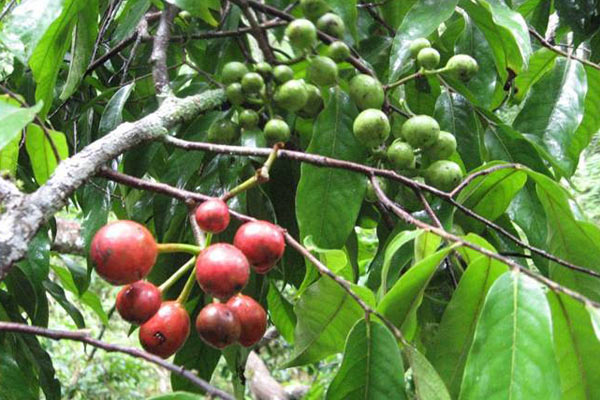 The cherry-sized fruits of the Miliusa tree in Thailand, are eaten by several species of large mammal, including bears, primates and civet cats. Photo by: Trevor Caughlin, University of Florida.

“Many studies have shown that effects of crowding (NDD) are pervasive across tree species, and the majority of tropical trees are dispersed by animals,” he told mongabay.com. Though he also added that more research is needed on the interplay between seed-dispersers and seed predators—those species that destroy seeds when they eat them.

“Tropical plant-animal interactions are complex and we are just beginning to understand how these interactions translate into long-term changes for tree populations. For example, overhunting of seed dispersing animals and overhunting of seed predators and herbivores (like deer and peccaries) often occur simultaneously. In these cases, the loss of seed predators may compensate for the loss of dispersal and buffer the tree population from extinction. Nevertheless, it is increasingly clear that loss of animal seed dispersal will change the composition and structure of tropical forests.”

Tropical biologist, Richard Corlett, who is a well-known expert on hunting and seed dispersal in the Southeast Asia, said the study “fills in a major gap” on the implications of overhunting.

“We knew hunting was bad, but we were not sure why it was bad, and therefore could not predict the longterm impacts. Now we know it is really, really bad and will get worse. The message that ‘guns kill trees too’ should help put overhunting at the top of the conservation agenda, where it deserves to be,” added Corllet, who was not involved in the study but is currently the director of the Center for Integrative Conservation at the Xishuangbanna Tropical Botanical Gardens in Yunnan, China.

Caughlin said the message for policy-makers was simple.

“Unless steps are taken to reduce hunting pressure on animal seed dispersers, the integrity of tropical forests is at risk,” he noted, adding that “the threat of overhunting to tropical forests is particularly worrisome, because overhunting could degrade even forests that are protected from logging, fire and other disturbances. And if animal-dispersed trees decline, we risk losing valuable ecosystem services, including carbon storage, biodiversity, and wild populations of important commercial tree species.” Bird bushmeat for sale in Laos. Photo by: Rhett A. Butler. 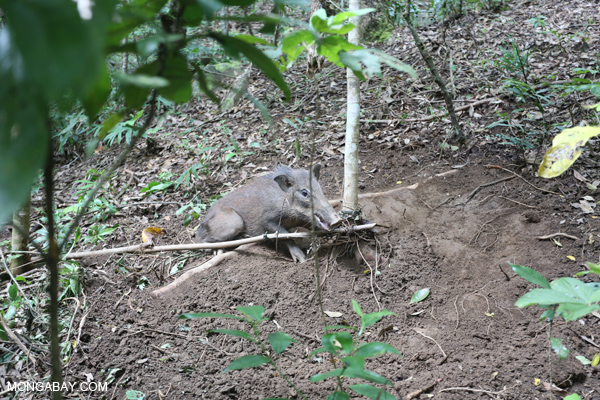 Wild boar (Sus scrofa) trapped in a snare in Aceh province on Sumatra. Boar are seed predators, not seed dispersers, but play a vital role in a forest’s ecology. Photo by: Rhett A. Butler.

(09/29/2014) Tropical forest restoration projects are exciting research sites for scientists studying factors that affect ecosystem recovery. Here, scientists are trying to understand plant community succession, i.e. the process of recovery after cleared lands are abandoned and allowed to regrow naturally. One of the most important components of this recovery process is seed dispersal, since seeds from nearby forests allow a deforested habitat to become populated again by native plants and trees.

(04/21/2014) The barbecued leg of a spider monkey might not be your idea of a sumptuous dinner, but to the Matsés or one of the fifteen tribes in voluntary isolation in Peru, it is the result of a successful hunt and a proud moment for the hunter’s family. However, a spider monkey tends to have only a single infant once every 30 months, which necessarily limits the number of adult monkeys available to subsistence hunters.

Ants plant rainforests, one seed at a time

(04/14/2014) Deforestation is destroying forests around the world, but its effects are especially obvious in the Amazon Basin. Due to cattle ranching, soybean farming, logging, and slash-and-burn agriculture, the rainforest is disappearing at a rapid pace. But a recent study published in the Journal of Ecology offers a unique solution to replanting the deforested landscapes: ants.

Scientists discover that even crocs have a fetish for fruit

(09/10/2013) It is hard to reconcile visions of a sharp-toothed, scaly, and ferocious crocodile with anything other than a completely carnivorous diet. We have been bombarded with gory kill scenes in which crocodiles take down everything from impala to buffalo, but new evidence suggests we need to rethink crocodilians altogether.