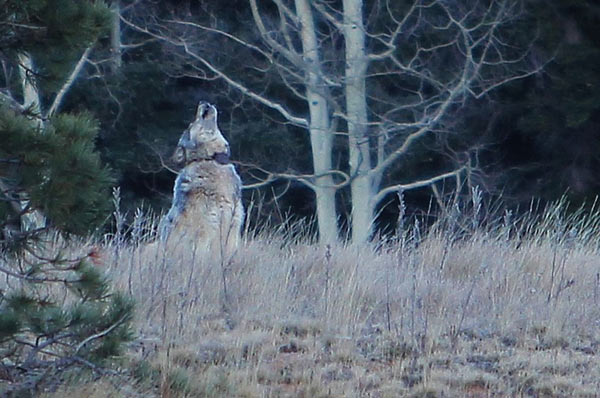 A photo of what is believed to be a gray wolf sporting an inactive radio collar in forests just north of the Grand Canyon. Photo courtesy of the Arizona Game and Fish Department.

For an update on this story: Feds confirm first wolf in the Grand Canyon area shot dead

Over 70 years since the last gray wolf (Canis lupus) was killed in Grand Canyon National Park, the top predator may be back. Tourists have reported numerous sightings—and taken photos—of a wolf-like animal roaming federal forest land just north of the park. Agents with the U.S. Fish and Wildlife Service now intend to capture the animal to determine if it is indeed a wolf or perhaps a wolf-dog hybrid.

The news of the possible wolf was leaked by an NGO, the Center for Biological Diversity, in an effort to save the animal from hunters who might mistake it for a coyote, according to Reuters. This already occurred earlier this year: the first wolf to return to Iowa after a 89-year absence was quickly shot dead by a hunter who thought it was a coyote.

Gray wolves are currently protected by the Endangered Species Act in Arizona and most other states, but were removed by a legislative rider in 2011 from several wolf-range states where hunting and trapping now kills hundreds of wolves annually. Still, the Obama Administration is currently proposing lifting all protections for the gray wolf (the Mexican wolf subspecies would remain protected) even in states where the animal has to yet to return.

“This wolf’s journey starkly highlights the fact that wolf recovery is still in its infancy and that these important and magnificent animals continue to need Endangered Species Act protections,” said Michael Robinson with the Center for Biological Diversity.

If the mystery animal turns out to be a wolf, it would have roamed hundreds of miles from the northern Rockies. In fact, observers believe the wolf is wearing an inactive radio collar placed on it by scientists in one of the Rocky Mountain states.

In the 20th Century, gray wolves almost vanished entirely from the lower 48 states—though a major population survived in northern Minnesota—until the 1970s and 1980s when wolves migrated into Glacier National Park in Montana from Canada. In the 1990s, scientists reintroduced wolves back into Yellowstone National Park in an ambitious effort to bring the big predator back. The program was a major success: today wolves have roamed as far afield as Washington, Oregon, and California to the west and Michigan to the east. The gray wolf is a wide-dispersing species as non-dominant pack animals roam thousands of miles to find mates and set up their own packs.

Decades of research on the return of gray wolves have shown that the animals—as top predators—play a huge role in restoring ecosystems. When wolves returned to Yellowstone they pushed elk into hiding. Dubbed the “ecology of fear,” whereby the presence of a predator changes its prey’s behavior, led to forests beginning to grow in areas which had long been over-grazed. New trees meant a rise in biodiversity, including more songbirds and a return of the beaver. Research in Canada has found similar results. Instead of being a big, bad wolf, it turns out these top dogs are vital to biodiversity, forest health, and environmental productivity.

(05/12/2014) DNA testing has confirmed that an animal shot in February in Iowa’s Buchanan County was in fact a wolf, according to the Iowa Department of Natural Resources. This is the first confirmed gray wolf (Canis lupus) in the U.S. state since 1925.

(01/28/2014) Hunters and trappers have killed 2,567 gray wolves in the U.S.’s lower 48 states since 2011, according to recent data. Gray wolves (Canis lupus) were protected by the Endangered Species Act (ESA) for nearly 40 years before being stripped of their protection status by a legislative rider in 2011. Last year total wolf populations were estimated at over 6,000 in the region.