Editor’s note: shortly after posting, PepsiCo’s response to the campaign was added to this story. 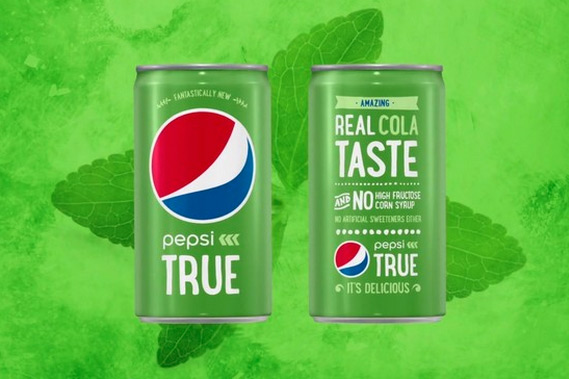 A campaign launched by environmental activists is killing Pepsi’s launch of a new product on Amazon.com.

Pepsi True, a new soda that is made from cane sugar and Stevia, a natural no calorie sweetener, launched yesterday to much fanfare. Pepsi True is available exclusively on Amazon.

However environmentalists quickly hijacked the launch, hitting out at Pepsi over what they perceive as weak safeguards for sourcing palm oil. Consumers organized by the SumOfUs campaign, flooded Amazon.com with poor reviews, linking Pepsi to destruction of rainforests and alleged “modern slavery” — labor abuses — in Southeast Asia.

The outcry was so intense that Amazon temporarily removed the product within 24 hours of its much heralded launch. Pepsi True is now back on Amazon, with more than 2,600 reviews and a one-star average rating. 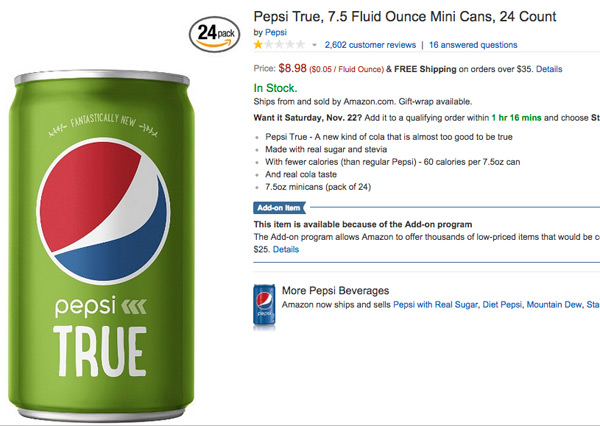 SumOfUs says that some 220,000 people have signed its petition calling on Pepsi to commit to a zero deforestation, zero social conflict sourcing policy for palm oil.

“Pepsi could be a leader in sustainability, could rise above its competitors and do the right thing, but instead it has relied on half measures and a commitment with gaps big enough to drive a bulldozer through,” said Kaytee Riek, Campaign Director at SumOfUs, in a statement. “When consumers can interact with brands in such an immediate and direct way, at least they’ll have to rethink their policies.”

A number of consumer products giants — including Unilever, Nestle, Mars, and Kellogg’s — and have recently adopted zero deforestation policies for palm oil. 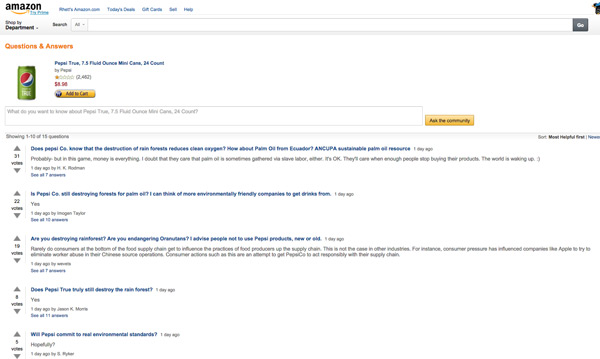 Pepsi did announce a zero deforestation commitment in May, but environmentalists said the commitment fell short of its peers. Before the SumOfUs campaign launched, Pepsi — which mostly uses palm oil in snack products under its Quaker and Frito-Lay brands — had been expected to roll out a comprehensive policy before the end of the year.

“PepsiCo is committed to realizing zero deforestation in our company-owned and -operated activities and supply chain by 2020,” the company said back in May.

In response to the new campaign, Pepsico was resolute in standing by its current policy.

“Pepsi True was subject to an orchestrated effort to post inaccurate information about our product and PepsiCo’s palm oil policy,” a PepsiCo spokesperson told Mongabay.com. “A few critics have repeatedly been both inaccurate and misleading about our commitments to traceable, sustainable palm oil. PepsiCo has committed to zero deforestation in our activities and sourcing and to 100% sustainable palm oil by 2015.”

“Our critics would be hard pressed to find many companies who have taken PepsiCo’s holistic approach to land policy, forest stewardship and responsible sourcing.”