The Western Ghats is one of the world’s eight richest biodiversity hotspots. A UNESCO World Heritage site, and also known as the Great Escarpment of India, the Ghats run parallel to India’s west coast. This great ecosystem is home to over 139 mammal species, nearly 50 of which are bats. And now scientists can add a new bat to this list: one that until now had only been documented from temperate regions.

`
“The Indian subspecies of the Eastern Barbastelle was an especially exciting find,” Claire Wordley, with the University of Leeds and the team’s leader researcher, said, adding that until now “this subspecies has only been reported from north India and Pakistan—in the temperate forest in the foothills of the Himalayas—2,000 kilometers [about 1,240 miles] from where we found it in the steamy rainforests of tropical south India. 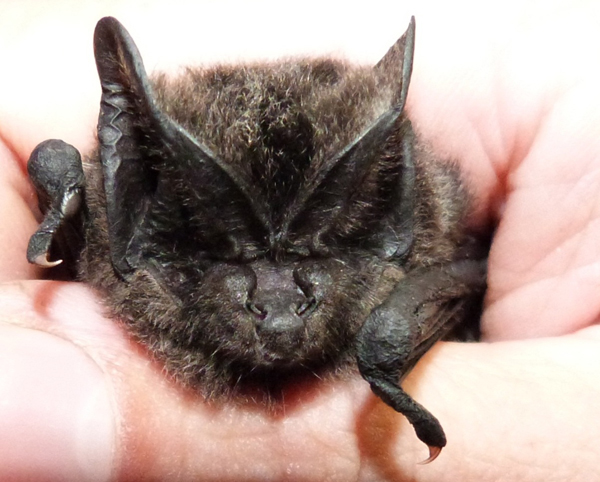 Wordley and her team from both the UK and India assembled a comprehensive call library of 15 bat species in the Western Ghats, including the Eastern barbastelle (Barbastella leucomelas). Publising their findings in Acta Chiropterologic, the team used a “full spectrum” bat detector which records high-frequency bat calls on a digital sound recorder. Using software to measure frequency, pitch, and length of all the bat calls, along with a spectrogram (a visualization of the call), the library has been published in hopes of aiding other bat researchers in southern India.

This call library is one of the first in India. Because catching bats with nets can be invasive and ineffective, and trying to spot them in their habitat is virtually impossible, a call library is the most effective method of study. The hope is to refine to software to automatically identify calls instead of relying on manual input, a process which Wordley calls, “a very time-consuming and occasionally somewhat tedious part of bat research.”

But the discovery of the Eastern barbastelle proved a real surprise for Wordley and her team.

`
“This underlines how much we have left to learn about bats in south Asia, and potentially provides a new conservation opportunity for the Eastern Barbastelle, which is never locally common and has thought to be at risk from war and deforestation across many parts of its range,” she said.

Moreover, the team recorded the calls of five bats that had never been recorded before.

“I became really interested in bats in this area as so little was known about them—it seemed like an amazing opportunity for research that could have real benefits for conservation,” Wordley told mongabay.com.

Of all the biodiversity hotspots, the Western Ghats is one of the most heavily populated, with over 93 percent of the land no longer remaining primary forest or grassland. The hope is that this new project will enable more bat researchers to map out habitats in the Western Ghats, so that more is known about these amazing creatures in this corner of the world.

“Working in the Western Ghats of India was thrilling, fascinating and occasionally infuriating. The bats in the area had not been extensively studied, so it was exciting to set up nets and traps every night and have no idea what we would catch. Every new species record for the area—and every new species call recorded—was a cause for great celebration, and more than made up for the nights where we all got wet, muddy and leech-bitten without catching any bats!” said Wordley. 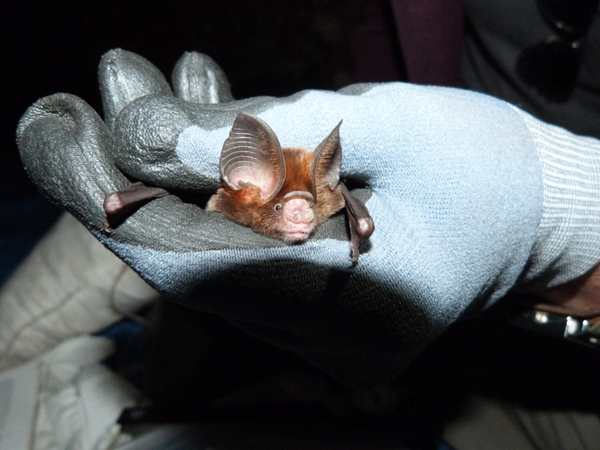 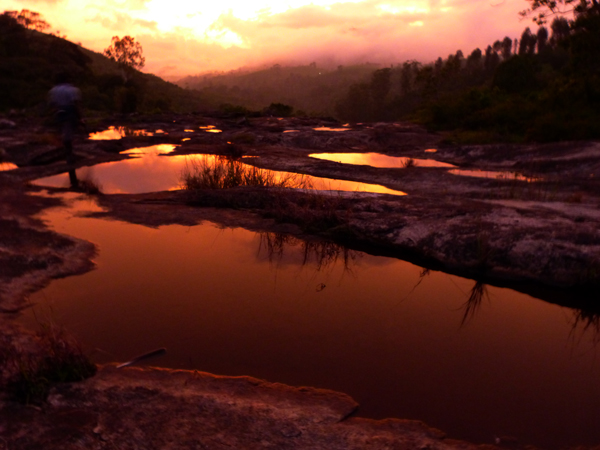 Bats are a crucial component of any ecosystem, and are often used as bio-indicators in tropical rainforest diversity. This means that the more bats, the healthier an ecosystem. Fruit-eating bats pollinate plants like bees do, while many bats hunt pests and disease-spreading bugs such as mosquitoes.

“The bizarre appearance of some bats puts many people off, but many of them change their mind when they discover how crucial bats are in ecosystems and in agriculture,” she said. “I really like seeing people gain a more positive attitude to these creatures usually after being told that they pollinate the agave used in making tequila!” 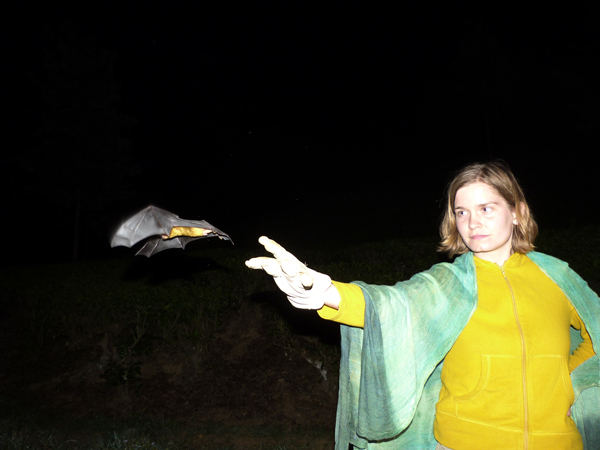 Vera Steinberg, a volunteer on the project, releases the Greater Asiatic Yellow House Bat Scotophilus heathii so its call can be recorded. The call of this species is published for the first time. Photo credit Claire Wordley 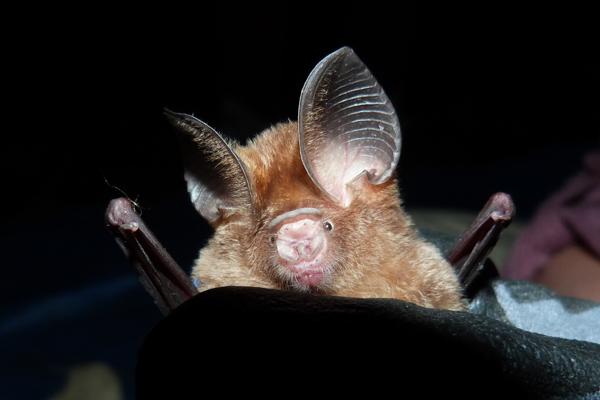 She added that bats “are really misunderstood and maligned creatures, often associated with witchcraft and devilry, but when you see them close up you can see how interesting and often delicately beautiful they are.” 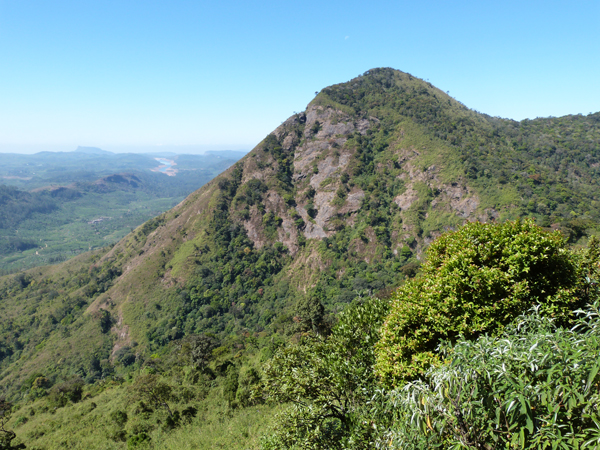 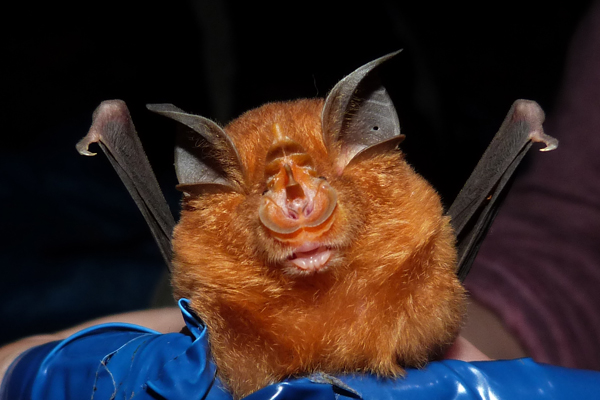 (09/29/2014) Tropical forest restoration projects are exciting research sites for scientists studying factors that affect ecosystem recovery. Here, scientists are trying to understand plant community succession, i.e. the process of recovery after cleared lands are abandoned and allowed to regrow naturally. One of the most important components of this recovery process is seed dispersal, since seeds from nearby forests allow a deforested habitat to become populated again by native plants and trees.

Fragmented forests hurt some bat species, may benefit others

(09/23/2014) Development of roads and other structures disturb large, continuous patches of habitat for wildlife. This habitat fragmentation is one of the biggest contributors to species extinction, as the local ecology and species interactions are altered. A new study finds that leaf-nosed bat abundances in Mexico are closely linked to how sensitive each species is to habitat fragmentation.

(07/29/2014) The world’s worst Ebola outbreak was likely begun by a hunter shooting a fruit bat for their dinner or the market, according to the UN. The outbreak has killed over 660 people in six months to date, and recently spread via plane to Nigeria. The disease is particularly deadly with a mortality rate of around 90 percent.