Joanna Alfaro Shigueto will be speaking at the Wildlife Conservation Network Expo in San Francisco on October 11th, 2014.

Marine conservationists often view fisheries as an enemy of sorts, vacuuming up fish with little thought to the long-term consequences and using equipment that also ends up killing other species, i.e. bycatch like sea turtles and marine birds. However, Joanna Alfaro Shigueto, the President of the Peruvian NGO ProDelphinus and winner of a 2012 Whitley Award, has chosen a different tact. Off the coast of Peru, she works closely with artisanal fishermen to lessen their bycatch and improve their lives through education.

“Many of the fishermen that we work with are the first to say that fish stocks in the Peruvian ocean have decreased,” she told mongabay.com. “Regardless, fishermen are uninformed of the degree of vulnerability each species has or how their actions affect the oceans when we consider how many artisanal fishermen work along the Peruvian coast. We hold workshops in different ports of Peru talking about endangered species, and how their fishing can be more sustainable.”

In addition to working with local communities, Shigueto and her group are conducting research into the long-hidden lives of many marine animals, including hugely vulnerable populations of sea turtles.

“Our tracking work helps us understand marine animals, and find answers to identify best conservation practices,” Shigueto said. “For example, knowing where nesting turtles travel after they have laid their eggs on the beach is great information. Knowing this could lead to understanding migration routes, and where protection areas should be located to maximize efforts.”

Joanna Alfaro Shigueto will be presenting at the up-coming Wildlife Conservation Network Expo in San Francisco on October 11th, 2014, an event which will be headed by Frank Pope and Dr. Iain Douglas-Hamilton of Save the Elephants. 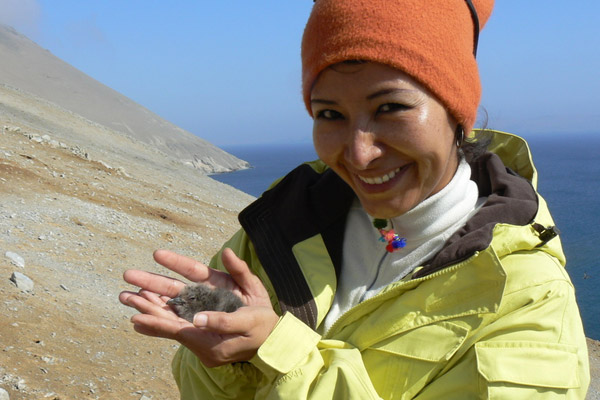 Mongabay: What led to your interest in the oceans?

Joanna Alfaro Shigueto: I was born in a big city, luckily Lima is located on the coast of Peru, so I had some contact with the ocean. But my main inspiration came from books, a dictionary with colorful plates of animals that my father brought home when we were young. At that time, we did not have Discovery Channel, or Nat Geo, we barely had black and white TV, and good reception if lucky. My dictionary lived right next to my bed. I wish I still had it to show to my kids now. Fortunately, the resources to get inspired by nature are wider now. It makes our work easier in a way. I hope more people also find their true inspiration in nature.

Mongabay: What species are currently most impacted by Peru’s fishing industry?

Joanna Alfaro Shigueto: Marine mammals, sea birds, and sea turtles are caught as bycatch. The Critically Endangered Pacific leatherback turtle is one of the species that is occasionally entangled as well as the hawksbill turtle. Seabirds, such as the pink-footed shearwater and the waved albatross, also interact with hooks from long lines.

Mongabay: How does helping fishermen to a better quality of life also help marine animals? 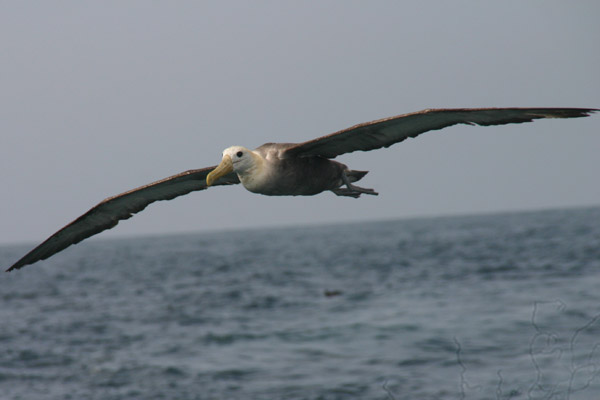 Marine birds, like this albatross, are common victims of fisheries. Photo by: ProDelphinus.

Joanna Alfaro Shigueto: Bycatch mitigation instruments such as pingers help fishermen by reducing the amount of fishing equipment they lose in entanglement, and the time they spend releasing the animal. Simultaneously, there is less bycatch.

If fishermen had more educational opportunities their livelihood would not depend so much on fishing activities. This in turn could mean less fishermen, less extraction, and less fishing pressure on marine animals.

Mongabay: In addition to bycatch, is overfishing also having an impact on Peru’s marine and coastal animals?

Joanna Alfaro Shigueto: Overfishing occurs and perhaps we are not aware of it yet. Luckily for the main fisheries in Peru, for anchovies, there are fishing quotas to help maintain the resources. However, target species such as hammerhead sharks and other shark species are under heavy fishing pressure. Although legislation for minimum landing sizes exists, it is not efficiently enforced. There are no moratoriums or maximum catches per vessel.

Mongabay: What role does education play when working with local fishermen?

Joanna Alfaro Shigueto: Many of the fishermen that we work with are the first to say that fish stocks in the Peruvian ocean have decreased. Regardless, fishermen are uninformed of the degree of vulnerability each species has or how their actions affect the oceans when we consider how many artisanal fishermen work along the Peruvian coast. We hold workshops in different ports of Peru talking about endangered species, and how their fishing can be more sustainable. This is important because to the fishermen will understand the importance of complying with legislation, or how important the reduction of bycatch is for the future of our ocean.

Mongabay: Will you tell us about your tracking research on sea turtles?

Joanna Alfaro Shigueto: Working with wildlife has several challenges, some of these include the difficulties of spotting them in their environment. For marine species this is particular true, mostly because humans are not quite equipped to spend long hours in a marine environment. This makes studying the life cycles of marine megafauna a bit difficult. Our tracking work helps us understand marine animals, and find answers to identify best conservation practices. For example, knowing where nesting turtles travel after they have laid their eggs on the beach is great information. Knowing this could lead to understanding migration routes, and where protection areas should be located to maximize efforts.

We have deployed satellite transmitters on the Critically Endangered leatherback sea turtle of the eastern Pacific, whose populations have decreased from thousands to the low hundreds in only a couple of decades. Also we have worked with hawksbill turtles, and have learned about their high fidelity to coastal areas, overlapping with coastal fisheries where our efforts will be focused in the coming years.

Mongabay: How receptive have Peruvian restaurants been to carrying sustainable seafood?

Joanna Alfaro Shigueto: All of the restaurants we have contacted have been located in Lima, and they have been very open to suggestions and working with sustainable seafood. Some have already changed their menus, using “catch of the day” instead of a specific species and have removed overexploited fish from their menu. They are interested in having sustainable food, but find it difficult to procure. 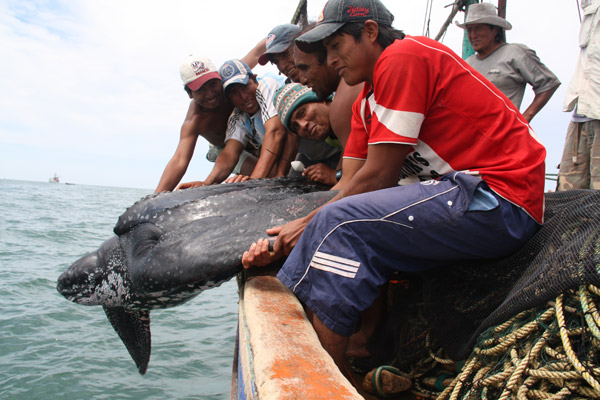 Releasing a leatherback sea turtle back in the sea. Photo by: ProDelphinus. 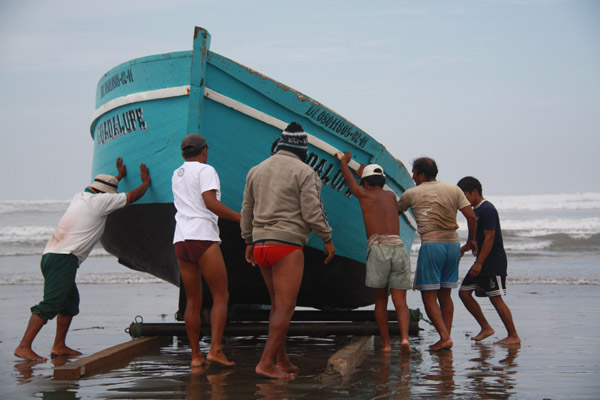 Artisinal fishing is the livelihood for thousands of Peruvians on the coast. Photo by: ProDelphinus.

(10/01/2014) Writing this from a hotel room in Indonesia’s second-largest city, Surabaya, I realize that I am filled with trepidation as I wait for the phone next to me to ring. When it does, the voice on the other end will tell me it’s go time; the culmination of many years of work towards ending the global trade in manta ray gills.