‘River wolves’ recover in Peruvian park, but still remain threatened inside and out (photos) 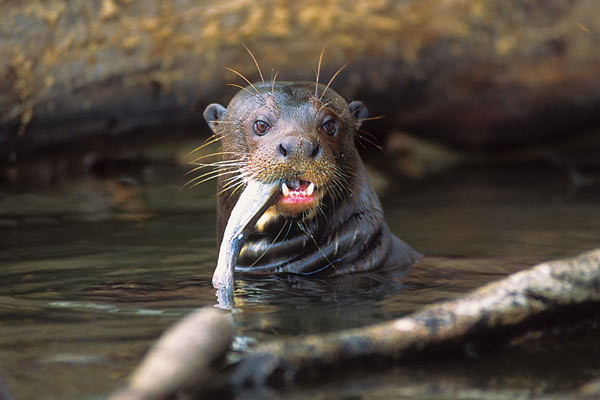 A giant river otter with a fish in its mouth. Photo by: Frank Hajek.

Lobo de río, or river wolf, is the very evocative Spanish name for one of the Amazon’s most spectacular mammals: the giant river otter (Pteronura brasiliensis). This highly intelligent, deeply social, and simply charming freshwater predator almost vanished entirely due to a relentless fur trade in the 20th Century. But decades after the trade in giant river otter pelts was outlawed, the species is making a comeback—at least in well-managed protected areas.

A new study in PLOS ONE finds that the species’ population has recovered to full capacity in most of its habitat in Manu National Park in Peru. The first year of the study, the survey area had 49 individuals, which dropped to a nadir of 42 in 1994. However, the population rose significantly after that: in 2004 it hit 88 individuals, before dropping to 81 in 2006, the last year of the study.

“When we initiated our study in 1991, it appears that the population in the floodplain of Manu National Park was still in a process of recovery from the impact of decades of hunting for the pelt trade,” lead author Jessica Groenendijk, the Education and Outreach Coordinator for Cocha Cashu Biological Station, told mongabay.com. She added that the current “results suggest a return to carrying capacity after the hunting decades, since the environmental capacity has not increased (the area has been protected since 1973 when the Park was established).”

Groenendijk says the species’ recovery is due to three measures. The first was that Peru banned commercial hunting of giant river otters in 1973 coupled with the CITES decision in 1975 to list the species as an Appendix I animal, essentially banning international trade. 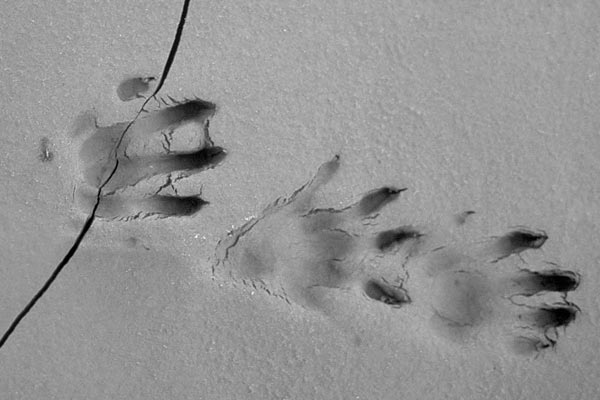 “Next came the establishment of large protected areas that contained remnant giant otter populations, including Manu,” said Groenendijk. “These areas, resulting from conservation and land use planning decisions at the national level, have been crucial in stabilizing populations.”

The study looked at the bulk of the giant river otters’ best habitat in the park, including all of the oxbow lakes, which are the otters’ favorite habitat. Groenendijk said the park’s total population of otters is probably around 100 to 130, comprised of about 22 family groups.

But even as the surveyed populations have seen a hopeful rise in this one area, it doesn’t mean the species is out of the woods yet. The giant river otter, the longest member of the Mustelidae family (even longer than marine otters), is currently listed as Endangered by the IUCN Red List. While the species is found north to the Guiana Shield and south to Brazil’s Pantanal, it remains hugely threatened by deforestation, overfishing, pollution, and disease. In all, the IUCN estimates that there are only 1,000-5,000 giant river otters left on the planet.

Groenendijk said that even in Manu National Park, the species is not safe from human activities. Manu National Park lies in Peru’s Madre de Dios, which has seen an influx of people working to exploit’s the area’s rich natural resources, such as gold and timber. 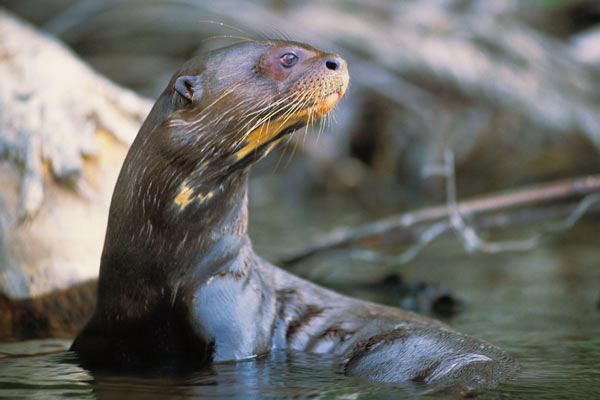 “The average rate of human population growth between 2002 and 2012 was 3 percent [in the Madre de Dios], the highest in the country. It is estimated that 40 percent of this population consists of recent immigrants attracted by land availability and job opportunities,” Groenendijk pointed out.

Given that giant river otters survive entirely on fish and live their whole lives in freshwater habitats, one of the most worrisome threats to the species; survival is mercury poisoning from an epidemic of gold mining in the region.

“The extent of gold mining in the Madre de Dios region increased from less than 10,000 hectares in 1999 to more than 50,000 hectares in 2012,” Groenendijk said, pointing to a recent study that found that “total mercury levels in 68 percent of fish muscles [in Peru] exceeded the tolerable level for the European otter (Lutra lutra) and 17.6 percent exceeded…the common standard for human consumption.”

Such a run for commodities has also taken a particular toll on the region’s giant river otter habitat.

“Thirty percent of riverine forests in Madre de Dios (this figure includes those in Protected Areas) have already been destroyed,” Groenendijk said. “If Protected Areas are excluded from the analysis, the situation is much worse.” 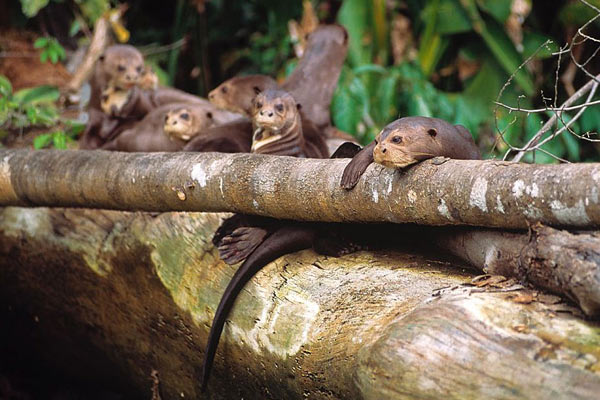 If we are to ensure a long-term future for giant river otters and maintain genetic diversity, Groenendijk said there needs to be a population of at least 500 individuals somewhere in its range. The Madre de Dios region may be the best bet, according to the conservationist.

“The Madre de Dios River itself, twice as wide as the Manu River, provides the highest quality habitat for the species; its large oxbow lakes and wetlands could support large giant otter groups with high reproductive output and, potentially, the largest sub-population of the watershed,” Groenendijk noted. “The Madre de Dios floodplain is also a natural corridor through which giant otters of the Manu, Los Amigos, Heath and other tributaries could disperse.”

In order to move the species behind recovery to safe, Groenendijk suggests the creation of “an aquatic habitat conservation corridor…along the Madre de Dios River,” adding that, “effective Protected Area design and broader wetland landscape management initiatives are therefore critical for the long term conservation of the species in Madre de Dios.” 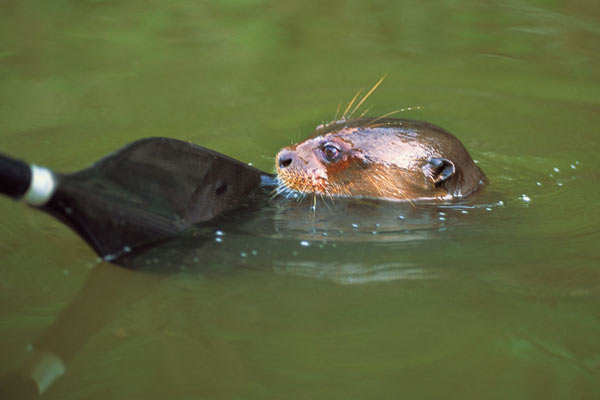 A young otter sniffing an oar. This individual is in the process of leaving his family on Cocha Salvador. Photo by: Frank Hajek. 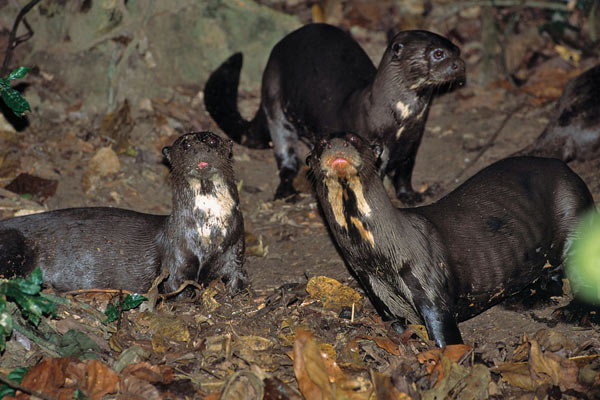 Otters on a latrine. Photo by: Frank Hajek. 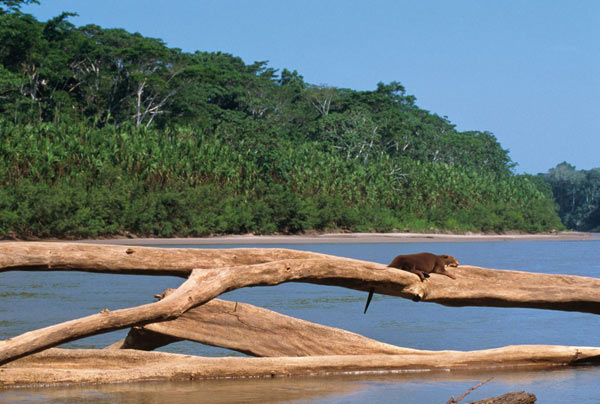 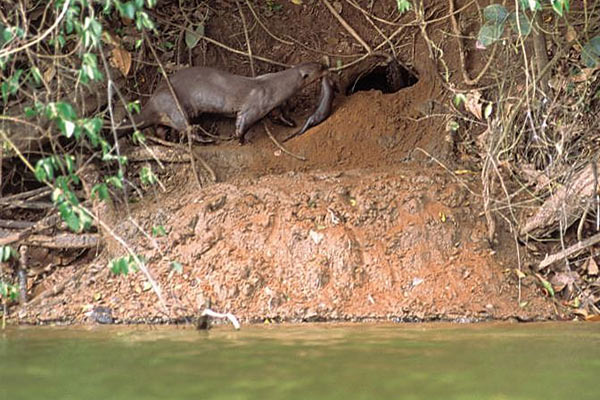 Giant river otter carrying a cub back to the den. Photo by: Frank Hajek. 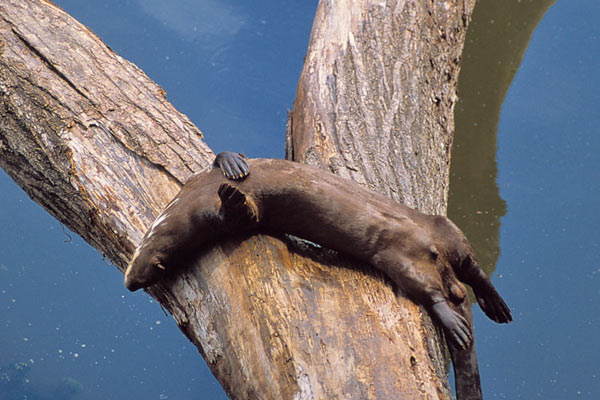 (01/30/2012) Charismatic, vocal, unpredictable, domestic, and playful are all adjectives that aptly describe the giant river otter (Pteronura brasiliensis), one of the Amazon’s most spectacular big mammals. As its name suggest, this otter is the longest member of the weasel family: from tip of the nose to tail’s end the otter can measure 6 feet (1.8 meters) long. Living in closely-knit family groups, sporting a complex range of behavior, and displaying almost human-like capricious moods, the giant river otter has captured a number of researchers and conservationists’ hearts, including Dutch conservationist Jessica Groenendijk.

(09/25/2014) Below one of the most famous archaeological sites in the world, scientists have made a remarkable discovery: a living cat-sized mammal that, until now, was only known from bones. The Machu Picchu arboreal chinchilla rat (Cuscomys oblativa) was first described from two enigmatic skulls discovered in Inca pottery sculpted 400 years ago.

(09/17/2014) Peruvian authorities have pulled more human remains from a remote river in the Amazon, which may belong to one of the four murdered Ashaninka natives killed on September 1st. It is believed the four Ashaninka men, including renowned leader Edwin Chota Valera, were assassinated for speaking up against illegal logging on their traditional lands.