Commentary by Paul Hilton on 1 October 2014

Writing this from a hotel room in Indonesia’s second-largest city, Surabaya, I realize that I am filled with trepidation as I wait for the phone next to me to ring. When it does, the voice on the other end will tell me it’s go time; the culmination of many years of work towards ending the global trade in manta ray gills.

Worth up to $30 million a year, this industry depends on the traders for its survival. Chief among them is a secretive local man I’ve been calling Mr. Big. Working alongside the Wildlife Conservation Society (WCS), Conservation International (CI), and the Indonesian authorities, we plan to make today his last day in business. 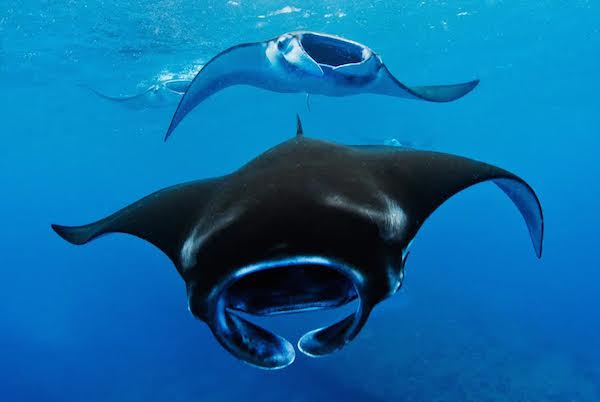 Like sharks, manta rays are cartilaginous fish. Unlike most sharks, their teeth are not sharp. Photo by Paul Hilton, Greenpeace.

Not much is known about Mr. Big, other than his standing in the industry, and that to take him out of the equation would be a major blow to it – not only internationally, but also in Indonesia, which passed laws in February 2014 protecting the manta species. Arresting him would mark the first time in this country’s history that anyone has been brought to justice in a case of marine conservation. It’s also proof of the determination of Indonesian authorities to stamp out the killing of one of the country’s most serene and majestic species; one that attracts $140 million dollars every year in global tourism.

The investigation has been arduous and lengthy. Even now, Mr. Big keeps changing our agreed location for the “sale” that’s about to take place. What was once a more open transaction of manta parts for money has now moved underground, thanks to the new legislation.

Although he appears furtive, Mr. Big was confident enough to tell us he currently has stock of 170 kilos of manta gills – the product of 24 animals – a number that is more alarming in the knowledge they produce a single pup just every three to five years. Our “buyer” has agreed to purchase 50 kilos for $144 per kilo, less than half its street value in China, home to the vast majority of manta gill consumers. Often believed to cleanse impurities from the system, there is actually nothing to suggest manta gills ever had a place in Chinese Traditional Medicine, nor scientific evidence that there are medical benefits to consuming them. 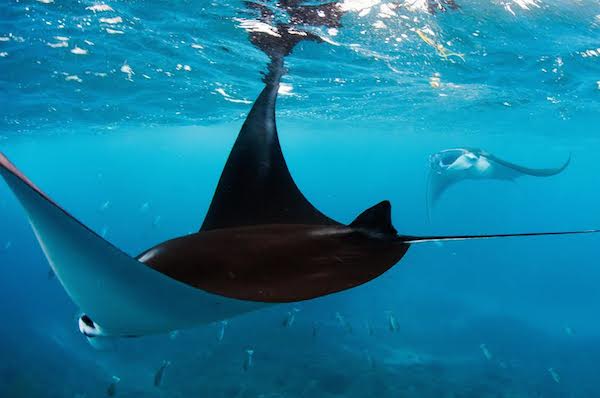 The giant oceanic (Manta birostris) and reef mantas ( Manta alfredi) are both listed as Vulnerable by the IUCN. Photo by Paul Hilton, Greenpeace.

Once today’s deal is done, I will be reporting as the authorities descend, netting one of the biggest fish in the global manta gill trade. Though the penalty for his activities is still unclear, we can be certain Mr. Big’s absence from the scene will be a significant shock to all those who make their living from this destructive and wasteful enterprise.

Finally, it’s go time. The team, comprising officers from The Ministry of Marine Affairs and Fisheries, the WCS, alongside plain clothed police officers and myself storm the warehouse, which is nestled among dried seafood stalls and nondescript from the outside, skillfully hiding the illegal activities taking place within its walls.

As we enter, the fisheries police present the ironically diminutive Mr. Big with a search warrant. He appears taken off guard and incredulous, looking on helplessly as authorities take only seconds to find the contraband in a back room. Fifty kilos of manta and mobula gills are strewn across the floor, 19.5 of which are from large oceanic manta rays. Aside from the sad and pointless loss of marine life, the impact for Indonesia is also economic, with each member of the species generating $1 million in tourism over its natural life. 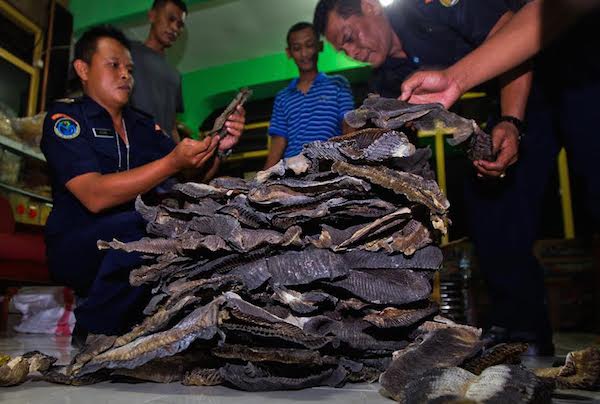 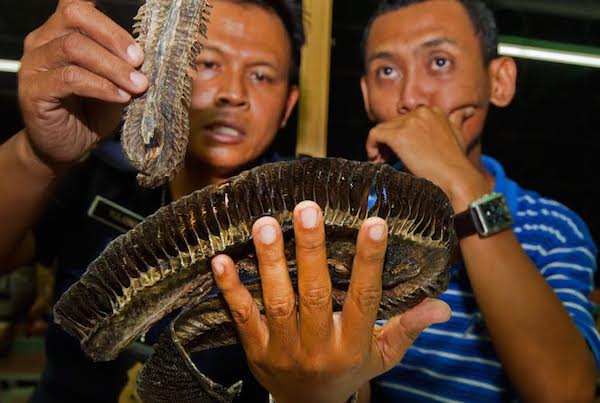 The new law protects only two species of manta ray: the oceanic (Manta birostris) and the reef manta ( Manta alfredi), both listed on the 2013 Convention on International Trade in Endangered Species (CITES), which helped Indonesia, as a signatory, execute the legislation.
However, at this stage, it excludes the mobula ray (genus Myliobatidae), a close cousin.

With the raid in full swing, fisheries police quickly get to work, separating the gills of the various species. In the process, they also uncover 13 kilos of dried turtle meat, another protected species. The surprise seizure possibly originates from the critically endangered hawksbill turtle, which inhabits the inshore reefs of Indonesia.

With the haul mounting, Mr. Big (who we’ve discovered is a local seafood restaurant owner named Suep, and one of Surabaya’s four leading manta traders) faces a maximum fine of $25,000 for the sale and possession of manta ray gills. There’s also a likely $10,000 fine for trading in turtle meat, as well as a possible prison sentence of five years.

A single kilo of large manta ray gills holds a street value in Surabaya of up to $175 per kilo, while a kilo of sea turtle meat can fetch around $40.

Under police questioning, Mr. Big claims he’s a sea cucumber trader, only receiving manta gills when requested, and pleading ignorance about the status of manta as a protected species in Indonesia. Interesting, since before the bust, he was only too happy to inform undercover agents that not only does he specialize in manta gills and turtle meat, he was abundantly aware that his activities were illegal.

Though our operation ultimately succeeded in its aim of capturing Mr. Big, the team couldn’t locate the other 120 kilos of stock he admitted to possessing. He did, however, reveal that the gills were coming from traders in Bali and East Java – yet more evidence of the continuing threat posed to oceanic species, and that our work to safeguard them must continue.

Mr. Big will appear in court in mid-October 2014, in Surabaya, Indonesia. 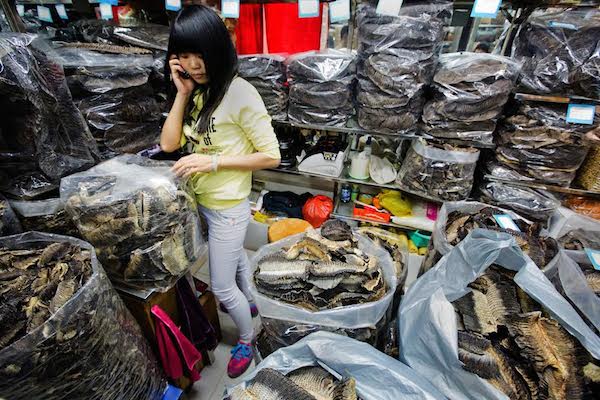 The gills and other manta parts are often sold in markets in China, where they are eaten for perceived medicinal purposes not supported with verifiable evidence. Photo by Paul Hilton, WildAid.

(09/05/2014) The population of blue whales in the Eastern Pacific has recovered to 97 percent of historic levels decades after Earth’s largest animal was nearly driven to extinction in some places due to the whaling industry, reports a new study published in the journal, Marine Mammal Science.

(08/27/2014) You may have recently read the controversial story on invasive lionfish research involving Dr. Zack Jud of Florida International University and a young girl named Lauren Arrington. While the issue of attribution in scientific research is crucial to the discipline, much of the media focus so far has sidestepped the real issue: what lionfish tolerance for brackish water really means for the environment.

Featured video: new Netflix documentary highlights the work of Sylvia Earle to save the oceans

(08/25/2014) Sylvia Earle is one of the ocean’s staunchest defenders. A National Geographic Society Explorer in Residence and former chief scientist with NOAA, Earle has spent a lifetime documenting the rapid decline of the world’s oceans and calling for more action to defend the body of water that cradles the world’s continents.

(08/11/2014) Eelgrass is an important part of many ocean ecosystems, but is disappearing due to human impacts. However, a study published recently in found eelgrass beds could benefit from a restoration technique using seed-filled pearl nets.