More than one million hectares allocated for conversion

Palm oil, a ubiquitous ingredient in supermarket products ranging from shampoos and cosmetics to processed foods, comes at a huge environmental cost. Between 1990 and 2010, palm oil monocultures replaced over 3.5 million hectares of forest in Malaysia, Indonesia and Papua New Guinea. This large scale deforestation has resulted in a massive loss of biodiversity and wildlife habitat, best illustrated perhaps by the annihilation of orangutan populations. Moreover, conversion of large peatlands to oil palm plantations releases millions of metric tons of CO2 into the atmosphere.

While Malaysia and Indonesia produce over 85 percent of the world’s palm oil, India is its largest importer. This push for import comes from a huge gap that exists between the demand and supply of edible oils in the country. In fact, over 65 percent of the country’s demand for edible oils was met by imports in 2013-14, with palm oil leading the way. Since the early 1990s, India’s palm oil imports have skyrocketed from about 100,000 to over 8.8 million metric tons in 2014. 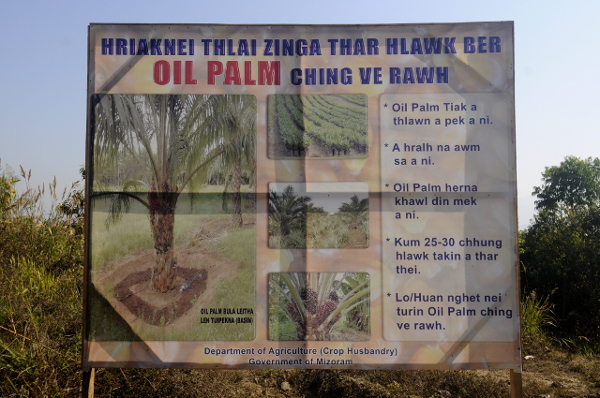 To reduce the demand and supply gap, India too has joined the bandwagon of oil palm cultivators. After all, oil palm is economically attractive for many reasons. The oil is very cheap, is the highest yielding vegetable oil crop, and has a variety of uses in consumer products. The Ministry of Agriculture estimates that India has the potential to cultivate oil palm in 1.03 million hectares of land–nearly the size of the U.S. state of Connecticut–and produce four to five million metric tons of palm oil per year.

In 1992, India launched the Oil Palm Development Program (OPDP) to expand land under palm oil cultivation in six Indian states. In 2004-05 the scheme was introduced in six more states, including those in northeast India – Mizoram, Tripura and Assam. But the growth of palm oil in the country has not been very rapid. To boost oil palm cultivation, the ministry introduced a Special Program on “Oil Palm Area Expansion” (OPAE) in 2011-12 aimed at increasing oil palm production in the 12 states from 50,000 to 300,000 metric tons in the next five years. For this, the OPAE has budgeted over $50 million (Rs 300 crore), mostly to be spent on special incentives for oil palm farmers in the form of subsidies on seeds, irrigation systems and processing units.

In recent years, the state of Mizoram in northeastern India has pushed hard for oil palm cultivation. But the seemingly lucrative oil palm may come with great socioeconomic and environmental consequences. 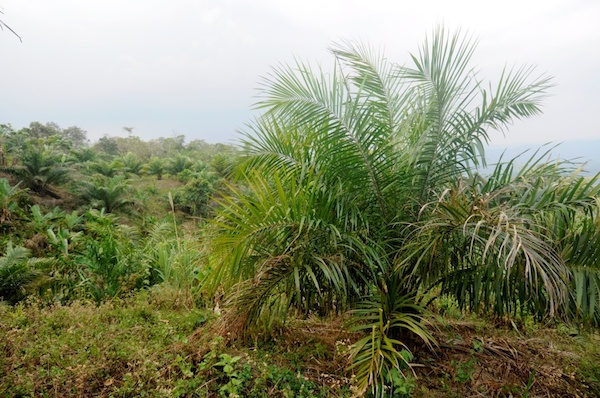 Palm oil and Jhum in Mizoram

In jhum cultivation, farmers burn down patches of bamboo forests to grow an assortment of food and cash crops without addition of any fertilizers or pesticides. After cultivation, they move to newer areas, allowing the older fields to rest and regenerate into forests. While the alternating cycles of forest clearance and regeneration makes it difficult to estimate the extent of deforestation in Mizoram, data from the Global Forest Watch puts the net loss of tree cover in the state at 20,000 hectares from 2001 through 2012—or about 1 percent of its nearly two million hectares of forest cover. 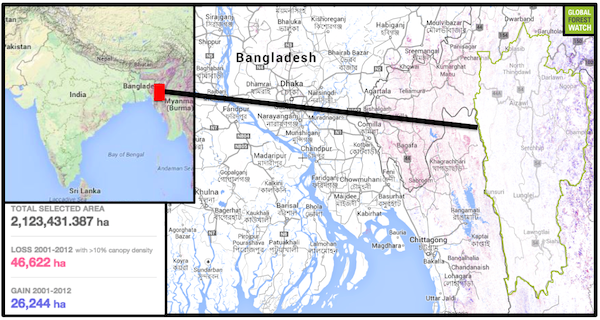 The Indian state of Mizoram lies in the far northeast of the country, between Bangladesh and Myanmar. From 2001 through 2012, it lost more than 46,000 hectares of forest cover, with growback estimated at about 26,000. Map courtesy of Global Forest Watch. Click to enlarge.

For many policy makers, (and some ecologists), jhum cultivation is destructive, leading to loss of forests, and low economic growth. Green cover provided by oil palm plantations instead appears to be a more acceptable and profitable alternative. But is jhum as bad as it is made out to be?

“One of the reasons [jhum is considered destructive] is that ecologists have always compared jhum (or logged, or fragmented forest) to a primary forest, and concluded that primary forest is better for biodiversity,” Umesh Srinivasan, a doctoral student at the National Center for Biological Sciences in Bangalore, India, told mongabay.com. “One of the fallouts has been that people tend to dismiss all non-primary forests as being ‘worthless’ and substitutable…. Oil palm might provide a permanent ‘green cover’, but then so does a lawn! In terms of sustaining biodiversity, this green cover fares quite poorly.”

In an article published in Economic and Political Weekly, Srinivasan and his colleagues added that jhum also facilitates cultivation of multiple crops organically, and provides a host of other benefits like bamboo, timber, firewood, and edible plant species – “a bounty that an oil palm plantation will never be able to match.” 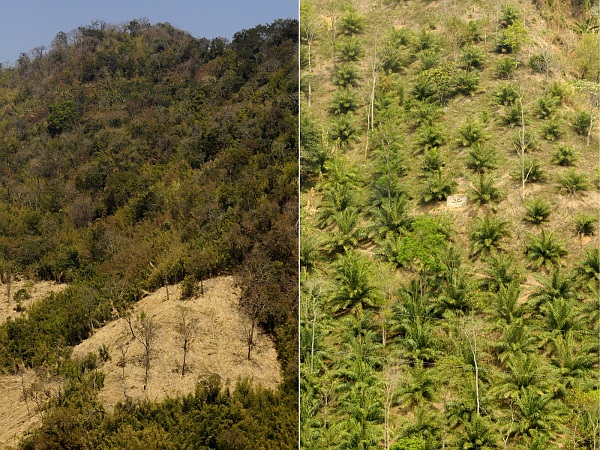 The jhum landscape mosaic of fields, regenerating fallows, and forests (on left) is a better form of land use than monoculture oil palm plantations (on right), according to many ecologists. Photo courtesy of TR Shankar Raman.

Shifting from jhum to oil palm plantations could thus undermine food security in the state. According to TR Shankar Raman, a wildlife scientist with the Nature Conservation Foundation in Mysore, India, who has worked in Mizoram, oil palm plantations are not only replacing the traditional jhum fields that yield multiple food and cash crops, but also areas in valleys set aside for the cultivation of wet rice.

The notion that jhum is devastating for Mizoram’s forests may need a re-evaluation, he suggested in commentary on the state’s land use policies.

“Even before NLUP was implemented, despite decades of extensive shifting cultivation, over 90 percent of Mizoram’s land area was under forest cover, much of it bamboo forests resulting from jhum,” he wrote. “Recent declines in forest cover have occurred at a period when area under jhum cultivation is actually declining, while area under settled cultivation is increasing, suggesting that the land use policy has been counterproductive to forests.”

“There is a fairy long dry season in Mizoram. In fact it is very common to see tankers carrying water, including in Aizawl, Mizoram’s capital,” Shankar Raman told mongabay.com. “So bringing in a crop that requires substantial water input into a landscape where there is a shortage of water seems like bad planning to me.”

Mindless expansion of oil palm plantations in northeastern India may also be grave news for this biodiversity hotspot’s wildlife. Permanent loss of forests to monocultures of oil palm and a lack of adequate planning are already resulting in increased rates of human-wildlife conflict.

“Some plantation cultivators next to the reserve have started complaining about wildlife like porcupines and rodents destroying their crops, and are now asking for compensation from the forest department,” said Shankar Raman, who has worked in Dampa Tiger Reserve, Mizoram’s largest wildlife sanctuary. “The areas where oil palms should be cultivated have not been planned well. For instance, they should have avoided buffer areas in conservation landscapes, water sheds, and productive rice valleys.” 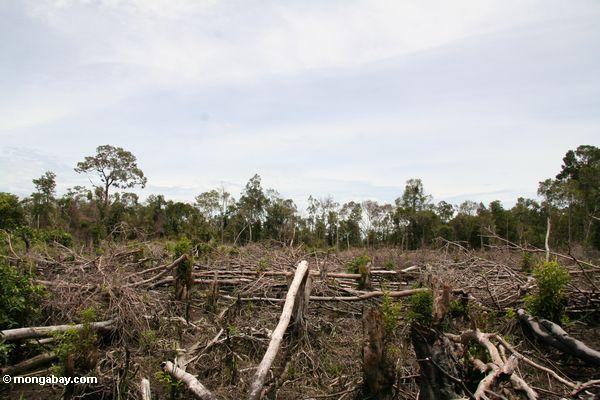 Can oil palm be sustainable in Mizoram?

Oil palm cultivation in countries like Malaysia and Indonesia has caused widespread forest loss. In several parts of these countries, plantations have forcibly and unethically displaced local communities. To combat such growing concerns, the Roundtable on Sustainable Palm Oil (RSPO), an internationally accepted certification scheme, was established in 2004. The strict RSPO standards aim to promote practices that make palm oil production environmentally and socioeconomically sustainable.

Mizoram’s government has signed memoranda of understanding (MoUs) with three private companies – Godrej Oil Palm Ltd., Ruchi Soya Industries Ltd., and Food and Fats and Fertilizers Ltd. – which will purchase oil palm fruits from farmers and sell the oil produced in their processing mills to domestic markets. All three companies are currently members of RSPO.

According to Shankar Raman, however, most of the RSPO standards are not yet in place in Mizoram. And if nothing changes in how oil palm plantations are currently managed, palm oil cultivation will most likely not be sustainable in the long run, he said.
Despite the current unsustainable practices, writing off oil palm completely will be neither possible nor desirable, said Srinivasan. Better practices, however, are necessary.

“For instance, replacing existing crops with oil palm plantations will not really make much difference to biodiversity,” he said.” Also, what we need before oil palm starts expanding in a big way is to identify areas that: (a) are suitable for oil palm climatically, and (b) areas that are biodiversity priorities, and ensure that the areas of overlap are not replaced with oil palm.”

(09/30/2014) The human cost of war is horrendous. However, while most attention is focused on the suffering caused to people—and rightly so—an understudied element is the impact on wildlife conservation. This is worrying given that many of the world’s conflict zones are situated in biodiversity hotspots.

(09/11/2014) A boom in infrastructure and population has forced India’s wildlife to eke out a creative existence in an increasingly human-modified environment. Big cats such as the leopard are often spotted within large cities, on railway tracks, and sadly, on India’s burgeoning and sprawling road network.

Next big idea in forest conservation: Reconnecting faith and forests

(07/24/2014) ‘In Africa, you can come across Kaya forests of coastal Kenya, customary forests in Uganda, sacred forest groves in Benin, dragon forests in The Gambia or church forests in Ethiopia…You can also come across similar forest patches in South and Southeast Asia including numerous sacred groves in India well-known for their role in conservation of biological diversity,’ Dr. Shonil Bhagwat told mongabay.com.

(07/15/2014) During the latter half of Sri Lanka’s civl war, between 1990 and 2005, Sri Lanka suffered one of the highest rates of deforestation in the world, losing about 35 percent of its old growth forest and almost 18 percent of its total forest cover. The conflict ended in 2009, and while deforestation has slowed somewhat, Sri Lanka is still losing forest cover at a fast pace.

Next big idea in forest conservation? Playing games to understand what drives deforestation

(06/26/2014) Dr. Claude Garcia plays games, but you won’t find him betting his shirt at the casino. As leader of the Forest Management and Development Research Group at ETH Zürich, Garcia and his team use participatory modeling and role-playing games, merged with more traditional disciplinary sciences such as ecology, economics, and sociology to understand and manage complex landscape change in the tropics.