How protected are they? Report finds world’s Protected Areas may relax, shrink, even completely disappear

by Mrinalini Erkenswick Watsa on 28 October 2014

This is the first part of a four-part series examining trends in Protected Area Downgrading, Downsizing, and Degazettement (PADDD). Read the second and third parts for a more comprehensive look at the issue.

On March 1, 1872, the United States Congress declared 3,400 square miles of land spanning three states as the country’s – and the world’s – first national park. We call it Yellowstone.

Soon followed the inclusion of hundreds of the planet’s most remarkable landscapes into an international network of protected areas (PAs) that are, in some cases, the only safeguard for entire ecosystems. Today, there are over 160,000 PAs spanning 12.7 percent of the planet’s land surface.

At the core of this idea is the fundamental assumption that once created, PAs will be forever sacrosanct, increasing only in number and extent over time. Forthwith, nations embark on multi-year struggles to carefully allocate “Protected Area” status to deserving sites. A concerted effort has ensured that PAs are indeed increasing in number and coverage; however, recent evidence indicates that they are not fundamentally inviolable – not today, and most likely not since the early 1900s. 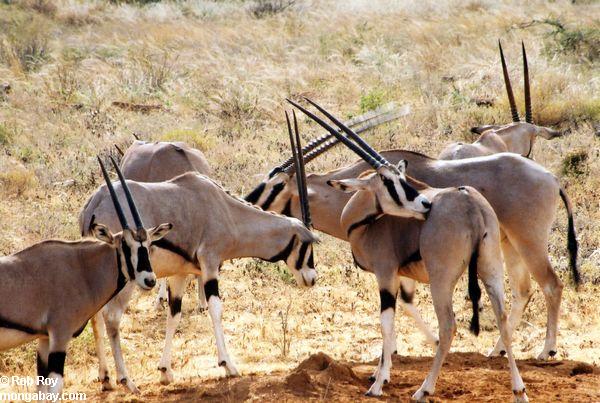 Protected areas appear to have convoluted and knotty histories, much like any other piece of property – they can change hands, be devalued and grow or shrink with time. One remarkable database established by the World Wildlife Fund (WWF), PADDDtracker.org, monitors all PAs and keeps diligent records of the changes they have undergone since the year 1900.

National parks and other protected areas are subject to three major alterations over time: downgrading (the legal increase in the number or scope of human activities within a PA), downsizing (a decrease in PA area via a legal boundary change) and degazettement (when legal protection is lost for a PA in its entirety).

Michael B. Mascia, a researcher with the WWF’s Conservation Science Program, recently lead a review of the data collected by the PADDDtracker for three regions: Africa, Asia and Latin America. The results verify in no uncertain terms that PAs are often subject to Protected Area Downgrading, Downsizing, and Degazettement (PADDD) – and they are rarely ever here to stay.

In his report, published in the Journal of Biological Conservation this year, his team identified 543 instances of PADDD occurring in 375 PAs spread across 57 countries. These ranged from 140 PADDD events in Kenya alone, to an overall average of 9.5 events in most countries.

The three forms of legal alterations that protected areas can undergo. Image adapted from PADDDtracker.org Click to enlarge.

Of the three types of alteration, 60 percent were downsizing events, followed by degazettement (28 percent) and downgrading (12 percent). The impact of any of these events could be as small as less than a hundredth of a square kilometer to as large as altering 103,600 square kilometers (mean area affected per country was ~1300 square kilometers).

Across the three regions assessed, PADDD events affected at least 503,000 square kilometers – or 4 percent of the total protected area in these regions.

The extent of PADDD varied per region. In some countries, like the Philippines, PADDD impact was very low (less than 0.05 percent) but in others, like Uganda, over 55 percent of PA land has undergone some kind of radical alteration since its creation.

At least 10 percent of all PAs in the forty-four countries studied had been, on average, subject to downgrading, downsizing or degazettement. Strikingly, over a fifth of all PAs that underwent one PADDD event did not stop there – they were affected by changes in legislation more than once.
In the end, 5.5 percent or thirty of the 543 PAs assessed had their protections partially or wholly reversed. 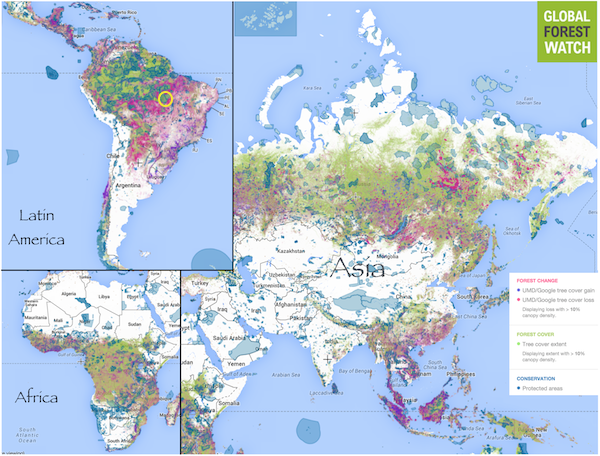 Tree cover gain and loss, tree cover extent, and protected areas mapped out over the Latin America, Asia and Africa. In many cases, PAs are they only relatively intact landscapes in their regions — oases of wilderness surrounded by human disturbance. For instance, one large swath of protected area in the middle of Brazil (yellow circle) is the only large tract of land that has not been heavily deforested. Data from Global Forest Watch show that the area immediately surrounding the PA lost between 15 and 27 percent of its forest cover from 2001 through 2012. Map and data courtesy of Global Forest Watch. Click to enlarge.

The Driving Forces Behind PADDD

A single major player has emerged as a leading trigger of PADDD events across the globe: industrial-scale resource extraction and development. Only half as many events were due to local land pressures and claims, and even fewer still were caused by comprehensive national revisions of PA systems.

Mascia and colleagues were also able to identify that certain industrial activities, such as mining, most commonly caused downgrading of PAs, whereas industrial agriculture, rural settlements and land claims tended to cause downsizing instead.

The complete degazettement of PAs, interestingly, occurred most often in association with conservation planning, indicating a tendency for entire areas to be classified as not worth protecting likely due to poor management and enforcement of conservation status in the past.

The period between 2011 and 2020 was declared by the UN as the “Decade on Biodiversity.” In late 2010, the Convention on Biological Diversity (CBD) committed to increase the extent of PAs to 17 percent of national lands across the globe by 2020. One hundred and ninety three nations agreed to strive towards this goal from the 2010 level of 12.7 percent PA global coverage. 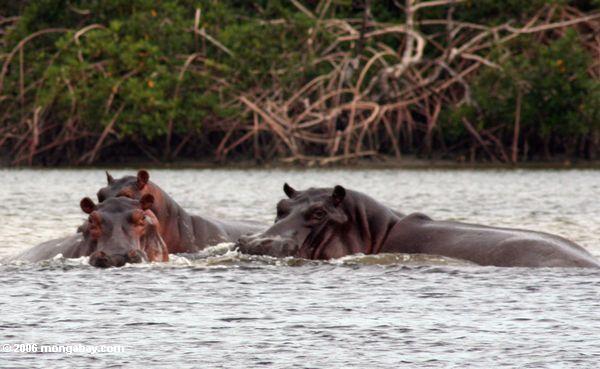 Hippos in Loango National Park, Gabon, home of the “Surfing Hippos.” Photo by Rhett A. Butler.

Masica’s report specifically targeted countries with PADDD events to see if they could meet these goals despite such alterations. Of the 57 countries with recognized PADDD events, 17 (30 percent) had already achieved the CBD goal for 2020 as of 2013. Had downsizing and degazettement not occurred, this group would have included at least four more nations. These include countries famous for their national parks, such as Kenya (11.8 percent coverage would become 18.5 percent) and Rwanda (10 percent would grow to 20.7 percent). With no downsizing or degazettement, the amount of PA land would increase by 10 percent in Bhutan and actually double in Sudan.

Mascia and colleagues are optimistic when considering the impacts of PADDD, despite the fact that it reduces the overall area of land and water within PAs. They highlight evidence of significant successes among areas managed by indigenous groups and local communities, which often outperform government-run PAs.

The wholesale increase in PA coverage might not always be inherently good for biodiversity. Some PADDD events are important, for they allow for historically poor PA decisions to be corrected – with trade-ins of PAs of limited conservation value for sites with high biodiversity, or the fair allocation of land to indigenous groups previously deprived of these rights. 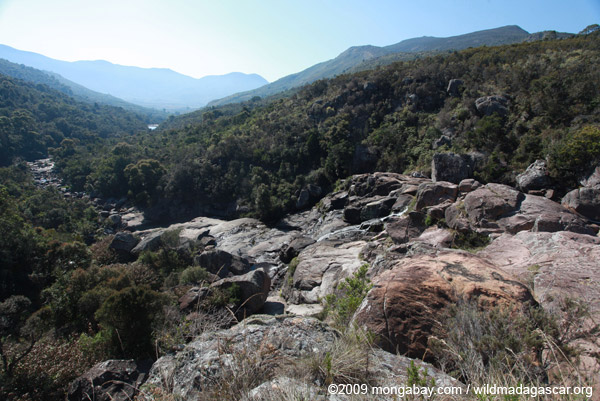 Andringitra National Park in the Antanifotsy Valley, Madagascar. Photo by Rhett A. Butler.

But the authors caution this represents a relatively small proportion of PADDD events.

They urge further analysis of patterns behind proposed PADDD events, monitoring as these events proceed, and detailed investigation of the outcomes of such proposals.

In three further articles, we will examine these factors in the three regions assessed in this study, with a focus on specific examples to highlight the range of variation observed among PADDD events the world over.