This is the second of a two-part series, Part I of which overviews the status of Bornean orangutans in southern Kalimantan.

Two decades ago, a project to convert one million hectares of forest to rice paddies was undertaken by the Indonesian government in southern Kalimantan. As predicted by experts, this Mega Rice Project (MRP) was a massive failure and was eventually abandoned, but not before it destroyed critical orangutan habitat. Now a new project is trying to knit together what’s left and turn the area’s isolated orangutan populations into one of Borneo’s largest.

Led by Megan Cattau from Columbia University and carried out in collaboration with The Orangutan Tropical Peatland Project (OuTrop) and Center for International Cooperation in Sustainable Management of Tropical Peatlands (CIMTROP), a study published recently in Oryx marks the first comprehensive effort to research the effects of habitat fragmentation and deforestation on Bornean orangutans in the region. Researchers said the former MRP was the main reason for the degradation of the orangutan’s habitat. 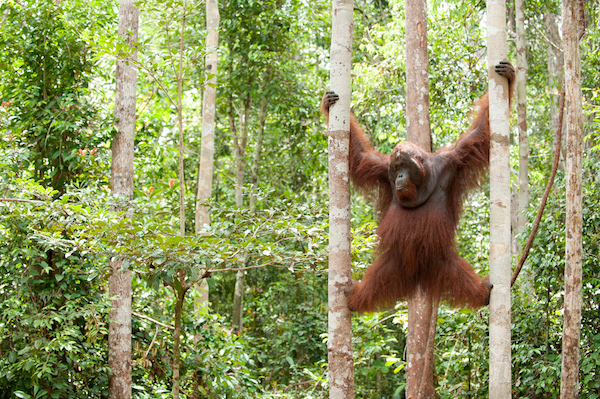 Deforestation began in earnest in the middle half of the twentieth century largely to feed the demands of the international tropical timber market and make room for tree plantations, wiping out millions of hectares—and the species inhabiting them. Since the 1950s, the number of wild Bornean orangutans (Pongo pygmaeus) has plummeted between 50 and 84 percent. The most recent survey, conducted between 2000 and 2003 estimated between 45,000 and 69,000 orangutans existed in the whole of Borneo. With available habitat shrinking since then due to plantation expansions, logging and fires, and other threats such as poaching, it’s likely that number has been reduced further.

According to Global Forest Watch data, the MRP region and the surrounding area lost approximately 321,000 hectares of tree cover from 2001 through 2012. However, some of this loss it likely attributable to the harvesting of extant plantations, which is interpreted by Geographic Information Systems (GIS) as forest loss. The area is dominated by peat swamps, many of which were drained and are now dry and highly inflammable. Because of this, wildfires are rife. In just the past week (from Sept. 30 to Oct, 7), NASA satellites detected more than a hundred fires in the region.

In and around the million-hectare MRP in southern Kalimantan, more than half of the region’s Bornean orangutan population has been wiped out in less than 20 years. Already threatened by hunting, the illegal pet trade and habitat loss because of the demand for timber and palm oil, the MRP-induced fragmentation left the region particularly susceptible to devastating fires that continue to pose an extreme threat to orangutans’ survival. 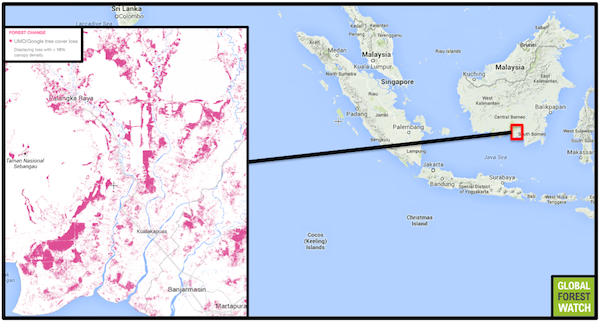 This area represents approximately 2.5 million hectares, of which one million belongs to the now-defunct Mega Rice Project (MRP). The area lost approximately 321,000 hectares of tree cover from 2001 through 2012, mostly within the MRP. Map courtesy of Global Forest Watch. Click to enlarge. 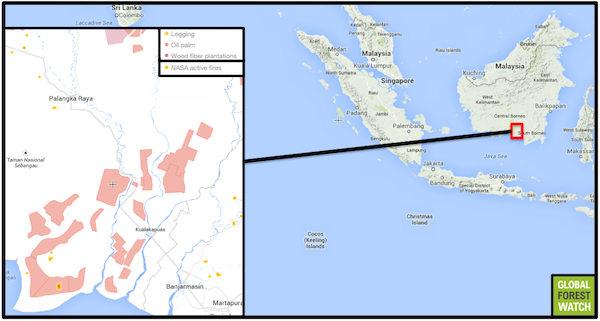 Despite the abandonment of the MRP, active palm oil plantations still occupy the area. A wood fiber concession is also present in the north. No logging concessions are currently registered in the area. A total of 119 fires were detected in the region shown in just the past week. Map courtesy of Global Forest Watch. Click to enlarge.

However, despite so many factors working against orangutans, the researchers found theirs may not be an entirely lost cause just yet.

“We were surprised and delighted to find them in the smaller forest patches,” Cattau said.

Even though many individuals continue to persist in these conditions, Cattau believes further forest loss will inevitably continue reducing their population.

According to Simon Husson, Founder of OuTrop and Director of Conservation, those individuals that survive in fragments are the fortunate few.

“Orangutans are very resilient over the short-term, and the orangutans we found are the lucky survivors that have persisted after the tremendous upheaval to their habitat,” he said. “No doubt many more died of starvation, or were shot or perished in the fires.”

The remaining forest patches, Husson said, provide enough food to support orangutans that were there originally. However, there may not be enough for newcomers that move into these oases when surrounding forest is cleared.
“These latter orangutans are refugees moving into the remaining patches, which compete with the residents for food resources or forage on sub-standard foods,” Husson said. “How long they can do this for – we don’t know, and it is probable that some degree of overcrowding is presently occurring.” 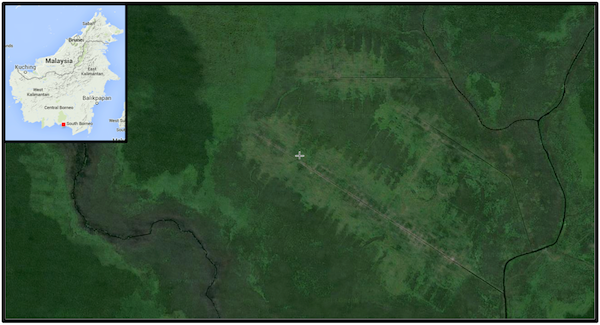 The MRP cleared and drained thousands of hectares of forest starting in the mid-1990s. Here, drainage canals are visible via satellite imagery. Photo courtesy of Google Earth Engine. Click to enlarge. 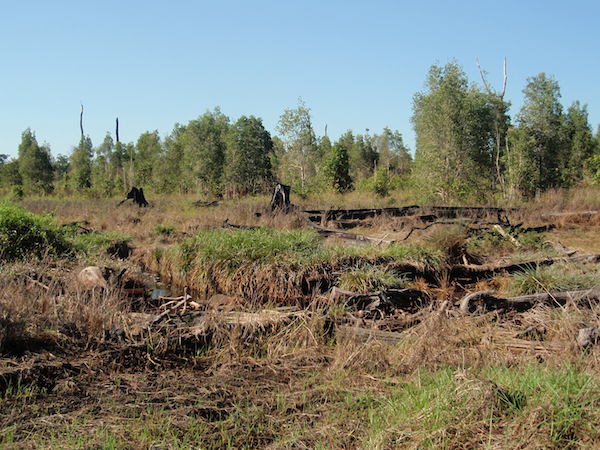 A burned and deforested landscape in the former Mega Rice Project area. Photo courtesy of Megan Cattau and OuTrop.

According to Cattau, this “theory of crowding compression” means that the number of orangutans found in a forest area can be temporarily higher than the number that the area can support in the long term. Because of this, the full impact of deforestation on wildlife may not be obvious right away.

“The idea is that orangutans will crowd into remaining forest as their range becomes deforested, and there is a lag time before the population decreases due to the stress of inflated density,” she explained. “There is therefore a risk that we may see future population declines resulting from past/current disturbances.”

A glimmer of hope, however, lies in an ambitious on-the-ground effort to reconnect habitat fragments spread over thousands of hectares in the MRP region. If it works, the reconnected habitat fragments could coalesce the region’s small and isolated orangutan subpopulations into one of the species’ ten largest populations in the whole of Borneo, according to Husson. 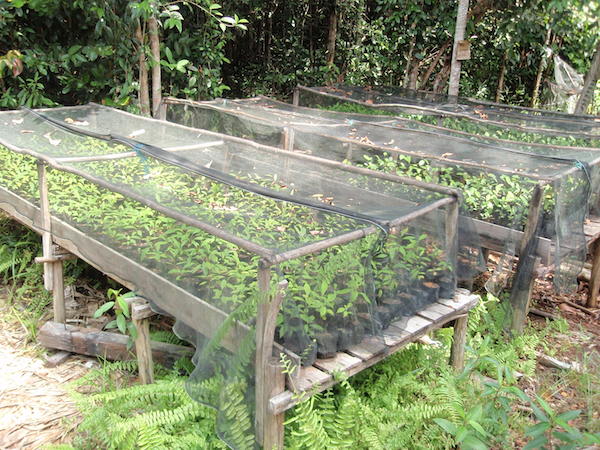 However, the project is not without its challenges.

“It’s extremely difficult and a project of this kind has not been attempted before, which is why most carbon-conservation projects in Central Kalimantan have focused on intact forests with less need for restoration and rehabilitation work,” Husson said.

But the researchers believe there is still hope for areas that have been degraded. According to Husson, what still exists in impacted areas needs to be protected. That means stopping fires, infilling canals, preventing development and encroachment, and replanting. Also, he said, a zonation and conservation plan must be developed that accounts for all stakeholders’ concerns and helps reconnect habitat as far as possible.

Cattau also sees promise in a holistic and thorough approach.

According to Husson, one of the goals of the project is to keep the spotlight on this area by collecting evidence and distributing information. He also emphasizes the need for further financial investment in conservation initiatives, such as REDD+, in which developing nations are rewarded by wealthier countries for lowering carbon emissions from deforestation.

“With a more guaranteed return on investment, more difficult propositions may be taken up,” he said.

It may be a tall order, but Husson says it is important to keep in mind that, “reconnection of these fragments is feasible, unlike in so many proposed corridor projects where intervening roads and development are major barriers to reconnecting isolated forests.”

A swath of peat-swamp forest in Central Kalimantan, Indonesia. Once disturbed, peatlands can take centuries to recover. Photo courtesy of Megan Cattau and OuTrop.