Google Maps is now available for Tanzanian forest paths. Users can walk virtually along the same trails Jane Goodall has used for decades of chimpanzee study — and even into her house.

Gombe Street View, a joint effort between Google Maps, Google Earth Outreach (GEO), Tanzania National Parks, and the Jane Goodall Institute (JGI), used the same method to capture Gombe Stream National Park as Google did when mapping streets around the world. Except instead of using vehicles to carry the 15-lens cameras used for recording the 360-degree images, Google’s two “trekkers” had to carry the cameras around in 40-pound backpacks. 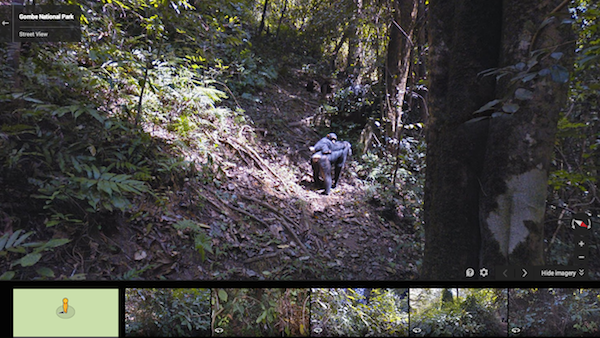 The result is an immersive, interactive world that takes you from the shores of Lake Tanganyika — the longest freshwater lake in the world — to densely forested valleys to the stark tops of hills, with chimps featured prominently in many of the shots.

“When it’s two dimensional, when it doesn’t include imagery, it’s not a very faithful representation of reality,” Rebecca Moore, founder of GEO, told Smithsonian Magazine. “We want to create this highly realistic replica of the planet and put it in everyone’s hand.”

Users can even look around in Jane Goodall’s house, where skulls and books abound.

Jane Goodall is an English primatologist famed for her pioneering work with eastern chimpanzees (Pan troglodytes schweinfurthii)in Gombe over the past half-century. Through her research, Goodall upended the entrenched belief that only humans were capable of making and using tools after observing chimps modifying sticks to extract termites. She also disproved the notion that chimps are vegetarians, documenting their hunting of smaller primates.

Goodall is also a global leader in chimpanzee conservation, founding the Jane Goodall Institute in 1977 in part to support protection efforts. The eastern chimpanzee is a subspecies of the common chimpanzee, which is currently listed by the IUCN as Endangered. In all, between 172,700 and 299,700 chimps were estimated to exist as of a 2003 survey, and their numbers are dropping ever-further in response to habitat destruction, poaching, and disease.

Studies have shown extensive deforestation of chimp habitat. According to Global Forest Watch, the region encompassing eastern chimpanzee habitat lost more than 3.5 million hectares of tree cover–nearly 3 percent of its forests–from 2001 through 2012.

Google and JGI previously partnered to use mapping technology to track chimp population declines. They hope the new Gombe Street View will help spur public awareness of the species and conservation action. 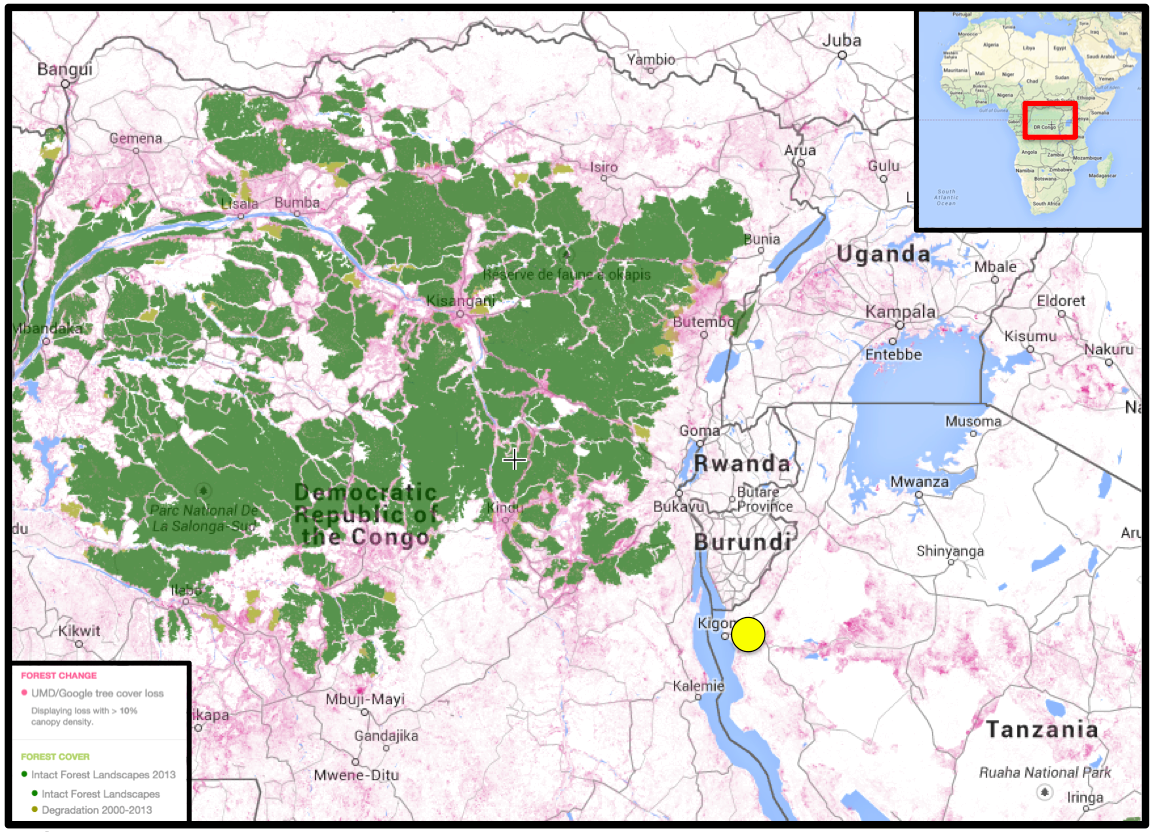 The region shown lost approximately 3 percent of its forest cover from 2001 through 2012, with intact forest largely relegated to northern DRC. The area around Gombe Stream National Park (yellow dot) is void of large tracts of undisturbed forest. Map courtesy of Global Forest Watch. Click to enlarge.

(10/13/2014) Famed primatologist and conservationist Jane Goodall—whose image is known the world over—has joined the advisory board of mongabay.org. This is the non-profit branch of mongabay.com, an environmental and science website with a special focus on tropical forests. Goodall first came to global prominence at the age of 26 when she set off to Gombe Stream National Park, Tanzania to study chimpanzee behavior.

(10/06/2014) One of the largest iron ore deposits in Africa is located in a strip 47 kilometers long and three kilometers wide in the Republic of the Congo (RoC), bordering Gabon. A core section of the Guineo-Congolian Forest rises above this vast mineral deposit, and provides a home to flagship endangered species like western lowland gorillas, chimpanzees, and forest elephants.

Why are great apes treated like second-class species by CITES?

(09/11/2014) The illegal trade in live chimpanzees, gorillas, bonobos and orangutans showed no signs of weakening in the first half of 2014—and may actually be getting worse—since the Great Apes Survival Partnership (GRASP) published the first-ever report to gauge the global black market trade in great apes in 2013.

Can it be stopped? Ghana’s forests ‘could completely disappear in less than 25 years’

(08/25/2014) Ghana contains forests that are biologically unique and important both for the wildlife they contain and the human communities that depend on them. However, the country is experiencing one of the greatest rates of deforestation in West Africa. At its current rate of forest loss, a study estimates that Ghana could be devoid of major forest cover in less than a quarter-century.

Running to reforest: communities, NGOs work to save Ugandan reserve in the midst of massive deforestation

(08/21/2014) Stung by massive loss of forest cover in Bugoma central forest reserve, part of a vast chimpanzee habitat in the western part of Uganda, seven private local and international organizations in the east African country have joined hands to raise awareness of forest issues and money for reforestation efforts — by launching a conservation-themed quarter-marathon.

How did Ebola Zaïre Get to Guinea?

(08/05/2014) The vicious Ebola outbreak that has already killed over 800 people this year was not a strain endemic to the region as initially believed. Instead the University of Edinburgh found that the strain is the same as the Ebola Zaïre found in the Democratic Republic of Congo (DRC), formerly Zaïre. Does this mean the strain could have come from illegally-trafficked great apes instead of fruit bats as widely reported?