Uganda, Ethiopia, and the DRC made lofty forest restoration pledges Forest during the UN Climate Summit last month. Will they follow through?

The United Nations Climate Summit at the end of September saw a host of governments, agencies and organizations rally around an international agreement aimed at stopping deforestation called the New York Declaration on Forests. In it, three African nations were recognized for their commitments to restore collectively more than 25 million hectares of forest – an area larger than the West African country of Guinea – part of a plan to restore 350 million hectares of forest by 2030.

But several organizations declined invitations to sign the pact because they say it fails to lay out “concrete action” to fight climate change, and some experts in the field worry that the announcements are little more than political posturing.

Ethiopia, Uganda and the Democratic Republic of Congo (DRC) pledged to restore huge areas of forest within their borders. Guatemala and Colombia also committed to restoring more than a million hectares each. 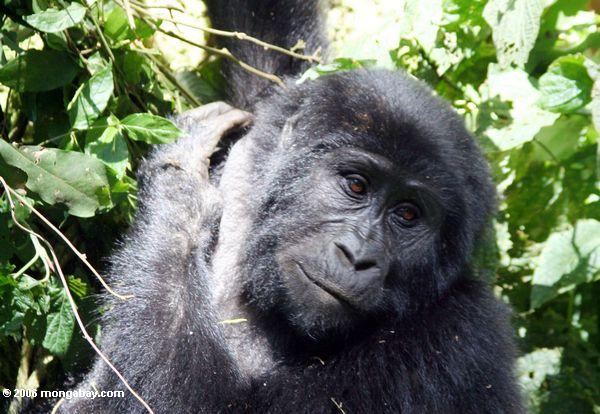 Eastern gorillas (Gorilla beringei) are listed as Endangered by the IUCN and are dependent on forests. Two subspecies exist. The eastern lowland gorilla (G. b. graueri) is the most populous, estimated at 5,000 individuals in the DRC as of a 2010 report by the UN Environment Programme. The other, the mountain gorilla (G. b. beringei, pictured), is thought to number only 700 individuals, which range over small regions of the DRC, Uganda, and Rwanda. Photo by Rhett A. Bulter

According to Patrick Wylie, a senior forest policy officer with the International Union for Conservation of Nature (IUCN), the aim was to recognize the efforts of these countries. “I think goals like this create momentum,” Wylie said. “Let’s recognize our good work and show by example.”

But some forest advocates and researchers say the motivation behind the announcements has more to do with politics than substantive work that will reverse the deforestation rates. Specifically, they’re concerned that the commitments are intended to galvanize support for REDD policies put in place by the UN. Short for “reducing emissions from deforestation in developing countries,” REDD schemes pay forested countries to bolster their investment in forest protection in an effort to slow or stop deforestation, thereby reducing global carbon emissions that occur when those trees are cut down and maintaining forests’ that pull carbon from the air.

Tim Christophersen, a senior programme officer with the United Nations Environment Programme, confirmed in an email that these commitments are supported “as part of our engagement in the UN-REDD programme,” which offers “up to $4 million per UN-REDD partner country to get ready for REDD+.” REDD+ would extend the policies to combat forest degradation in addition to deforestation. 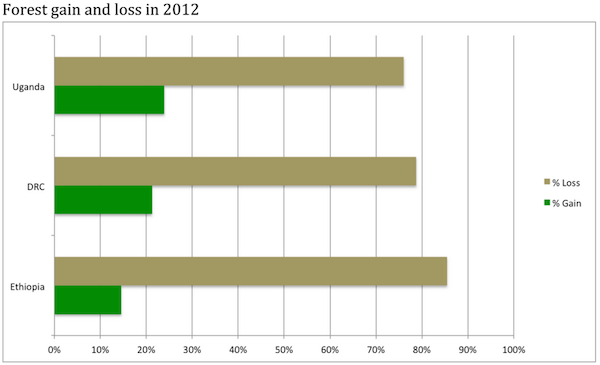 More than 70 percent of forest change in Uganda, Ethiopia and DRC resulted in forest loss in 2012, according to data from Global Forest Watch. Click to enlarge.

REDD policies were designed to encourage better forest stewardship and to combat climate change. But critics believe it allows richer nations to continue activities such as oil production. And they worry that these types of commitments are used to build political momentum behind the appearance of restoring forest to drum up support for new funding agreements – in this case, “creating demand for REDD+.”

Both the commitments and more broadly the New York Declaration contained little information about how or precisely where the restoration will happen. Ethiopia, the least-forested of the three African nations with less than 30 percent of its land mass covered by trees, committed to restoring 15 million degraded hectares. That’s roughly half of the Horn of Africa country’s current forested landscape.

According to Global Forest Watch data, Ethiopia lost nearly 38,000 hectares of forest in 2012 – indicative of a trend of escalating deforestation in the country over the past decade. Restoring such a large area of forest in the next 16 years might be an ambitious attempt to reverse that slide. Data also shows that in 2012, the bulk of forest change in all three countries was negative. 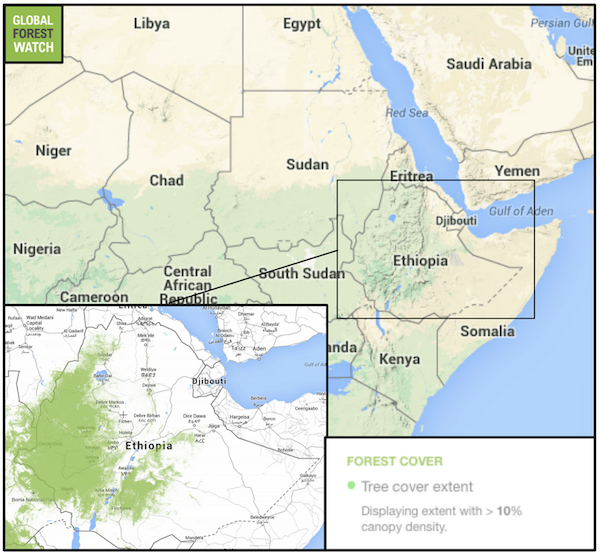 Forests cover more than 30 million hectares of Ethiopia, about 30 percent of the country’s area. The country committed to restoring 15 million hectares of forest, announced in the New York Declaration on Forests. But skeptics question the motivation behind this figure and whether it’s realistic. Map courtesy of Global Forest Watch. Click to enlarge.

But the boldness of Ethiopia’s figure, as well as the 8 million hectares in DRC and the 2.5 million hectares in Uganda slated for restoration, has led some to question how realistic those targets might be. It also highlights the lack of consensus for the usage of the terms “restoration” and “degradation” that’s fundamental to many disagreements about combatting deforestation.

“We currently internationally have no definition that has been accepted vis-a-vis forest degradation, nothing at all,” said D. Andrew Wardell, Senior Manager for Research Capacity and Partnership Development with the Center for International Forestry (CIFOR). “If you can’t define it, you can’t measure it.”

Patrick Wylie told mongabay.com that the process for and monitoring of restoration will vary from country to country. He added that the methodology for identifying the area of each country’s commitment wasn’t standardized. Some countries may have used broad national assessments to reach the committed-to figures, while others may have specifically identified areas that could be restored. But he said a domestic commitment to forest restoration had to underpin the pledges.

Simon Counsell, executive director at the Rainforest Foundation UK, isn’t so sure, particularly in the Congo Basin where RFUK works extensively. “We’ve not really seen anything from DRC in the past about restoring forest,” Counsell said in a phone interview. “It’s absolutely not been on the political agenda as far as we’re aware.”

In Counsell’s view, the New York Declaration, and by extension these commitments, don’t take the proven route to reversing deforestation, instead focusing on REDD and the voluntary, nonbinding – which the Declaration is – promises of corporations and governments.

“The only case so far where there’s been a major reduction in tropical deforestation has been in Brazil, where neither of those were particularly important,” Counsell explained. “The most important factor there has been government regulation and stronger government implementation.”

Wardell, who also has decades of experience working in several sub-Saharan countries, agrees. “Unless and until there are radical transformations in terms of current forms of governance at national and subnational levels, the government might, for the sake of argument, be able to say we’ve restored 8 million hectares,” he said. “But if during the same period another 10 million hectares has been degraded because of informal logging, what’s the net gain?”

Hannah Mowat, a forests and climate campaigner with the organization FERN that monitors the role that the EU plays in forest use and protection, made a similar point in an email to mongabay.com: “Restoration is secondary to the need to protect what is already standing.”

She also argues that trying to restore these millions of hectares of forest in the next decade and a half simply isn’t realistic. “Rainforests take 800 years to reach full maturity,” she said. “We cannot talk about restoration within human time scales, or even generational time scales.”

FERN and RFUK, as well as Greenpeace, were invited to sign the New York Declaration but declined, citing a lack of tangible activities to accomplish the goals laid out. Each organization also commented on the dearth of detail about the rights of local communities or how questions of land tenure might be handled.

Counsell said that the people who call the forests home need to be seen as part of the solution. “The evidence is growing that ascribing rights to local communities is one of the better long-term ways of protecting forest,” he said. For example, a 2012 paper in the journal Forest Ecology and Management led by Luciana Porter-Bolland of the Institute of Ecology in Veracruz, Mexico, demonstrates that communities often do a significantly better job of protecting forests than governments.

Patrick Wylie said that commitments like these are made with the tacit understanding that “subnational actors and individuals” will be included in restoration. “If there’s one lesson we know from conservation from the last decades, it’s that fencing and keeping people out isn’t the solution,” Wylie said. “People have to be integrated, and we know that land-use decisions are made every day.”

But in his view, the New York Declaration obligates agencies like IUCN, which did sign it, to take the lead. “The individual signatories – be they organizations, governments or otherwise – it’s really on us to bring about those changes through our programming, through our activities.”

To many skeptics of these types of commitments, therein lies the struggle – that even though empirical research offers evidence supporting one strategy to combat deforestation, the political approach seems to advocate a different, often less well-defined, approach all together, one that often “has very little to do with the science,” said Wardell.

These types of commitment announcements, he said, “are the sorts of figures that get splashed around, precisely because they’re intended to make a splash in these sorts of events.”