Scientists have long known that forest fragments are not the same ecologically as intact forest landscapes. When forests are slashed into fragments, winds dry out the edges leading to dying trees and rising temperatures. Biodiversity often drops, while local extinctions rise and big animals vanish. Now, a new study finds another worrisome impact of forest fragmentation: carbon emissions.

Looking at forest fragments in Brazil’s Atlantic Forest, new research in the journal Nature Communications finds that carbon loss along the forest edges was more significant than believed. The researchers used remote sensing and computer modeling to measure how much carbon was released from a forest fragment’s edge, defined as a 100 meter strip along the periphery.

“Tree mortality increases, so that they can’t store as much carbon as healthy trees in the centre of the forest, the core area,” explained Sandro Pütz, the lead author of the study, with the Hemholtz Centre for Environmental Research (UFZ).

The make-up of forests along the edges of a fragment becomes significantly different. Here, faster-growing, weedier species dominate, which store less carbon. The big, old trees that store the most carbon often don’t last in the new conditions, nor does their progeny survive. 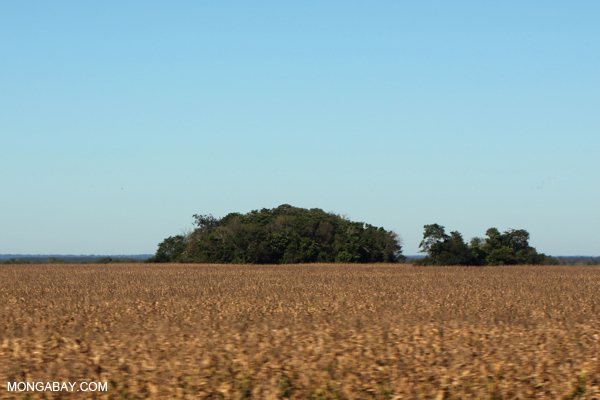 A forest fragment rising from a cornfield in Brazil. Photo by: Rhett A. Butler.

“Most vulnerable are trees specialized for life in the dark forest understory and that need animals such as birds or bats to disperse their seeds and pollen,” Henrique Nascimento, of Brazil’s National Institute for Amazonian Research in Manaus, told mongabay.com in 2006. “When you fragment rainforest, hot winds from the surrounding pastures kill many trees, which just can’t handle the stress.”

Given this, scientists have long expected that forest fragmentation and the resulting so-called “edge effects” would lead to higher carbon emissions for these forests, but they hadn’t put a number on it until now.

The Atlantic Forest, also known as the Mata Atlântica, is arguably the world’s most degraded tropical rainforest: only about seven percent of the ecosystem survives. Worse still, 90 percent of this biodiversity-rich forest survives in fragments smaller than 100 hectares. Instead of swiss cheese, this forest is more like the holes cut out of the more intact cheese. 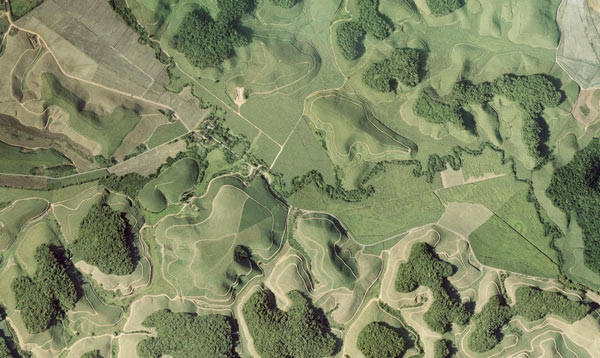 Forest fragments in the Atlantic Forest surrounded by sugarcane. Photo by: Usina Trapiche.

“It is a forgotten process in the global carbon circulation of the vegetation,” said co-author Andreas Huth also with UFZ. “However, this effect should urgently be taken into account.”

Currently, calculations by the Intergovernmental Panel on Climate Change do not take into account forest fragmentation when estimating carbon losses due to deforestation and land-use.

The researchers also calculated that in order for a fragment to be large enough to avoid these extra carbon losses from edge effects, it would have to be at least 10,000 hectares, shape-dependent. This is about the size of the Bronx or the island of Jersey.

Fragmented forests hurt some bat species, may benefit others

(09/23/2014) Development of roads and other structures disturb large, continuous patches of habitat for wildlife. This habitat fragmentation is one of the biggest contributors to species extinction, as the local ecology and species interactions are altered. A new study finds that leaf-nosed bat abundances in Mexico are closely linked to how sensitive each species is to habitat fragmentation.

(06/25/2014) Habitat fragmentation and hunting are both distinct critical issues facing forests today that require their own countermeasures. Yet, much research has chosen to conflate the two, potentially leading to ineffective ecosystem management. According to a new study, the interaction of both factors can contradict the effects of hunting and fragmentation alone, revealing a research and management gap that urgently needs to be filled.

(06/04/2014) Climate change may be taking a hidden toll on intact rainforests in the heart of the Amazon, finds a new study based on 35 years of observations. The research, published in the journal Ecology, focused on the ecological impacts of fragmentation but unexpectedly found changes in the control forests.

(05/20/2014) In human-dominated countryside areas, forests are often fragmented and scattered among a matrix of developments such as plantations and pastures. Scientists have long overlooked the habitat value of these matrices. However, according to a recent study published in Nature, the biodiversity of altered countryside areas that exist between islands of fragmented forests can be significant and deserving of conservation attention.

(01/31/2014) Dr. Stuart Pimm is an expert in extinctions: why they happen, how fast they happen, and how they can be prevented. Reconnecting forest fragments and avoiding fragmentation, according to Pimm, are among the most crucial things we can do to conserve global biodiversity. His organization SavingSpecies identifies areas at-risk for extinctions and helps local organizations fundraise so they can protect and restore habitats and safeguard biodiversity.