by Mrinalini Erkenswick Watsa on 31 October 2014

This is the third part of a four-part series examining trends in Protected Area Downgrading, Downsizing, and Degazettement (PADDD). Read the first and second parts for a more comprehensive look at the issue.

Brazil is the country with the largest protected area system in the world, spanning nearly 220 million hectares of land, from the Pantanal marshes to rainforest crawling with wildlife. The country is home to endangered species such as the golden lion tamarin (Leontopithecus rosalia) and the brazil-nut poison frog (Adelphobates castaneoticus) that cannot be found anywhere else on the planet.

Its protected areas (PAs) include over half the Amazon rainforest, and make up a total of 12.4 percent of all PAs the world over. According to Global Forest Watch, an environmental data repository run by the World Resources Institute that tracks global forest change, 58 percent of the country is forested.

It is no wonder then that Brazil and its rainforests are referred to as the “lungs of the world” – but can they breathe on our behalf forever? 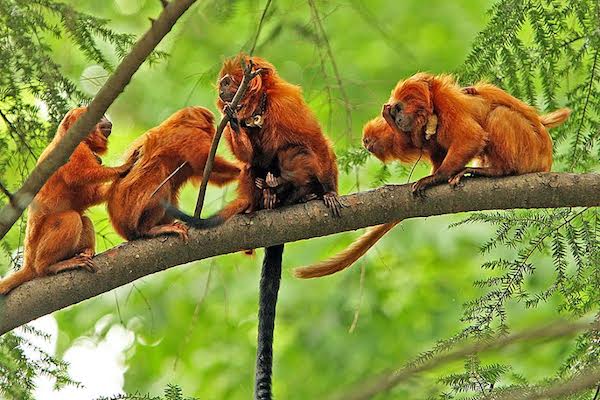 Recent analyses of Protected Area Downgrading, Downsizing and Degazettement (PADDD) by Enrico Bernard from the Department of Zoology of the Federal University of Pernambuco in Brazil, published in the journal Conservation Biology in early January, reveal however, that the “lungs of the world” might have some difficulty breathing for us in the future. Despite significant expansions in protected areas since the mid-2000s, PA formation has stagnated in Brazil since 2009.

“We identified 93 events that changed the boundaries or categories of Brazilian CUs in the last 31 years: 5 downgrading, 26 downsizing, 11 degazetting, 49 reclassifying, and 2 upgrading,” note Bernard and colleagues in their article.

Degazettement is defined as the complete revoking of protected area status, effectively removing all security a piece of land may enjoy from being exploited. According to Bernard, of all of these PADDD events, 42.3 percent occur in the Amazon Basin, affecting an area slightly larger than the state of West Virginia. While most of the affected area falls under the category of downsizing and downgrading, 17 percent was legally degazetted.

PADDD events in Brazil have a discernible trend – one that can only be described as increasing at an exponential rate. While Bernard detected only six events from 1981 to 2000, there were 37 in 2011 alone – in fact, 74.1 percent of all PADDD experienced in the country occurred only between 2008 and 2012. 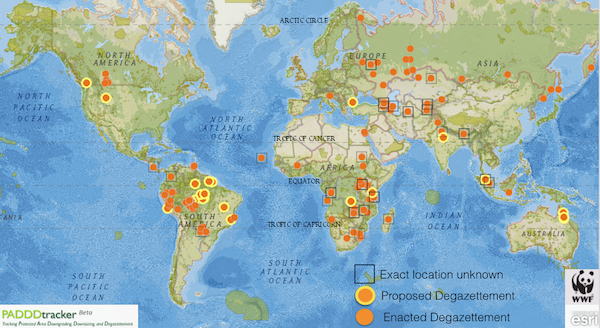 A world map indicating all degazetting events documented by the WWF’s PADDDtracker. Brazil alone has a high concentration of these events globally. Click to enlarge.

PADDD events over time in Brazil, depicting recent drastic increases in both proposed and enacted events. Data from PADDDtracker.org. Click to enlarge.

At the start of 2014, there were four legislative bills that proposed to degazette, downsize, or downgrade five CUs in the Brazilian Amazon. All but one were in the northeastern state of Pará, a state with 83 percent forest cover, according to Global Forest Watch.

“Two bills were proposed in the Chamber of Deputies and two in the Federal Senate from 2006 to 2009,” reports Bernard in his analysis. All of these bills have received at least one favorable vote, which indicates they will remain in the pipeline for plenary votes in the future.

“If the bills are enacted,” Bernard writes, “the changes would affect parks and reserves that cover 2,102,951 hectares.” In other words, more than 8,000 square miles (20,000 square kilometers) of forest could be impacted by this legislation.

The Degazettement of Pará

In the often-conflicted state of Pará, on the morning of February 12, 2005, Sister Dorothy “Dot” Mae Stang stepped out of her home to walk to a community meeting. Originally from Ohio, Sister Stang was a forceful advocate for the rural poor and their rights in the face of larger organized ranchers.

That morning, even the bible she habitually carried with her did not prevent two armed men from remorselessly gunning her down. Given her service to underrepresented people in Brazil as an environmental activist, the United States Government and Brazil coordinated the arrest of her killers, who were subsequently sentenced to several decades in prison.

The area in which she was murdered falls near highway BR-163 in Pará. After first declaring a logging moratorium in the area, President H.E. Luiz Inácio Lula da Silva of Brazil subsequently went on to announce a significant expansion in land protection in the area, particularly near the highway. The February 2006 decree brought the total protected area in that region of Pará to 6.4 million hectares, which is more than twice the size of Belgium. 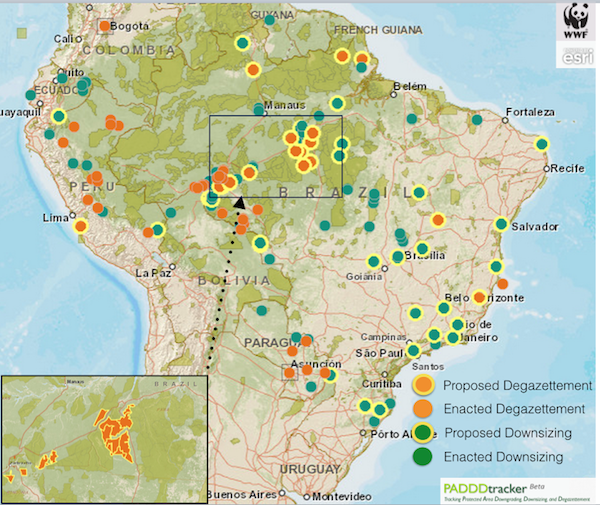 Area of proposed degazettements in Brazil, highlighting Pará, where a large expansion in protected areas is now being threatened in court. Data from PADDDtracker.org. Click to enlarge.

Congressman Asdrubal Bentes proposed to overturn the Presidential decree in May 2006, just three months after its issuance, citing that the protected areas, intended by Brazilian President Luiz Inacio Lula da Silva to ensure that planned paving of highway BR-163 does not result in increase logging in adjacent forests, were created illegally. Bentes claimed the president overstepped the limits of executive power and expropriated land without consulting the Congress or the State Government of Pará.

Thus, even the future of this remarkable expansion is now questionable – and an area of over 62,960 square kilometers runs the risk of degazettement.

The importance of Brazil’s Conservation Units

According to Bernard and colleagues, Brazil’s trend in downsizing or degazettement of its PAs may have dire consequences when it comes to carbon emissions—and, thus, climate change.

“Their creation and maintenance sequesters at least 2.8 billion tons of carbon, conservatively estimated to have a value of US$48.3 billion,” the authors write. The carbon stock alone held by these areas alone is valued at $1.46 billion to $2.92 billion each year. In addition, more than two million tourists visit these conservation units in Brazil annually, which has an economic impact of nearly $1.10 billion.

The ultimate message of these studies is crystal clear: protected areas afford ecosystems services and economic benefits in a world with a shaky future – fulfilling the critical need to stem extinction and deforestation rates, and mitigate climate change.

As Bernard puts it, “the weakening of such networks due to PADDD events, such as those happening in Brazil and other parts of the world, compromises the capacity of these areas to deliver benefits that may be crucial in a near future.”