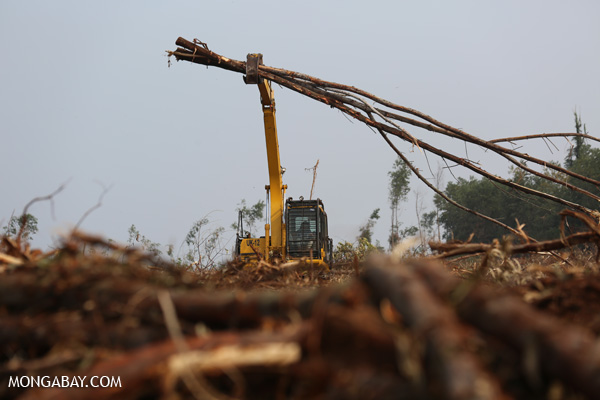 While Asia Pulp and Paper (APP) has made considerable progress on addressing social and environmental problems associated with its operations in Indonesia, the forestry giant still has much to do to rectify historic social grievances in China, says a report published by Landesa and Rights and Resources Initiative (RRI).

The report, titled Large-Scale Land Acquisition for APP Forest Plantations, looks at APP’s acquisitions of forest lands from the mid 1990s to the early 2000s in Guangxi and Yunnan provinces where it leased large blocks of collectively-owned forests for conversion to industrial eucalyptus plantations. The report finds that the principle of Free, Prior, and Informed Consent (FPIC) by local peoples was not applied in some areas, and that both APP and local regulators failed to abide by all laws governing land acquisition.

“Led by local government officials who were actively promoting industrial investment, farmers in APP’s acquired lands were forced to accept a blanket-government imposed annual rent below market price under what was apparently a compulsory acquisition program with no room for negotiation,” said RRI in a statement. “These local governments, eager to profit from lucrative investments, often ignore the countries’ own laws in courting international investors. The report discloses a disturbing pattern of APP-China’s past reliance on strong local government intervention to acquire rights to collectively owned land, rather than direct dealing with farmers and the community organizations through market transactions, despite the fact that under Chinese law, any transfer of rural land rights must be voluntary and free from compulsion through a written contract.”

While the report is critical of APP, RRI and Landesa note that the company “cooperated fully” with the researchers and is reviewing the problems. A statement issued by the groups included a comment from Aida Greenbury, APP’s managing director for sustainability and stakeholder engagement, noting APP’s intent to address the issues.

“APP recognizes that these are first steps and that, as with the wider Forest Conservation Policy, there is a longer journey ahead,” said Greenbury. “Throughout this process, the company welcomes feedback from stakeholders everywhere, and will publish regular updates on its progress.”

APP is not the only company with these kind of problems — appropriation of community lands by multinationals is widespread in China and beyond. But Andy White, Coordinator of RRI, says that companies are finally starting to recognize the risks with such practices.

“Sadly, these findings present yet another case where community land rights were abused by local governments’ devotion to the idea of quick-fix development, and the investors’ reliance on corrupt government officials to acquire land,” said Andy White, Coordinator of RRI. “APP’s recent pledges to address these issues in their land acquisition practices exemplify just how critical it is for investors to adopt better due diligence, and ensure that all their investments respect the rights of the people that live on these lands. Ignoring human rights in the course of commercial development has annihilated communities and their forests across the developing world, and is beginning to cost investors worldwide.”

“We appreciate APP’s seriousness in addressing these problems, as this recent commitment confirms that they want to remedy the actions that have harmed communities in the past. It is crucial for companies and investors across the board to understand that without the consent and respect of the people living on the lands they invest in it, no business model can succeed in the long term—however profitable the short-term results may be.”

APP pledges to restore forests, if given the opportunity

(03/18/2014) Over the past 20 years, Sumatra’s lowland rainforests have been destroyed at a virtually unmatched rate and scale. Since 1990, the island’s primary forests shrank by 40 percent while its overall forest cover declined by 36 percent, mostly the result of logging, agricultural expansion, and conversion for oil palm and timber plantations. What little forest does survive is often degraded — today less than 8 percent of Sumatra retains primary forest.

Is APP deal a sign of a changing forestry sector?

(02/15/2013) Asia Pulp & Paper (APP), one of the world’s largest paper companies, announced earlier this month that it will no longer cut down natural forests in Indonesia and will demand similar commitments from its suppliers. The announcement was received with guarded optimism by Greenpeace, Rainforest Action Network, World Wildlife Fund, and other NGOs who have waged a persistent campaign to change APP’s forest policies.