An impossible balancing act? Forests benefit from isolation, but at cost to local communities

The indigenous people of the Amazon live in areas that house many of the Amazon’s diverse species. The Rupununi region of Guyana is one such area, with approximately 20,000 Makushi and Wapishana people living in isolation. According to a recent study published in Environmental Modelling & Software, a simulation model revealed a link between growing indigenous populations and gradual local resource depletion.

The Makushi and Wapishana people depend traditionally on hunting, fishing, and subsistence agriculture in the Amazonian Guyana. They cultivate cassava and process it into flour for long-term storage. Animals also play an essential role in their lives, as some species are hunted for food while others are used for spiritual purposes. 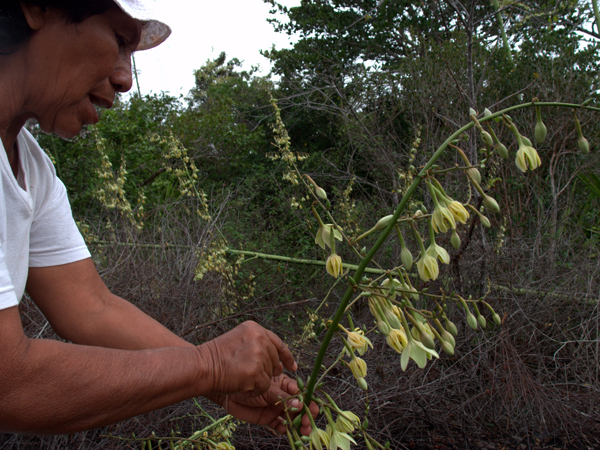 Previous studies evaluated the sustainability of indigenous communities through modeling to clarify how they contribute to local ecosystems. Information from these models could potentially help indigenous people design more sustainable livelihoods.

“Indigenous communities are vocal advocates of sustainable development and forest conservation,” states a report published in 2007 by Conservation International. Satellite images reveal that in comparison to neighboring non-indigenous areas that show evidence of major deforestation, much less damage is apparent on indigenous lands. But even then, some alteration to the ecosystem is inevitable. Jeff Luzar and Jose Fragoso, co-authors of the paper, collected field data for 3.5 years from 9,900 individuals in 23 communities, including factors such as the number of hunts per month, maximum animals hunted in one trip, and hunting success rate. With that they constructed a model replicating how a community reliant on hunting and subsistence agriculture evolves into one with larger-scale agricultural areas.

The simulation results showed that the emergence of a new community was associated with an eventual decline in the number of animals present in an area, species diversity, and carbon stock. This is due to the direct effects of hunting, as well as to the decline in available habitat. According to the simulation, the size of the killed animals gets smaller over time. To compensate for the reduced amount of energy provided, people cultivate more land in order to obtain more cassava flour. With more forest habitat converted for agriculture, the ecosystem thus supports fewer animals.

Eventually, however, the researchers found that as the difficulty of hunting tended to increase over time, fewer and fewer animal kills resulted. In addition, the rate of cultivation is eventually limited by the availability of natural resources. Together, these inhibit further population growth and consequential development and deforestation. Thus, under conditions without external influence, indigenous livelihoods can be sustainable.

However, impact assessments by Conservation International and other organizations suggest that the Rupununi region will undergo substantial deforestation due to government plans to improve infrastructure.

“Guyana has had major change since the introduction of Integration of Regional Infrastructure in South America (IIRSA) to promote the regional development and integration of rural and urban areas,” Iwamura explained. “We witness the booming market to attract Brazilians crossing the border to the Lethem, the frontier town near in the Rupununi.”

The Rupunini region remained mostly isolated since inadequately maintained dirt roads made the area almost inaccessible. However, there is a proposal under IIRSA to pave the dirt road running through Rupunini – one that connects agricultural areas in Brazil and Guyana’s capital. 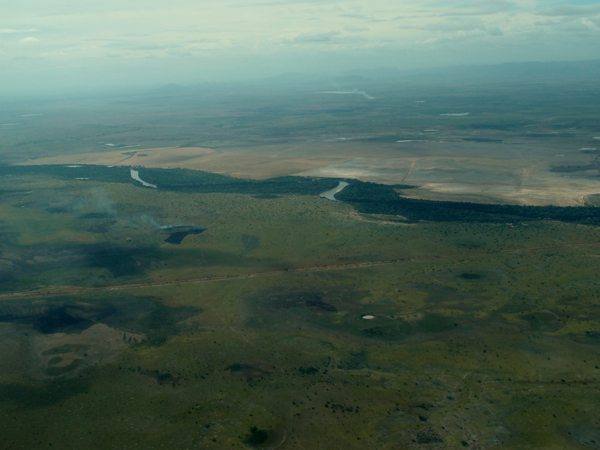 Boarder with Brazil is Rupununi river. The Brazil side of the river is completely deforested. Brazilians grow rice with mechanized agriculture and irrigation. Photo credit: Takuya Iwamura.

According to Iwamura, weighing the benefits and drawbacks of outside influence is a delicate balancing act.

“In the Rupununi or elsewhere, people need to react to external influences,” he said. “During our stay, I met many people who care about the influence from outside of their communities, but they also need food and medicine at the same time. In the future, I am interested in analyzing the human responses to conservation planning (e.g., establishment of protected areas) by applying similar social-ecological models.” 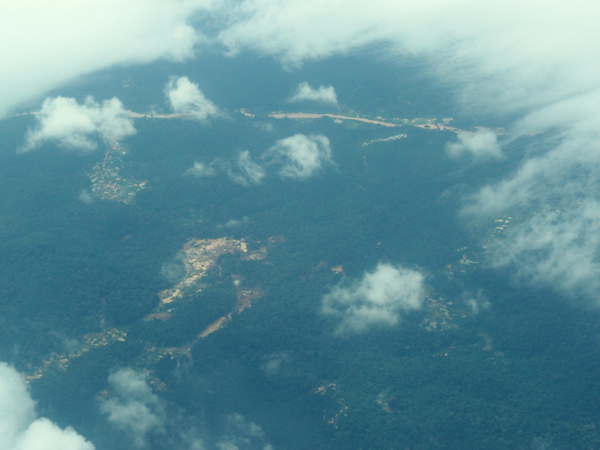 Another picture from the airplane. Small scale gold minings can be found many areas in the Rupununi which can attract both locals and foreigners. Photo credit: Takuya Iwamura. 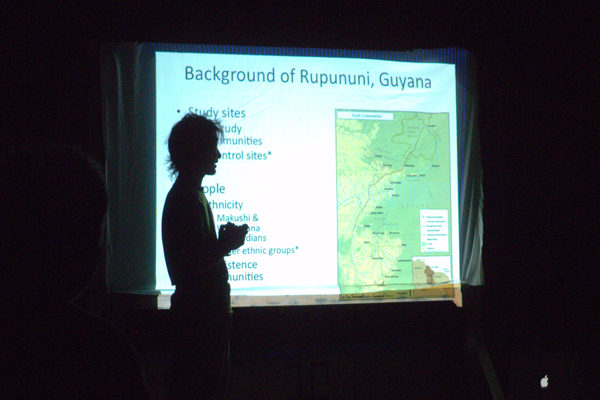 “We presented our results of our work to communities which supported our project. We brought a projector, a generator, and gasoline to run our show. People tend to understand video recording of simulation results than graphs,” explained lead scientist Dr. Takuya Iwamura. Photo credit: Takuya Iwamura. 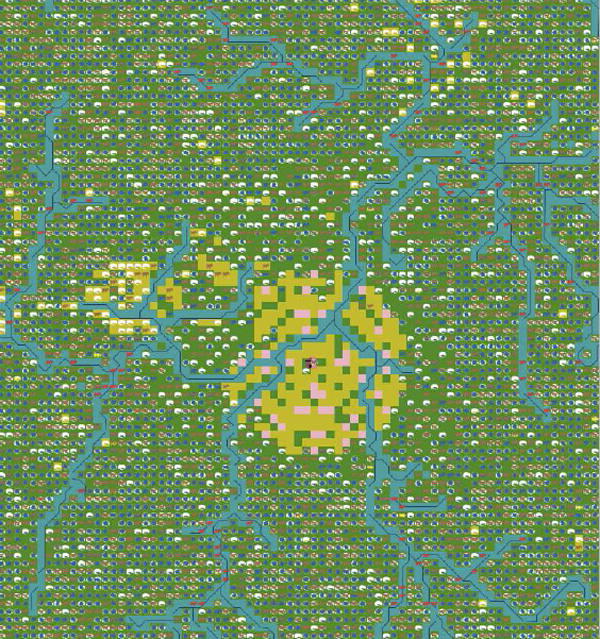 Expansion of cultivated areas. Simulation for 200 years time steps. The color of the cell represents the type of land cover (green: forest, yellow: grassland, blue: waterbody, pink: cultivated area). The village location is represented by the house like icon. The locations of populations for 10 animals species are indicated by animal icons. The spatial scale is 30 Ha for presentation purpose.