by Morgan Erickson-Davis on 9 October 2014

Less than 10 percent of Ecuadorian Chocó forest remains, many endemic species under threat from development, logging

A strip of rainforest running along the northwestern Ecuadorian coast and up through Colombia is one of the most biodiverse places in the world. Yet, less than 10 percent of Ecuador’s portion remains intact, with more forest lost every year to human development. But word came Oct. 7 that a little more has been saved for now, with a 500-hectare expansion of the Río Canandé Reserve.

The Chocó Biogeographical Region spans 100,000 square kilometers (38,000 square miles) in western Colombia and northwestern Ecuador. Listed by Conservation International as one of its original 17 Conservation Hotspots, the humid forests of the Chocó are home to many threatened species that are endemic to the region and found nowhere else in the world. For instance, the Chocó boasts the highest number of endemic bird species in the Americas, according to Dr. Jordan Karubian of the Center for Tropical Research. 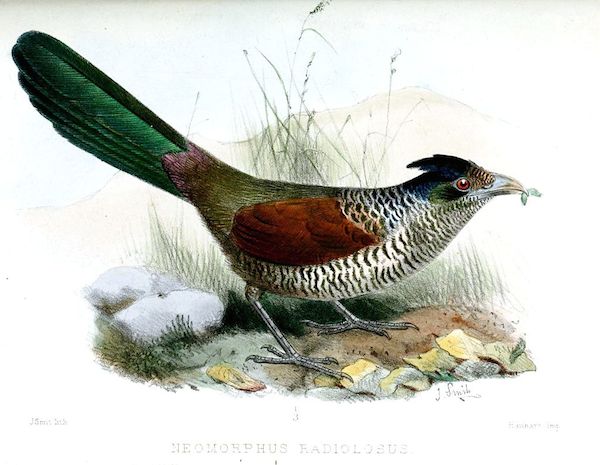 The banded ground cuckoo (Neomorphus radiolosus) is found only in the Chocó forests of Colombia and Ecuador. It is listed by the IUCN as Endangered.

The reason for the astounding diversity of the Chocó region, according to WWF, is the uprising of the Andes Mountains millions of years ago. The mountains acted as a barrier, isolating animals and plants in the coastal forests from those in the Amazon rainforest and allowing them to evolve into a wide array of new forms.

But many of the area’s unique species are under threat. Ecuador’s portion of the Chocó has experienced massive deforestation that continues to this day, with less than 10 percent remaining intact. Clearing of forest for timber, agriculture, and settlement development are the main drivers of Chocó forest loss.

According to data from Global Forest Watch, an area of northwestern Ecuador that includes the Chocó lost more than 100,000 hectares of forest from 2001 through 2012 alone, representing about 5 percent of its tree cover. However, the actual amount of forest loss may be a bit less since the harvesting of tree plantations is also lumped into the data. Still, the area is nearly devoid of large tracts of intact forest, with satellite imagery showing extensive clearing in many areas.

This map encompasses approximately two million hectares of tree cover, of which 119,000–or 5 percent–were lost from 2001 through 2012. The star indicates the location of the Río Canandé Reserve. Map courtesy of Global Forest Watch. Click to enlarge.

The Río Canandé Reserve marks the center of an important conservation zone in Ecuador’s remaining Chocó forest. It’s surrounded by other protected areas such as the Cotacachi-Cayapas Ecological Reserve, and is a stronghold for Chocó wildlife. It is the only known place where the endangered Mache glass frog (Cochranella mache) can be found, and is one of only two places in the world where a rare tree species (Ecuadodendrum acosta-solisianum) grows.

“This is an extremely important area for birds, with more than 360 species observed in the reserve,” said Benjamin Skolnik, Ecuador Program Director for American Bird Conervancy (ABC). “A host of those are threatened or near-threatened species, and several are large species that require expanses of intact forest habitat such as those provided though this expansion.”

In order to preserve what few expanses of intact forest are left, ABC teamed up with Fundación Jocotoco, Rainforest Trust, World Land Trust (WLT), and March Conservation Fund to buy properties adjacent to the reserve. In total, they purchased six plots amounting to about 500 hectares, bringing the total area of Río Canandé Reserve up to nearly 2,500 hectares.

“These additions are a remarkable conservation achievement in Ecuador,” said Rocio Merino, Executive Director of Fundación Jocotoco. “The expansion represents not only the protection of the habitat of the endangered Great Green Macaw, but also the possibility to connect the Río Canandé Reserve with other protected areas that will permit movement for big mammals, birds, primates, and other animals freely and away from hunters or other threats.”

However, while the additional 500 hectares are now officially protected, nearby outlying areas in the Chocó are still vulnerable to clearing. A plan to build a bridge over the Canandé River may put these forests and their wildlife at risk, with the consequential influx of roads making the area more accessible to logging outfits and developers.