Highly unlikely that global population will peak this century 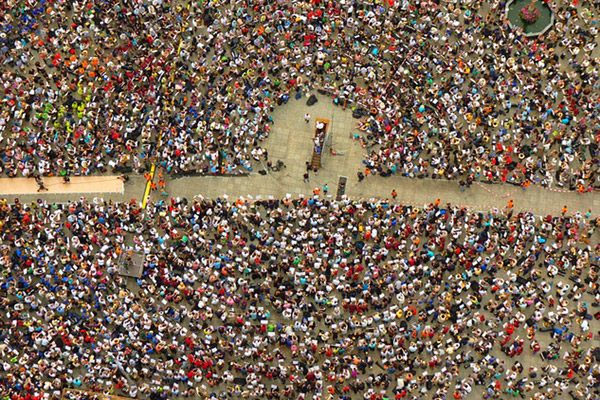 Crowd from above. Photo by: Public Domain.

By 2100, over 13 billion people could be walking the planet. That’s the conclusion of a new study published today in Science, which employed UN data to explore the probability of various population scenarios. The new study further demolishes the long-held theory that human population growth will quit growing by mid-century and then fall.

“Analysis of these data reveals that, contrary to previous literature, world population is unlikely to stop growing this century,” reads the paper.

It’s worth noting that 13 billion is at the very high end of the researcher’s projections and, therefore, unlikely, but hardly impossible. The scientists estimated that there is an 80 percent probability the global population fall somewhere between 9.6 and 12.3 billion in 2100, meaning there is a ten percent chance that population will be above 12.3 billion.

Going further, there was a 95 percent probability that the population will be between 9.0 and 13.2 billion, putting the chances of a population exceeding 13.25 billion at 2.5 percent.

The results follow a revision by the UN last year of population projections, which first reported that global population rates were not behaving as expected, due largely to stubbornly high fertility rates in Africa.

“What’s new is that we are able to quantify the confidence that underlie the projected population growth. Earlier projections were strictly based on scenarios, so there was no uncertainty,” explained lead author Patrick Gerland with the Population Division at the United Nation. “This work provides a more statistically driven assessment that allows us to say how likely particular outcomes are.” 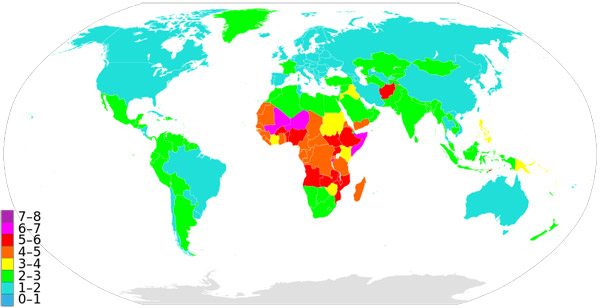 Fertility rate based on CIA Factbook 2014. The numbers on the left relate to how many children per woman. Photo by: Supaman89/Creative Commons 3.0.

So, the most likely scenario? Around 10.9 billion, which is a 55 percent increase over today’s current population.

Prior to recent revisions, many demographers believed global population would essentially take care of itself. Due to declining fertility rates, populations would peak somewhere between 2050 and 2100 before dropping slowly. Increasingly, experts say that’s no longer the case.

“Population growth was a major world concern up to the 1990s, but then fell down the world’s agenda in favor of other important issues such as climate change and the HIV/AIDS epidemic,” co-author Adrian Raftery with the University of Washington told mongabay.com. “This seems now to have been premature, especially as too rapid population growth can make other problems worse. There’s a need for the world to focus again on population issues and policies that can support families and governments in lowering fertility.”

Arguably leaving fertility off the policy table for a couple decades has led to the fact that Sub-Saharan Africa is still seeing incredible population growth, including a median family size of 4.6 children per woman and much of the continent lacking accessible contraception.

“[Africa’s] current population of about one billion is projected to rise to between 3.1 and 5.7 billion with probability 95 percent by the end of the century, with a median projection of 4.2 billion,” reads the paper. “While this is large, it does not imply unprecedented population density: it would make Africa’s population density roughly equal to that of China today.”

The implications of this population boom are many and variable, impacting everything from food production and climate change to jobs and economics.

Raferty agreed calling the study “a reason to renew a focus on policies that could accelerate fertility decline in high-fertility countries and so slow population growth.” 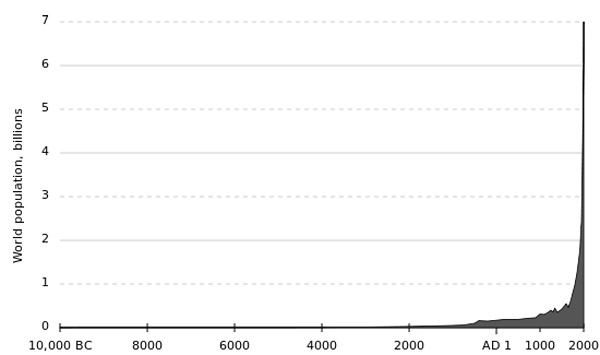 Human population growth over the last 12,000 years. Population has exploded since around 1500.

Still he added that dealing with a population around 12-13 billion “may be possible.”

“For example,” he said, “in the past 50 years world population has doubled, but world food production has more than doubled. So predictions then of widespread famine were not borne out.”

“We are already to a point where our population size is unsustainable,” lead author of the paper, Jeffrey McKee, told mongabay.com earlier in the year. “In other words, we are already beyond the point of the biological concept of ‘carrying capacity.'”

For decades, scientists have warned that the world may be entering a mass extinction crisis, not seen since the end of the dinosaurs.

Another paper published in Ecology and Society this year, looked at the many impacts of undiminished human population growth. The paper, authored by geographer Camilo Mora with the University of Hawaii, argued, among other things, that unrelenting population growth was one of the key trends exacerbating climate change, yet, this remains little discussed.

“In the United States, each child adds about 9,441 metric tons of carbon dioxide to the carbon legacy of an average parent, which is 5.7 times his/her lifetime emissions,” Mora writes in his paper. “Achieving a reduction of greenhouse gases will become increasingly difficult even under modest population growth rates given expected improvements in human welfare and expected increases in energy consumption.”

The key to slowing population growth, according to most experts, is no longer top-down, state-run population control. Instead it means greater education for women, easier access to family planning, and available contraceptives.

“What everyone has been advocating, and remarkable progress have been achieved (albeit still too slow in some countries) is a greater empowerment of families, and especially women and girls in deciding about their reproductive health and rights,” explained Gerland, adding that “policies to encourage a more rapid fertility transition should focus on increasing female education and investing in family planning programs. Large increases in GDP is not required for the effective impact of these investments on fertility.”

The human population has undergone a tremendous change in the past two hundred years. If we consider modern humans entering the global stage around 200,000 years ago, then for the first 99.9 percent of our history our population has been below one billion people. It’s only in the last 0.1 percent that it’s jumped from one billion to seven.

Booming populations, rising economies, threatened biodiversity: the tropics will never be the same

(07/07/2014) For those living either north or south of the tropics, images of this green ring around the Earth’s equator often include verdant rainforests, exotic animals, and unchanging weather; but they may also be of entrenched poverty, unstable governments, and appalling environmental destruction. A massive new report, The State of the Tropics, however, finds that the truth is far more complicated.

(06/26/2014) It took humans around 200,000 years to reach a global population of one billion. But, in two hundred years we’ve septupled that. In fact, over the last 40 years we’ve added an extra billion approximately every dozen years. And the United Nations predicts we’ll add another four billion—for a total of 11 billion—by century’s end.