Towards the poles: tropical cyclones on the move

If you thought your relatively northerly or southerly location sheltered you from Mother Nature’s worst storms, think again

For years we have known that the tropics are expanding towards the poles. However, there is something decidedly destructive accompanying that shifting warm weather: tropical cyclones.

In a recent study led by Dr. James Kossin from the NOAA National Climatic Data Center, researchers discovered that cyclones are reaching their maximum intensity farther towards the poles than before. On average, these storm systems have been peaking in intensity towards the north and south poles at a rate of 53 and 62 kilometres (33 and 39 miles) per decade respectively.

The researchers unexpectedly came upon this while they were studying something else: the upper-atmosphere temperatures above tropical cyclones.

“The poleward migration of the tropical cyclones was something we stumbled on…” Kosin said. “We kept seeing a trend that we couldn’t explain unless the storms themselves were migrating away from the deep tropics. This did surprise us at first, but after looking at how the environment has been changing over the past few decades, it makes good physical sense.”

Part of this environmental change has to do with the deep tropics becoming increasingly hostile to cyclone formation, while its expanding edges turn into benign grounds for them.

The causes for these are still unknown. However, they are linked to climate change, which the scientists tentatively connect with human activities such as stratospheric ozone depletion, increasing greenhouse gases, and particulate pollution.

Disruption on a global scale?

And what of the effects of this trend? Although whether it is good or bad depends on whom you ask (and where), it does not bode well for the majority of Earth’s inhabitants.

Regions close to the equator could see a decreased risk in cyclones while areas farther away need to prepare themselves for more powerful storms. That being said, parts of the world that traditionally rely on cyclone rainfall to renew freshwater sources may come to experience water shortages. Overall, Kossin noted that the status quo cannot be maintained, and that this will be typically disruptive to societies. 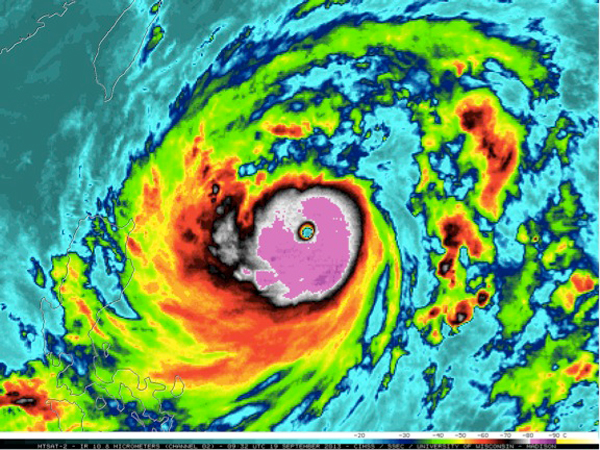 Color-enhanced infrared satellite image of Typhoon Usagi in 2013 as it moved northwest toward Hong Kong while explosively intensifying to a Category-5 storm. Photo by the NOAA Cooperative Institute for Meteorological Satellite Studies

So what is next? According to Kossin we should view this as strong evidence that humans can and do impact the behavior of extreme weather events, which can dramatically affect mortality and risk.

From a scientific point of view, he and his colleagues are already trying to decipher the underlying causes and effects of this weather phenomenon.

“Given the motivation and relevance to society, we hope others will do the same,” Kossin said, highlighting the need for more research to understand this global trend.

Next big idea in forest conservation? The ‘double-edged sword’ of democracy

(07/03/2014) Dr. Douglas Sheil considers himself an ecologist, but his research includes both conservation and management of tropical forests. Currently teaching at the Norwegian University of Life Sciences (NMBU) Sheil has authored and co-authored over 200 publications including scholarly articles, books, and popular articles on the subject.

(12/18/2013) Last month was the warmest November on record, according to new analysis from the NOAA. Temperatures were 0.78 degrees Celsius (1.40 degrees Fahrenheit) above the average November in the 20th Century. Global temperatures are on the rise due to climate change caused primarily by burning fossil fuels, but also by deforestation and land-use change.