The largest biosphere reserve in Southeast Asia: Vietnam’s success story or a conservation failure? PART I

This is the first of a series of two articles examining Western Nghe An Biosphere Reserve, the impetus behind its creation, and the efficacy of its protections. Part II can be found here.

In 2010, poachers shot and killed the last Javan rhino in Vietnam, wiping out an entire subspecies. The Sumatran rhino, the Malayan tapir and the civet otter, too, have disappeared from the country. Moreover, charismatic species like tigers, elephants, gibbons and the secretive saola discovered recently in Vietnam’s forests are at risk of extinction in the coming decades as threats to wildlife continue unabated in the country.

The thirteenth-most populous country in the world, Vietnam also has one of the highest GDP-growth rates among Southeast Asian countries. In addition, it is a major hub for consumption and supply of wildlife-related products. It is thus no wonder that Vietnam has been fast depleting its forest resources. According to Global Forest Watch data, the country lost almost 1.2 million hectares of tree cover between 2001 and 2012. 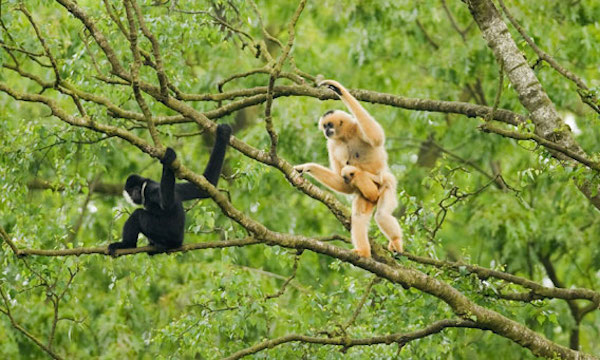 Northern white-cheeked crested gibbon (Nomascus leucogenys), in Vietnam. In this species, the females are golden and the males are black. They are listed by the IUCN as Critically Endangered. Photo by Terry Whittaker.

To protect Vietnam’s rich biodiversity, the government has established over 100 protected areas till date. In addition, Vietnam joined UNESCO’s World Network of Biosphere Reserves (WNBR) in 2000. The WNBR consists of a network of sites called Biosphere Reserves, aimed at integrating people and nature for sustainable development. So far, UNESCO has designated eight such voluntary Biosphere Reserves in Vietnam. The Western Nghe An Biosphere Reserve, designated in 2007, is the largest of these reserves.

While Western Nghe An was recognized as a biosphere reserve in 2007, it was only in 2011 that the Nghe An People’s Community officially accepted UNESCO’s recognition.

Talking to “Voice of Vietnam” (the country’s national radio broadcaster) in December 2011, Nguyen Thanh Nhan, the Director of the Pu Mat National Park said, “Why did we wait until now to declare the UNESCO recognition? First, we wanted to make the entire community aware of the fact that it requires a long process to gain this recognition. Second, the time is now ripe for the declaration. Since its recognition in 2007, any activities relating to the Western Nghe An Biosphere Reserve have received serious interest from the provincial People’s Committee and relevant agencies. We understand that the recognition brings an honor and a brand name, but what we must focus on now is how to sustain this brand.”

A “brand name” would also increase investment in biodiversity research and improve biodiversity conservation in the region, Nhan added in the radio interview. But has it?

Between 2011 and 2013, the Western Nghe An Biosphere Reserve suffered a net loss of about 4,000 hectares of tree cover, according to data from Global Forest Watch. In addition, media continues to report increasing depletion of forests and an increase in the consequent human-wildlife conflict. 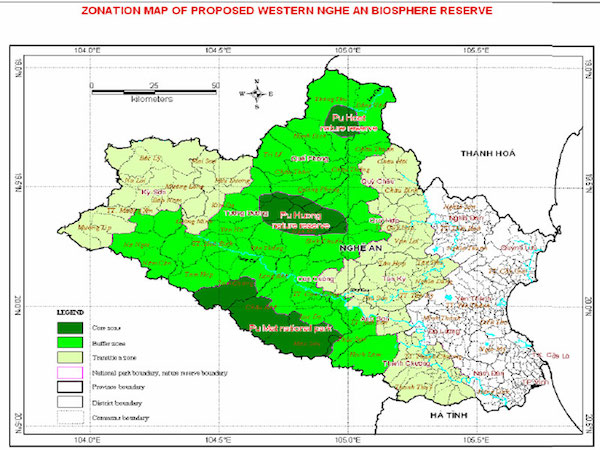 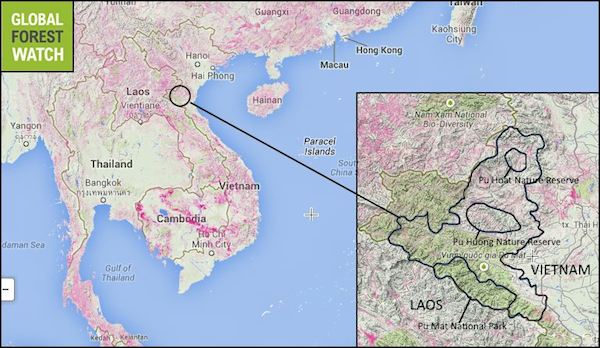 Western Nghe An lost more than 40,000 hectares (ha) of land between 2001 and 2013–or about 3 percent of its forest cover. Of that, approximately 25,000 ha were lost since the region was designated as a UNESCO biosphere reserve (2007-2013) and 4,000 ha were lost since acceptance of the designation by local communities (2011-2013). Pink represents forest loss, with forest defined as areas with tree cover greater than 10 percent. Map courtesy of Global Forest Watch. Click to enlarge.

Depletion of forests is a major threat to Vietnam’s primates. The country has six species of gibbons that occur in small, isolated populations and are under constant threat of being driven to extinction. Each of these six species is currently listed as Critically Endangered or Endangered by the IUCN. In fact, Vietnam has some of the world’s rarest gibbon species, such as the eastern black crested gibbon with just about 100 individuals remaining in the wild.

The northern white-cheeked crested gibbon (Nomascus leucogenys), too, is a critically endangered species of gibbon, endemic to Vietnam, Laos and China. Almost extinct in China, fewer than 190 small groups of the gibbons currently occur in Vietnam, according to a 2010-2011 population estimation survey by Conservation International (CI) and Fauna & Flora International (FFI).

A major stronghold for these gibbons in Vietnam is the Pu Mat National Park. There, surveys found that of the 190 northern white-cheeked gibbon groups, 130 groups (with approximately 455 individuals) were found in Pu Mat. Surveys in Pu Huong and Pu Hoat Nature Reserves revealed dismally low numbers – only around 7 and 12 groups respectively.

Most of these gibbons are currently restricted to higher elevations along the Laos border. Unlike the lower elevations that face greater hunting pressures and loss of habitat, higher altitudes confer the gibbons some natural protection, according to a report by CI and FFI.

So has the declaration of the Western Nghe An Biosphere Reserve improved protection for these threatened primates? Not yet, some conservationists think.

“The declaration of the Biosphere Reserve alone does not mean that protection in the area has been improved significantly, and that forest exploitation like hunting or logging is completely eliminated,” said Ulrike Streicher, a wildlife veterinarian who has worked with primates in Vietnam. “Only if these activities are controlled, the gibbons will benefit from the Biosphere Reserve.”

Nguyen Manh Ha, a conservationist at the Center for Natural Resources and Environmental Studies at Vietnam National University, agreed. “The biosphere actually contributes nothing, or very little. The biosphere is just a ‘title,’ and is not recognized as an official protected area system in Vietnam,” he said. “And a ‘title’ without investing appropriate resources is not going to be effective.”

While Pu Mat is one of the largest remaining blocks of forests in Vietnam with the biggest population of northern white-cheeked crested gibbon, the gibbons within Pu Huong and Pu Hoat Nature Reserves remain isolated and are not connected to the Pu Mat populations. In addition, despite the legal protection of these forests, gibbon species in this region are under severe threat, according to Streicher. With no strong law enforcement, illegal deforestation continues despite the declaration of the area as a Biodiversity Reserve.

“The Western Nghe An Biosphere Reserve borders large forest tracts in Laos, and if it is protected well, if the forests within it are connected by corridors and if transboundary conservation can be achieved, it will play an critical role as a refuge for wildlife populations in this region,” she said.

Streicher added that for the Biosphere Reserve to be effective, sufficient funds must be made available to ensure the establishment, boundaries and various regulations of the reserve and deploy appropriate staff to enforce them.

(07/11/2014) Growing coffee in the shade of forests allows native vegetation to persist, thereby reducing the impact of agriculture on the natural landscape. While production of shade-grown coffee surged in recent decades, it is now experiencing a decline. A recent study analyzed the situation, finding that the growth of consumer demand and changes in coffee agronomy has caused coffee production and management to change drastically.

(06/25/2014) Restricted geographic ranges, high habitat specificity, and small local population sizes all contribute to the natural rarity of many tree species. Anthropogenic activities such as selective logging can compound this rarity by modifying habitats and altering the competitive balance among tree species. According to a new study, previous logging in the forests of Vietnam continue to put rare tree species at risk.