by Morgan Erickson-Davis on 30 September 2014

Arrest represents crackdown on poaching that claims 1,500-1,800 elephants per year

On Monday, September 22, two ivory poachers were arrested in Mozambique during a late-night raid near Niassa National Reserve. The arrest followed on the heels of nearly two-dozen reported kills in the reserve in just the first two weeks of the month.

Poaching of elephants (Loxodonta africana) is a mounting problem across Africa, where an estimated 25,000 are killed every year by hunters who use high-caliber rifles, hide spikes in the underbrush, and poison watering holes. In Mozambique alone, between 1,500 and 1,800 elephants are slaughtered for the black market ivory trade annually, according to WCS, which describes the trend as a “national disaster” that could wipe out the country’s elephants in less than ten years. 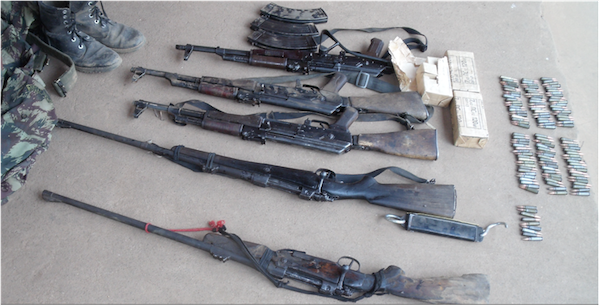 Guns seized in the arrest of two ivory poachers. Taking guns out of circulation is a crucial part of saving elephant populations in Mozambique. Photo credit: Wildlife Conservation Society

Ivory from elephants poached in Mozambique has been tracked by WWF to markets in Hong Kong and Taiwan. Mozambique has been criticized by CITES as being lax on anti-poaching enforcement, with poaching not even considered a crime until recently and offenders unable to be charged with anything more than illegal weapons possession.

A new law passed in June bolsters punishment for poaching. Under it, an offender faces high fines and up to 12 years in jail–but it does not go into effect until the end of 2014. Another passed recently also ups fines and jail time, and will be applied to this week’s arrests. 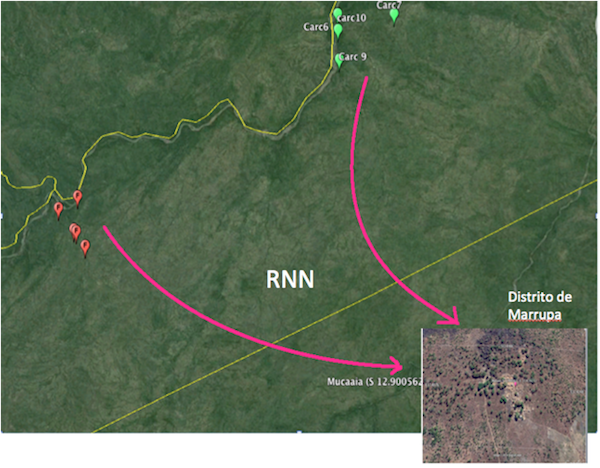 Conservation partners working with the Government of Mozambique to protect the country’s elephants are using high-tech methods to track poaching incidents and zero in on poachers. This map from Google Earth shows two clusters of poached elephant carcasses found by scouts and police inside the Niassa National Reserve. The arrows represent footpaths leading south and out of the reserve. Credit: Google Earth 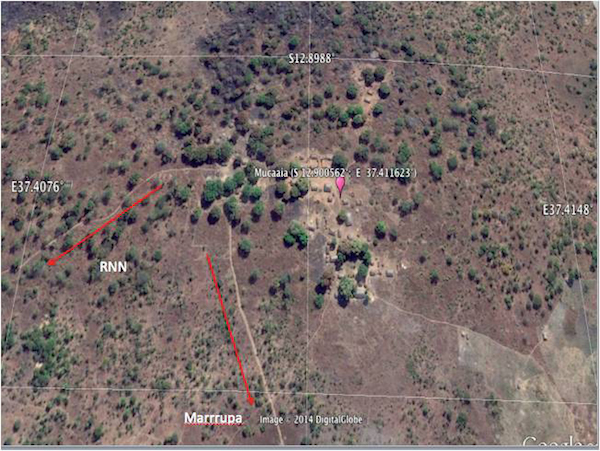 A Google Earth search along these lines revealed a small “machamba” (small farm with a few huts). The image also showed clear vehicle tracks coming out of this machamba and heading toward the district capital of Marrupa. This triggered the interest of the joint force members and follow up. Photo credit: Google Earth

The arrest was made by a joint effort from the Wildlife Conservation Society (WCS) and the Ministry of Tourism, along with a new branch of police charged with enforcement of environmental policies. Police also seized five illegal firearms including three AK-47s.

The event represents a government crackdown on organized poaching, and is the second enforcement victory in September. The arrest happened near one of the last remaining elephant strongholds in the country.

“The elephant poaching crisis in northern Mozambique is dire. We are losing two elephants per day to organized criminals who are negatively impacting governance and security across the whole region. This renewed commitment from the government of Mozambique to tackle this crisis, to stop the poaching and clean up the illegal firearms and illegal use of firearms and ammunition, is encouraging,” said Alastair Nelson, Director of the WCS Mozambique Program.

“The enforcement partnership between the Government, WCS, Luwire, and other private tourism operators has scored another victory in the fight against poachers in the country’s largest protected area with 70 percent of its elephant population,” Nelson said.