by Morgan Erickson-Davis on 19 September 2014

Since the baiji was declared extinct in the early aughts, the vaquita has taken its unenviable position as the world’s most threatened cetacean. The tiny porpoise currently numbers around 100, with accidental entanglement in gillnets primarily responsible for its decline. In response, the IUCN recently issued a statement calling for immediate action to curb vaquita bycatch and head off its extinction – which otherwise may lie just around the corner.

The vaquita (Phocoena sinus) – Spanish for “little cow” – exists solely in the Gulf of California, with the last population pushed up against the confluence of Baja California and the U.S. mainland. It is the smallest cetacean species in the world, ringing in at between 65 to 120 pounds (30 to 55 kilograms) – or about half the size of a St. Bernard. The vaquita is largely solitary, prefers shallow water, has a life-span of up to 20 years, and since 1996 has been listed as Critically Endangered by the IUCN.

Vaquitas (Phocoena sinus) are more solitary than other cetacean species, but are sometimes found in small groups.

From a census of 600 to 800 individuals in the 1990s, the vaquita has dropped off precipitously due to fishing in the region. Scientists attribute its decline specifically to one target fish species in particular, the totoaba (Totoaba macdonaldi), which is caught in gillnets and sold illegally overseas to Chinese markets where its bladder fetches high prices.

Vaquitas often come into contact with gillnets, in which they may become entangled. Unable to swim to the surface to breathe, they often drown before fishermen retrieve the nets. A study published in Conservation Biology 2000 estimates between 38 and 84 vaquitas were killed per year by boats from a single port, representing up to 15 percent of the entire species as of the most concurrent census in 2002.

Only around 100 vaquitas are thought to remain, according to a report by the International Committee for the Recovery of the Vaquita (CIRVA). Because of this, the IUCN Species Survival Commission Cetacean Specialist Group (CSG) submitted a statement at the 65th Meeting of the International Whaling Commission (IWC) earlier this month to attract attention to the species’ dire straits and catalyze conservation action.

“Extinction will occur within the next few years unless gillnet fishing is completely suspended in the Exclusion Zone recommended by CIRVA without delay,” said Justin Cooke, CSG member and Official IUCN Observer to the IWC, “Because of the high‐value illegal international trade in Totoaba, the main target of part of the gillnet fishery, strict enforcement is required.” 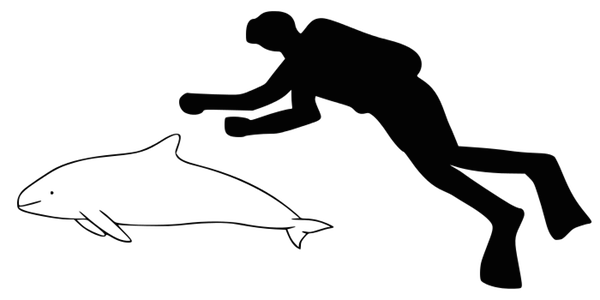 About the size of a large dog, the vaquita is the smallest cetacean in the world. Establishing a captive population is not being considered at this point, according to the IUCN. Image by Chris_huh.

The IUCN and CIRVA recommend U.S. and China governments try harder at stymieing the already-illegal totoaba trade, and scaling up fishing technologies that are safe for vaquitas. In addition, they propose the implementation of an Exclusion Zone in which all gillnetting would be illegal.

In addition to gillnet bycatch, vaquitas may also be threatened by inbreeding depression as their numbers decline, and by a changing environment as the flow of the Colorado River into the Gulf of California is increasingly diverted to U.S. cities. But for now, local fishing to feed international demand is by far the biggest threat to the survival of the vaquita, and it remains to be seen whether enough change will happen in time to save Mexico’s “little cow.”

(09/05/2014) The population of blue whales in the Eastern Pacific has recovered to 97 percent of historic levels decades after Earth’s largest animal was nearly driven to extinction in some places due to the whaling industry, reports a new study published in the journal, Marine Mammal Science.

(07/15/2014) Conservationists are celebrating the announcement that UNESCO has dubbed Argentina’s Península Valdés a biosphere reserve under the Man and Biosphere Program (MBA). A hatchet-shaped peninsula that juts out into the Southern Atlantic Ocean, the world’s newest biosphere reserve is home to a hugely-diverse collection of both terrestrial and marine wildlife.