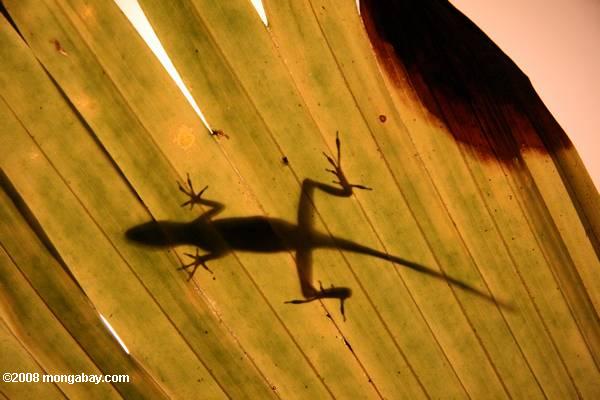 An anole lizard silhouetted on a rainforest leaf. Photo by Rhett A. Butler.

The biggest factor determining species diversity and distribution on islands is not size and isolation, as traditional island biogeography theory states, but economics. Simply put, the more trade an island is engaged in, the more boats visit it, and with more boats comes more hitchhikers.

A study published in Nature this week examines the species distribution of Anolis lizards throughout the Caribbean islands, finding that their pattern of colonization is exactly the opposite of what traditional island biogeography theory would predict.

“When I was first looking through the results, one of the most striking patterns was the complete reversal of the direction of the relationship between the number of new colonists and island geographic isolation,” lead author Matthew Helmus of VU University in Amsterdam told Mongabay, “The relationship is strongly positive, the most geographically isolated islands are those gaining the most exotics.”

The reason for this, Helmus believes, is the ease of travel in today’s modern world. Throughout history, the only way an adventurous lizards could get to outlying islands would be to catch rides on the flotsam and jetsam drifting in the ocean until they randomly happened to make landfall. Those islands farther away were harder to reach, and therefore got fewer recruits inhabiting them. As a result, more isolated islands would be colonized less frequently.

But, while anole distribution may be increasing, diversity may be suffering. In the past, isolated populations of anole would evolve into distinct species in response the particular niches available on a particular island. Now, however, these globe-trotting lizards are being spread more randomly as species from a wide range of areas are imported onto islands. The new arrivals are able to fill vacant niches on isolated islands with very little competition pressure to alter their species.

“Humans have shifted the system from one dominated by speciation to one dominated by colonization. From a system where each island had uniquely evolved species adapted to the habitats of their islands, to one where while every island has more anoles, they are all the same anoles,” Helmus said. 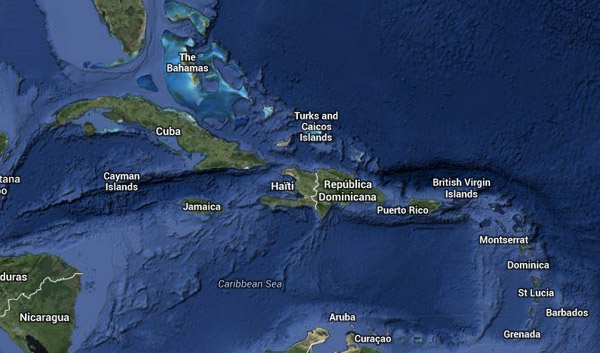 Although the anthropogenic re-distribution of anoles is an interesting case study, the movement of these already ubiquitous lizards likely won’t cause ecosystem collapse. However, they may not be the only species moving along global shipping channels.

“In those shipments there might also be crop pests, pathogens, venomous snakes and spiders, ants or other species that can do a lot of damage.” Helmus warns that anoles may be highly indicative of how other more invasive species also spread. Therefore, the findings suggest that as an island becomes more economically active, closer attention must be paid to quarantine regulations and sanitation procedures to minimize the transfer of pests.

Meanwhile, just as we can no longer model climate systems without including human influences, future biogeographic modeling must too include the anthropogenic forces that shape species movement and distribution. Welcome to the Anthropocene.